Maybe you are familiar with Linh Quy Phap An pagoda appearing in the music video Lac Troi of singer Son Tung MTP? But did you know that there is an equally beautiful temple in Bao Loc, which is Di Da pagoda?

Some information about Di Da pagoda

Di Da Pagoda is located at Village 6, Loc Tan Commune, Bao Lam District, Lam Dong Province. It is about 30km from Bao Loc city. This is also known as a village of the Chau Ma ethnic group with the name Dang Dung. So the pagoda is also called by local people as Dang Dung Pagoda. 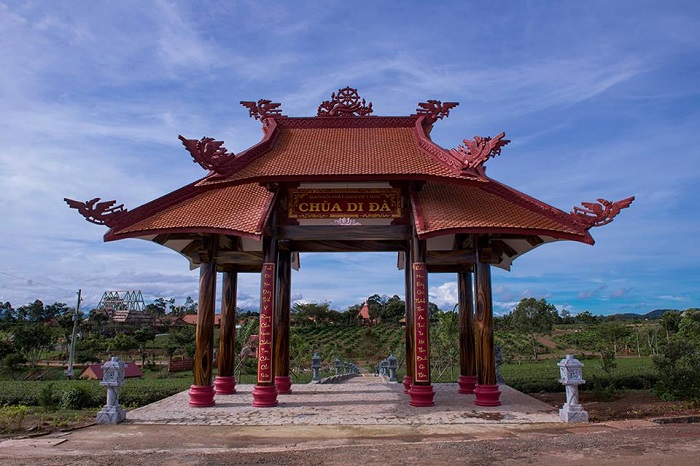 To get to the temple, ask for directions towards the Damb’ri waterfall from the city center. Next, pay attention to the signboard and turn right to the United Kingdom and go straight along the red dirt road for about 5km, you can reach Dang Dung Pagoda. On the way you can visit the wonderful landscapes such as Damb’ri waterfall, Tam Duong tea farm, Thinh Thai, … 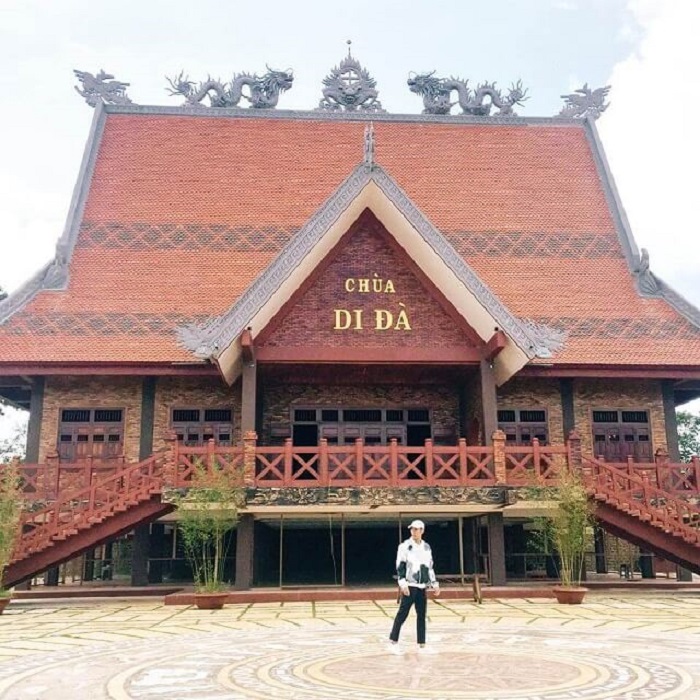 This temple was built in 2005 with an initial area of ​​up to 13ha. This is the largest unique Buddhist architecture in Bao Loc, a combination of Chau Ma style and traditional Tay Nguyen architecture. In addition, this place is also a place for activities and practices of Buddhist colonies from ethnic groups in the region.

The first impression of any visitor when coming to the temple is the green tea hills. Known for its traditional tea farming, immense tea fields have covered the entire campus of Di Da pagoda . The gate of the pagoda is built in a three-door way with 3 doors made up of 4 yellow pillars. Above is the red brick roof shaped like the communal houses in the Central Highlands. On the way to the temple gate, you have to step up the golden stone steps, along the two sides are the very beautiful lights and caves. 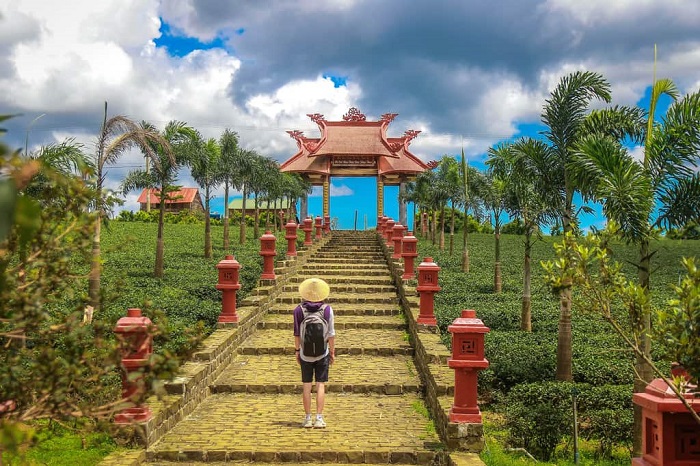 Going deep inside the temple is a large campus decorated with many small landscapes, lotus lakes and unique works. From the temple entrance, right to the left you will see a large lake with a unique red shrine. Looking at this temple, you will definitely immediately think of the famous One Pillar Pagoda in Hanoi capital. To go to electricity, you will have to go through a small wooden bridge that is extremely rustic and simple. 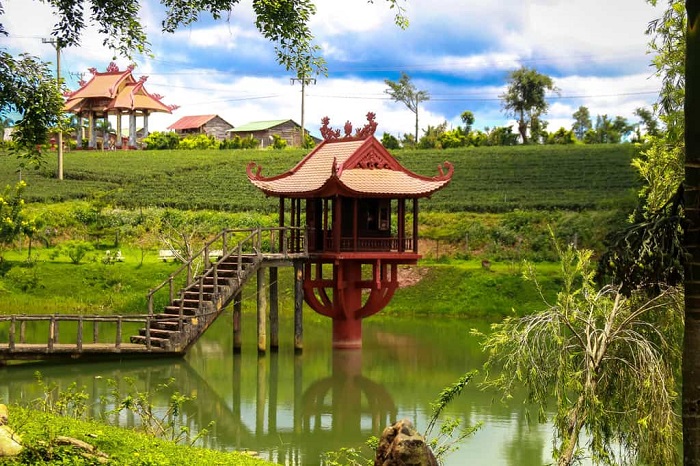 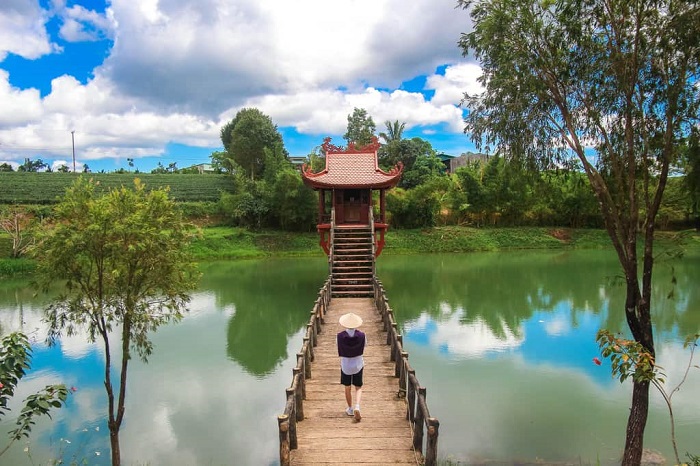 The electric exit is a simple rustic wooden bridge

Nearby is the temple hall itself. The way to the main hall is placed with two large elephants facing each other, extremely majestic. This is also a symbolic animal for the Central Highlands culture. In front of the main hall is a large yard decorated in a circle in the middle with the same motifs as Dong Son bronze drums. The main hall is the main red color, built in the style of a unique Rong house with soaring roofs. At the top, there is a combination of decorative motifs “two long chauding moon” which are extremely popular in the Vietnamese temple architecture. 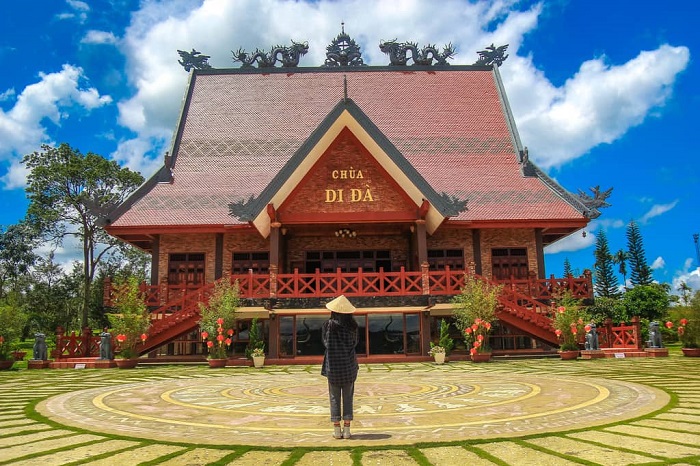 The Central Highlands people believe that the Rong house is the most important place in the village. According to the local people’s conception, this is the place where heaven and earth gather to protect the whole village. The Rong house is pride, glory and pride bring great spiritual value. Perhaps that is why the main hall was built according to the Rong house architecture, but still harmoniously combined with the familiar images of the Vietnamese people. 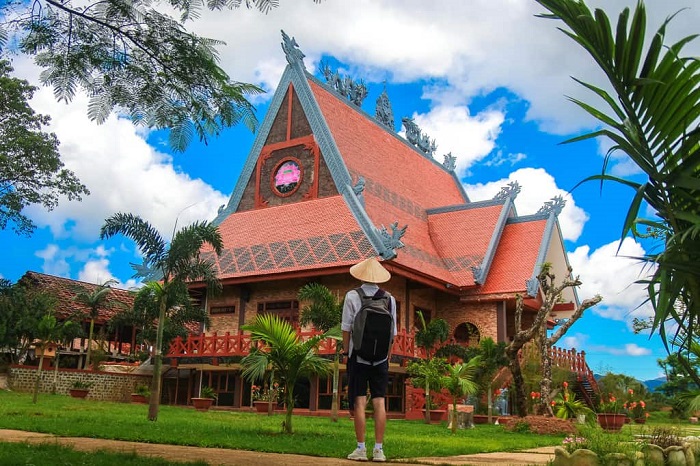 Another extremely beautiful angle at the main hall

Not only that, the works here are also decorated in a sophisticated and meaningful way. Visitors will often encounter motifs such as cranes, flying phoenixes, phoenixes, or patterns bearing the national culture in general, as well as the culture of the Central Highlands in particular. Behind the pagoda is a street visitor, a street boy for Bao Loc tourists to rest while visiting. 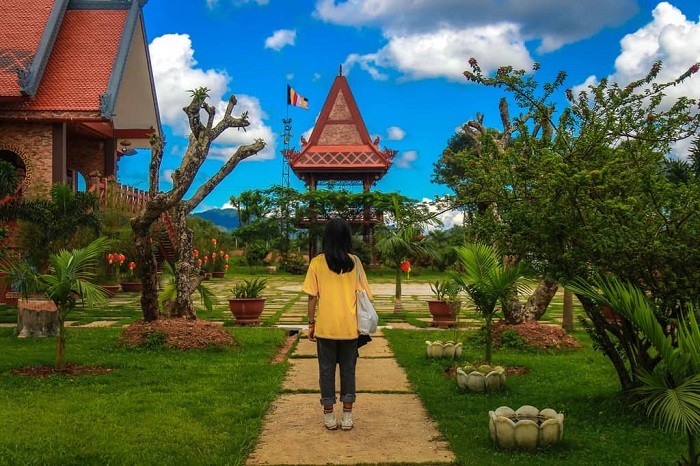 The scene of the temple campus 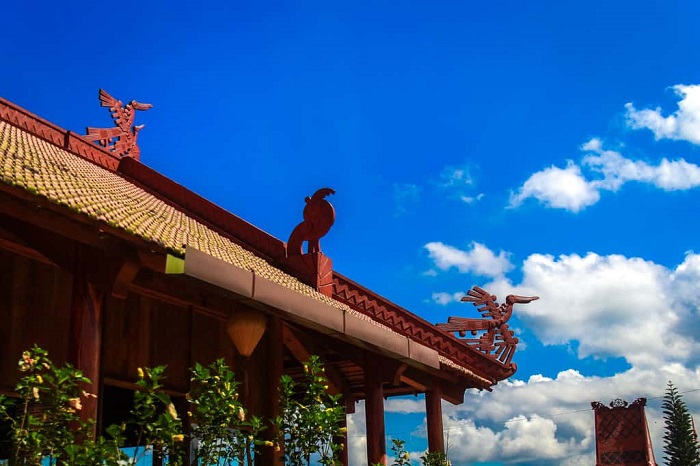 The image of a Vietnamese traditional crane

The temple campus is designed with grass paths, ornamental plants, lakes, Buddha Amitabha statue, Bodhisattva statue, Buddha Shakyamuni under the bodhi root, … All make you are like lost in a fairy tale place, bringing peace and tranquility. 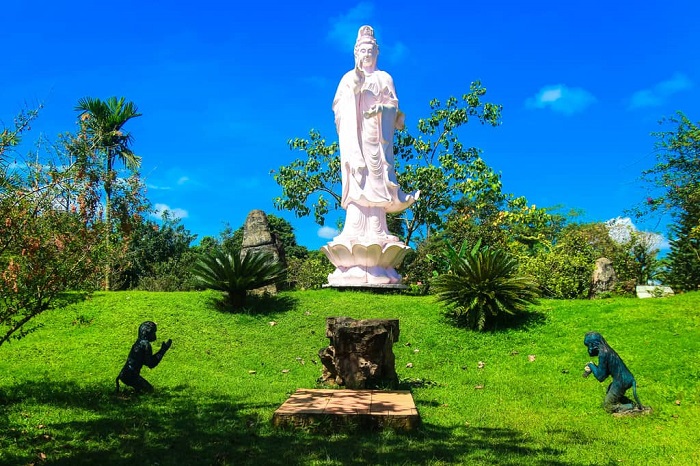 Located in the key tourist area of ​​Bao Loc city, from Di Da pagoda you can easily visit and explore the beautiful surrounding landscapes.

Dambri waterfall is the largest waterfall in Bao Loc with a majestic height of up to 60m and a width of up to 30m. Dambri possesses a wild beauty that is strangely attractive. Standing from the temple, you can watch the Dambri waterfall from afar, listen to the rumbling waterfall forming a misty and cool air creeping through the forests. 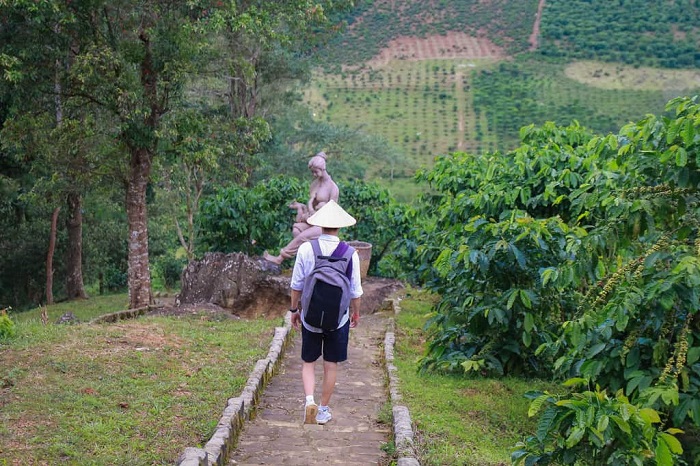 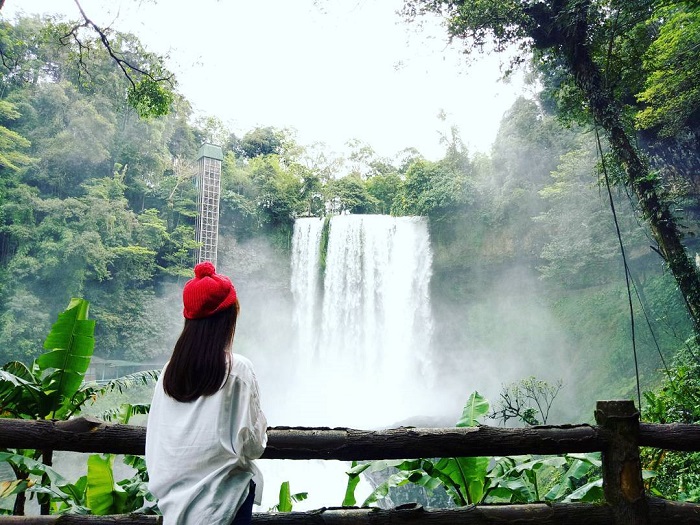 The scene of Dambri waterfall is majestic but no less poetic

From Di Da pagoda , you can follow the road behind the pagoda to visit Tam Hop waterfall. Passing the pristine stone steps, two wooden bridges spanning a small stream to dense primitive forests, you will see this interesting destination. True to its name, Tam Hop waterfall is made up of 3 large streams of water falling from a height of up to 70m, creating an extremely magnificent scene. Surrounding the waterfall is covered with trees and the chirping of birds creating a very airy and fresh natural space. 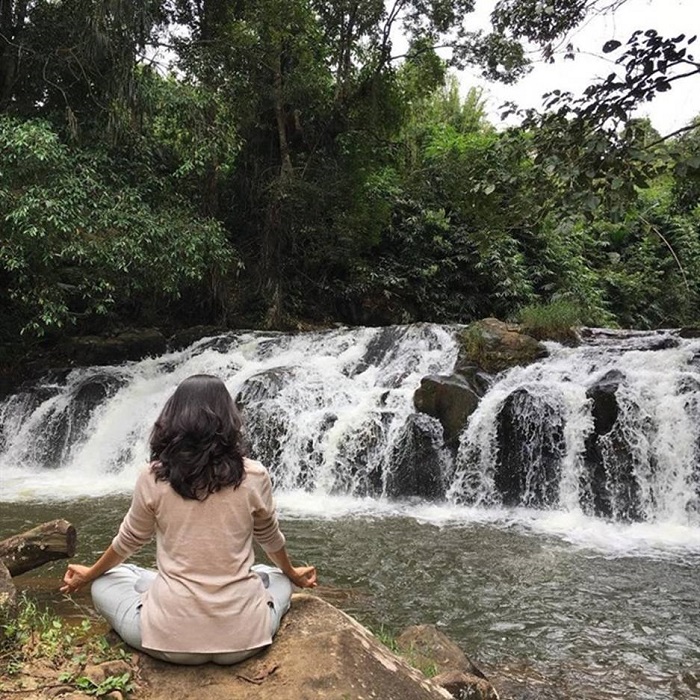 Coming to Tam Hop waterfall, you will be blended with fresh nature