In addition to the temple of King Hung in the Botanical Garden, which is a classified monument, the city also has the largest memorial temple in the South.

King Hung Temple is located next to the Thao Cam Vien ticket booth (District 1, Ho Chi Minh City), built by the French in 1926. Its original function was to commemorate Vietnamese soldiers who died fighting for French soldiers in the World. war one.

After 1954, when the French withdrew from Vietnam, the building was renamed Quoc To Hung Vuong Temple. In particular, in addition to worshiping King Hung, there are also a number of other historical figures such as Tran Hung Dao, Ta Quan Le Van Duyet. After 1975, the temple was changed to Hung Vuong temple and assigned to the Vietnam History Museum – Ho Chi Minh City for direct management.

The temple has a square-shaped, architectural style of the Nguyen Dynasty with a set of matches-stacked roofs, forming three curved floors. In general, the project hides the Ming long court of Minh Mang mausoleum in Hue.

Every week, the temple is open free of charge to visitors from Tuesday to Sunday. The anniversary of Hung Vuong’s death anniversary is on March 10th of lunar year every year, there are incense offering ceremonies. 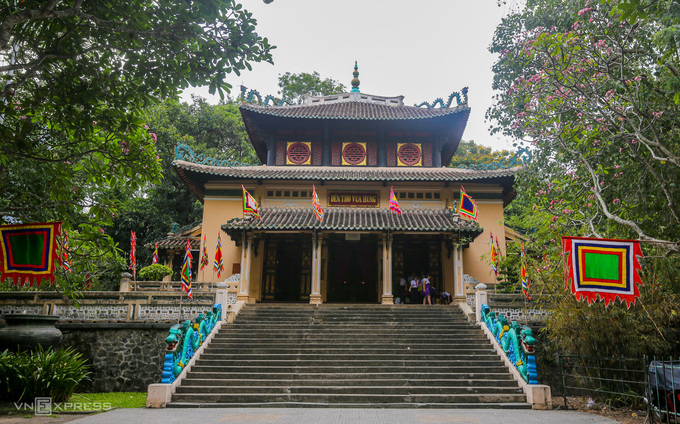 In 2015, the People’s Committee of Ho Chi Minh City ranked the city-level historical-cultural relic for this project. Photo: Quynh Tran

The memorial of Hung Kings is located on a hill more than 20 meters high in the 400-hectare National Cultural and Historical Park (Long Binh Ward, District 9), about 30 kilometers from the center of Ho Chi Minh City.

The work was completed in 2009. The memorial temple includes 4 main parts: square, bamboo road, temple and courtyard. At the entrance to Hung Temple is a square 4,000 m2 square, the background has a sun image simulating the surface of Dong Son bronze drum. The two sides of the square have 9 6 m high stone pillars, representing 18 Hung kings.

The memorial temple of Hung Kings, the largest in the South, features modern architecture combining with national traditions. The main shrine of the temple in the ceremony courtyard is the place to worship the Fatherland Hung Vuong, Father Lac Long Quan, Mother Au Co, Dat and Nuoc. The two sides are 8 pavilions to worship Lac Hau, Lac General, Lac Dan, Tan Vien Son Thanh, Phu Dong Thien Vuong, An Duong Vuong, Trung Nu Vuong … The two sides of the temple are a series of corridors displaying steles with 33 blocks of stone. right to the Spratly Islands. Around the temple are pictures and motifs of the Hung Vuong period. 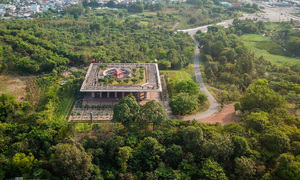 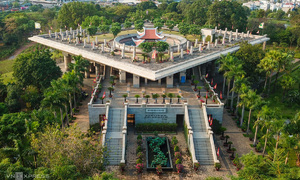 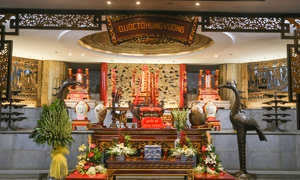 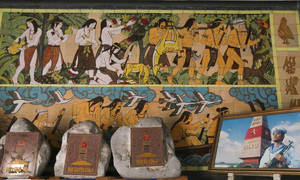 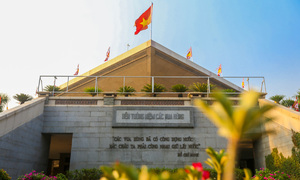 Arriving at Alley 22/93, Tran Binh Trong Street, Ward 1, District 5 on the first day of the third lunar month, from a distance, visitors can pray for the national peace of the people in the area. About 10 houses away from the beginning of the alley is the Temple of the National Father Hung Vuong, which is painted in prominent gold. The temple does not have a gate or fence, the entrance is close to the alley.

Mr. Dinh The Ut, member of Hung Vuong family’s family, said that this temple was a people-founded temple, built before 1970. Before being embellished as a place of worship, this place was home. the residence of the couple Tran Van Cay and Bui Thi Qui. Before their death, their grandparents made a donation paper to donate the house to the Lac Thien Tuong Association, which was later upgraded and repaired as a place to worship Hung Vuong Fatherland. 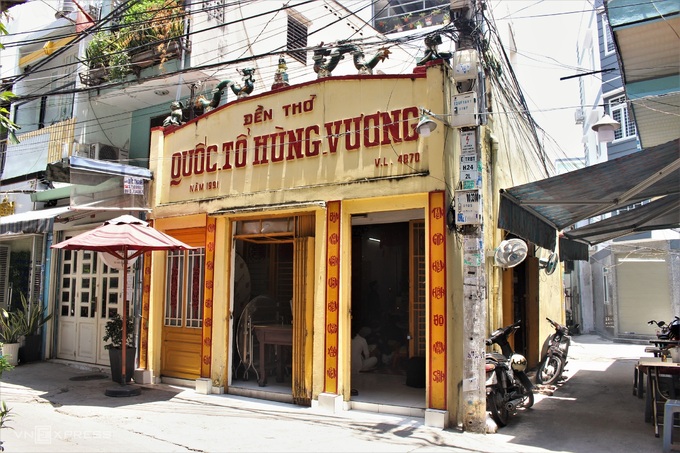 The temple has been embellished as a place to worship Hung Vuong Quoc Quoc Temple since 1991 up to now. The area of ​​worship is about 50 m2. Photo: Huynh Nhi

Step inside, the place of worship stands out with the altar of the homeland with the suspicious statue of King Hung in the middle, the two sides are Lac Hau and Lac General. Above the statue is the plaque of the great ancestor of the great religion, Hung Vuong the Vietnamese father. Right at the entrance is the post of Hung Dao Dai Vuong Tran Quoc Tuan. In addition, the temple also worships the mother of the mother Au Co, Princess Tien Dung, wife Chu Dong Tu, princess Ngoc Hoa, wife Tan Vien.

In the temple, there is a large oil painting of the historical relic of Hung Temple in Co Tich village, Hy Cuong commune, Viet Tri city, Phu Tho province. Next to it is a red handwritten script on the Vietnamese ethnic origin and many non-sentence panels evoking the tradition of drinking water, remembering the source of our people.

In addition to big holidays like Hung Vuong’s death anniversary, the temple also organizes other holidays for people to visit for peace such as the first day of the month and the full moon of the lunar calendar, the anniversary of Quang Trung, the feast of the Holy Mother. Thuong Ngan, Hai Ba Trung’s celebration … attracts many people to attend at noon from 11 am.

A meeting at the beginning of the lunar month to pray for peace at the temple. Video: Huynh Nhi