AN GIANG – Although he is 94 years old, every day, Mr. Tran Van Hon still collects herbal medicine, dries it, and gives it to charity clinics throughout the western provinces.

Early in the morning, Mr. Hon woke up, put his sandals on, and walked out into the yard, walking with his hands on his knees, which were aching from arthritis. He held the spurs into a large bundle and hugged him and used a knife to cut them short until early sunlight spread evenly across the small yard.

“So old, my knee joints often hurt, but it hurts when I walk. If I just sit in one place to cut medicine, I can sit all day,” said the 94-year-old man. On the side of a small house in Tan Phu Hamlet, My Quy ward, Long Xuyen city, dozens of packs of cigarettes were dried, neatly arranged. For more than 40 years, his house has been the gathering point of medicinal plants brought by groups of pickers or people for preliminary treatment before donating to charity oriental medicine clinics inside and outside the province. 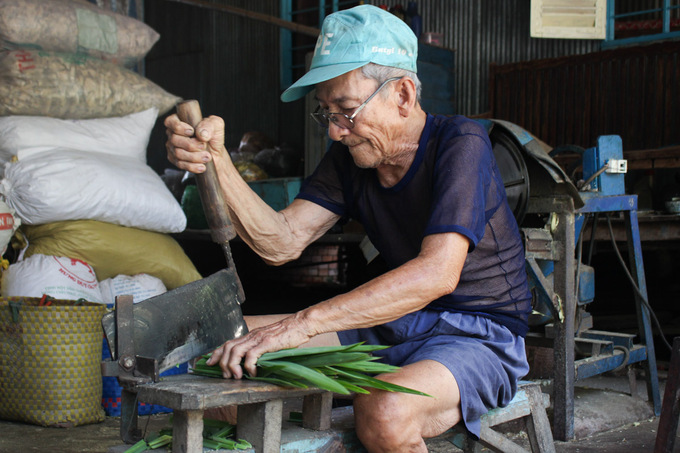 Mr. Tran Van Qua, 56 years old, squeezed an old bicycle on it, hung a bag of fresh noni fruit and a bag of dried orange peels, stopped in front of the alley and called to call Mr. Hon’s house. Having no time to follow groups to remote areas to find medicinal plants, Mr. Qua can only contribute a few herbal remedies available in his garden.

“Everyone’s family has any medicinal plants, they all bring them to ask me to cut and dry. Now I can’t find them myself, but more and more people know and bring them. Thanks to that, there is always medicine in the house,” he said. Explained happily and limped out the alley “receive gifts”.

Mr. Hon was formerly a farmer and also a skilled carpenter in the village. Nearly 50 years ago, his wife suddenly fell ill and passed away. After his wife’s death, while riding a bicycle in Long Xuyen city, he saw an oriental medicine clinic specializing in taking pulse, giving free medicine to the poor. Visiting and inquiring, Mr. Hon learned that most of the herbs here were found and donated by local people.

At that time, Mr. Hon thought: “If I had known this clinic earlier, my wife would not have died so soon. I am not a physician, cannot take the pulse of examination but are healthy, just spend a little time looking for them. Such medicinal plants help the poor “. From that day on, Mr. Hon started to question the healers at the clinic, listen to their instructions and find popular and easy-to-find medicinal herbs in the village gardens. Finding what kind, he brought home, chopped, dried, packed carefully and brought to present immediately.

Even though he had to raise four children alone, when he saved a small amount of money, the man gathered about a dozen of his friends to bury rice in the mountains, set up camps, and radiated precious medicinal plants. At that time, in front of the house was still a dirt yard, to keep the hygiene, Mr. Hon had to use fish nets lined below to dry medicine. When the father went to work, the children were assigned to stay at home to dry medicine and watch the rain.

Mr. Tran Van Son, 62 years old, son of Hon Hon said: “Father told us to watch the medicine very carefully. When it rains, three or four brothers gather their nets and run into the house, waiting to stop and bring them to dry again. many days had to run out and run three or four times like that “.

Herbalist Duong Van Nang at the Nine Nang Charity Clinic, An Bien District, Kien Giang, shared: “My clinic has been taking medicinal plants from Hon Hon for three years. Although it is not a provider of medicinal plants. But my medicine is very good quality, dried and clean. Every month, my place usually takes about 2 tons of dried medicinal plants of all kinds “.

Mr. Tran Tu Hai, Chairman of the Traditional Medicine Association of My Quy Ward, Long Xuyen City, said: “Grandfather Hon is the oldest and also the oldest person in the locality, working as a collection of medicinal herbs donated. Charity clinic. Previously, there were many people working on it, but now only Hon is still attached “. 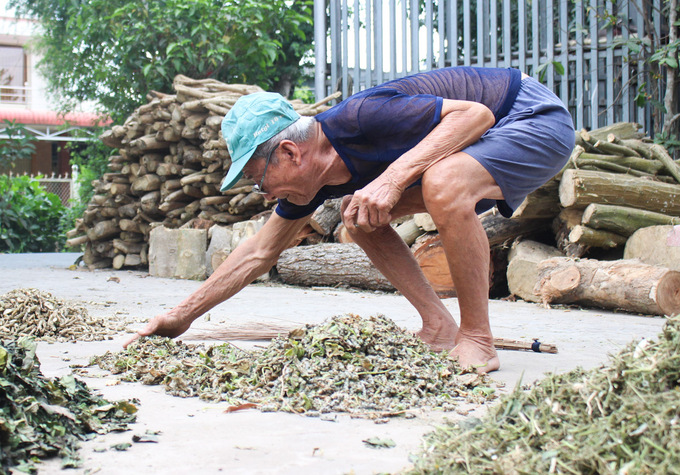 In the afternoon of late March, when there were more than a dozen medicinal herbs on the field, it started to rain. Mr. Hon called his son and a few neighbors to help him collect the medicine. His feet tried to walk quickly, his broomsticks decisively, hurriedly as the rain began to fall. Finished, he tossed the broom aside, sat on the ground floor gasped, took some tincture from the bottle to massage the knees.

“I just wish I had good health. I have had difficulty walking for several years, but without me, my children will surely follow me,” he said, turning his eyes to the son who was writing the names of drugs on the outside. sacks, then laugh. Follow vnexpress