Located in Dong Hoa District, Phu Yen Province, Da Bia Mountain is one of the highest mountains of the Ca Pass and it takes about two hours of climbing to reach the top. 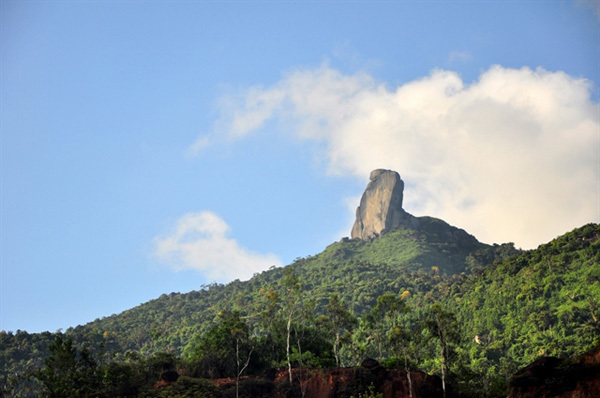 Da Bia Mountain is one of the highest mountains of the Ca Pass range in Phu Yen Province. — Photo foox.vn

Da Bia Mountain is 706m high, majestically standing in the north of the Ca Pass. On the top of the mountain is a strangely shaped giant rock with a height of 76m.

The mountain's ecosystem features the typical flora and fauna species of the tropical forest.

The mountain is closely linked to many legends. In 1471, when King Le Thanh Tong was on his way to reclaim some land to the south, the king carved letters (the meaning of which are disputed) in a big stone block at the top of the mountain. From that time, the mountain was called Da Bia (Stone Stele).

In 1836, King Minh Mang had artisans engrave an image of Da Bia Mountain on one of nine censers placed at The To Mieu (Temple of the Generations) in Hue Citadel.

That to its history, terrain and special ecosystem, Da Bia Mountain was recognised as a national scenic heritage in 2008. 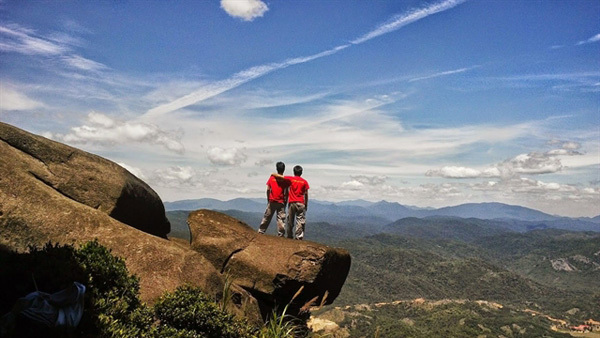 Da Bia Mountain is also called Lingaparvata (it means Linga – the mountain god who was the embodiment of Siva God in the belief of ethnic Cham people) or Cui Bap and Ong Bia.

The mountain has also the name of Ngon Tay Chua (Finger of God), which is what the French called the mountain at the end of the 19th century because looking at Ca Pass from the sea, Da Bia Mountain is like a finger pointing to the sky.

Exploring the beauty of Da Bia

From Tuy Hoa City, we drove our car along Highway 1A about 27km to reach Ca Pass.

We had heard that the way to the top was just more than 2.5km, so we thought it would be an easy walk, but we were wrong. This was the only route with stairs but it was steep. 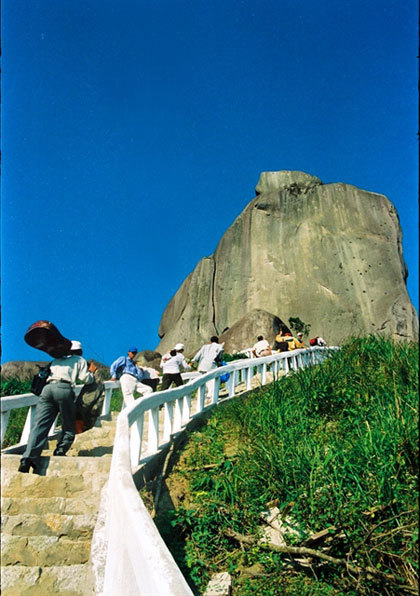 We climbed a few hundred metres before we had to stop and catch our breath while admiring the beautiful view.

The higher we climbed, the cooler the climate was, but everyone was sweaty because of the climb. The trees on either side of the path are mostly bamboo.

We saw many strange flowers and mushrooms which were very beautiful but no one knew their names. The closer we got to the peak the more mesmerising the view was on the beautiful sunny day.

The hardest part of the climb was the end. There were only a few hundred steps with handrails but it was so steep we had to stop several times before reaching the top.

The peak of Da Bia was filled with the colours of picnics and full of victorious smiles.

It felt like we could see all of Phu Yen in front of us, with an unending, relaxing blue colour.

The blue of the sky, the lush green of the trees, the mellow and tender blue of the ocean, all combined to form a wonderful view. 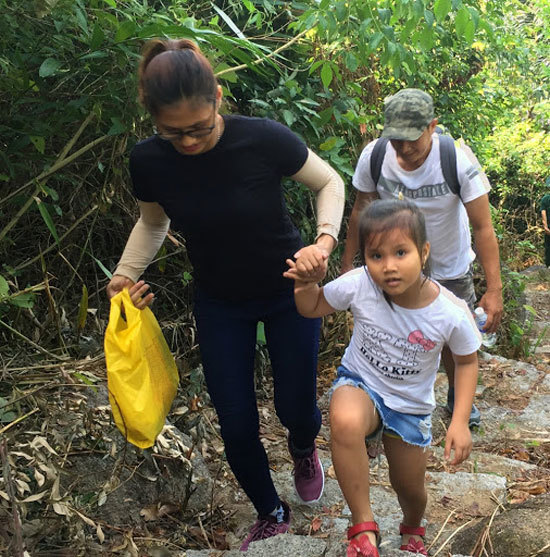 A special feature of the top of Da Bia Mountain was that from different angles we could see that it has different shapes. For example, looking from the top of the mountain, it looks like a majestic lion; viewed from Bai Xep Beach, it looks like a figure sitting; from the side of Hoa Tam School, it has the figure of the Buddha sitting. The mountain peak is covered by layers of white clouds all year round.