Thai Binh is known as a land of land and spirits under the Tran dynasty, this is the fact that more than 700 years ago, a complex of tombs of Tran kings was formed with the name Tran Thai Binh Temple.

For many countries, especially Asian countries, spiritual culture always has great significance, inexplicable things are considered spiritual phenomena. This has turned many countries into world famous spiritual destinations. In Vietnam, there are many different temples and temples, in these locations all worship a saint, a god or people who have made merit to the nation. When visiting Thai Binh cultural sites, you will hear an extremely famous spiritual tourist destination that is Tran Thai Binh Temple. So what is special about this temple that makes many tourists want to visit? 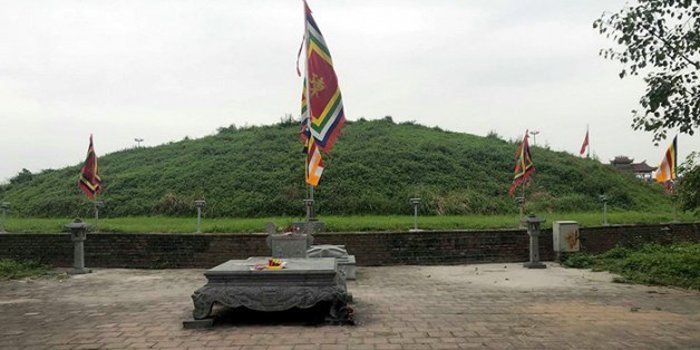 History of the Temple

To create a free and independent Vietnam today, we have spent more than 4000 years building and defending the country, many feudal dynasties formed and collapsed, witnessed many invasions by Northern powers, Western imperialists. Among the feudal dynasties in our country, the era of Tran kings is considered the most flourishing period of development.

Tran Thai Binh Templelocated in Tam Thuong village, Tien Duc commune, Hung Ha district, Thai Binh province. More than 700 years ago this was where the Tran kings were born and built their careers. Under the reign of kings, Dai Viet repeatedly smashed the invasions, especially the ones that defeated the aggressive Nguyen-Mongol army. This place is many times the place where the great ancestors and important celebrations take place. Tran Dynasty built many systems of temples and pagodas with the purpose of worshiping people with meritorious services to the court. Among the famous temples like Tran Nam Dinh temple, Tran Thai Binh temple is the burial place of the body of many people. Many eminent kings of the Tran Dynasty such as Thuy To Tran Kinh, Thai To Tran Khoi, Nguyen To Tran Ly, Thai Thuong Hoang Tran Thua, this is also the eternal resting place of early Tran kings: Tran Thai Tong. , Tran Thanh Tong, Tran Nhan Tong….Tran Thai Binh Temple is a place where natural and human beings blend into one. Over 700 years of existence, despite being destroyed by war bombs and temples that still exist today, the people of the country every year always flock here to burn incense to worship the heroes of the nation.

Tran Thai Binh Temple is also known by another name that is the tomb area of ​​Tran kings. The temple has an area of ​​5,175 square meters, divided into many meticulous and sophisticated works such as the harem, the altar, the left, the right, the temple, the golden radio, the three tombs of the Tran kings and many works. Unique architecture related. When you visit this place you will be overwhelmed by almost all of the architecture here is preserved as before, each brick is hundreds of years old. You can see that even though it was made hundreds of years ago, the kings were very good and creative when they built the magnificent and very regal complex of temples and mausoleums today. 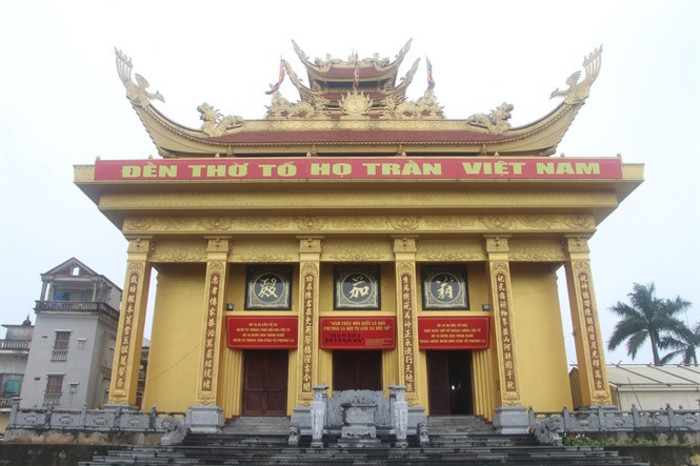 To worship Tran family in Vietnam
> See also:  The most attractive summer tour 2019

In the Hau Cung court is the place to worship the ancestors of the Tran dynasty such as Thuy To, Thai To, Nguyen To, Thai Emperor …. Besides, in front of the temple area of ​​Tran kings, there are 3 large tombs that have been renovated and died. That is the final resting place of the three kings of the Tran Dynasty, Tran Thai Tong, Tran Thanh Tong and Tran Nhan Tong. , 3 first is like 3 mountains located in the field of Tam Duong village.

Besides, many ancient works have clearly shown the unique cultural features of Dai Viet country under the ceiling dynasty, each motif, sculpting on the walls or the tomb has its own characteristics, but the same identity with the purpose of inheriting and promoting the traditional architecture of the nation – village communal architecture. To build a complex like today, Tran Thai Binh Temple is not only an ordinary spiritual tourist destination, but also a witness of history, a long-standing cultural value that we need. protect and preserve forever.

When should you visit Tran Thai Binh Temple?

To inherit and commemorate the merits of Tran kings, every year at Tran Thai Binh Temple, there will be a solemn festival lasting from January 13 to 18 of the lunar calendar. The main and most important part of the festival is the opening ceremony, along with the festival, which recreates many typical folk games of the Tran dynasty such as procession, fish competition, martial arts, kite flying. …. and to promote and preserve long-standing cultural values, in 2014 Tran Thai Binh Temple Festival was recognized by the State as a national intangible cultural heritage. 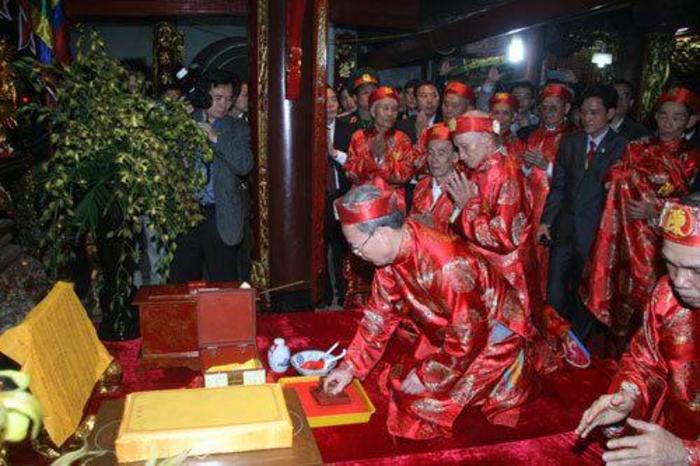 Today’s Tran Thai Binh Temple is not merely a tourist destination, it is also the historical value of the Vietnamese people, demonstrating and promoting the nation’s long-standing tradition of drinking water.

Thai Binh is the land to develop karma, keep karma, and manic karma of the Tran dynasty. The Tran chose Tam Duong, now belonging to Tien Duc commune, Hung Ha district, Thai Binh province, to be the shrine to set up mausoleums for imperial kings. Currently, there are three large graves here, which are said to be the graves of the first three kings of the Tran dynasty, recognized by the Ministry of Culture, Sports and Tourism and recognized as a special national historic site. 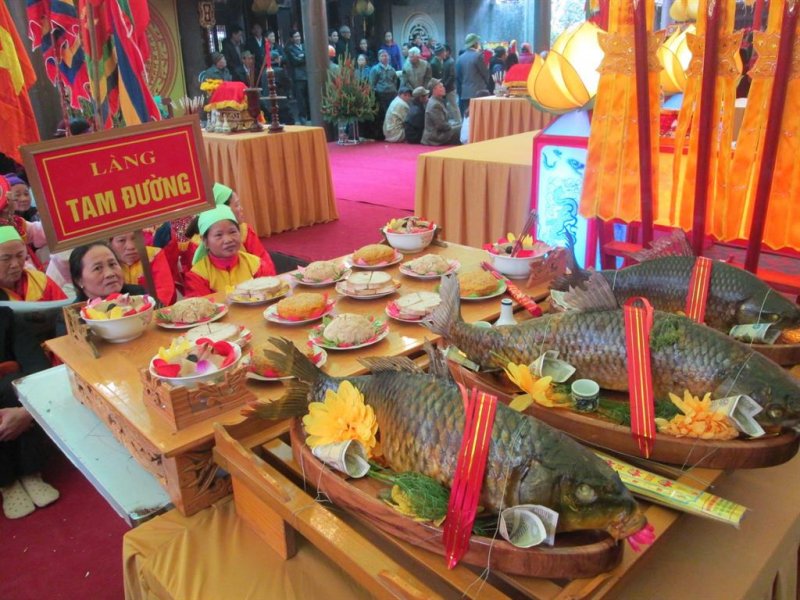 Since ancient times, people in Tam Duong village and around the area have often held festivals to commemorate the Tran kings. The Tran Temple Festival consists of two parts: the ceremony part and the festival part. During the ceremony and offering incense, it is always clear why the Tran kings chose Tam Duong and Tien Duc to build the tombs of Tran kings. At this place, from King Thai Tong and King Nghe Tong came to celebrate the victory of defeating foreign invaders. The festival reappears many folk games associated with agriculture, associated with the transmission of snow about the ancestors of the Tran such as the water procession, the Moc Duc ceremony (the statue bathing ceremony) and the competitions: the duck catching contest, catch fish; fish deck competition; Contest package banh chung in which the fish contest attracts many tourists. 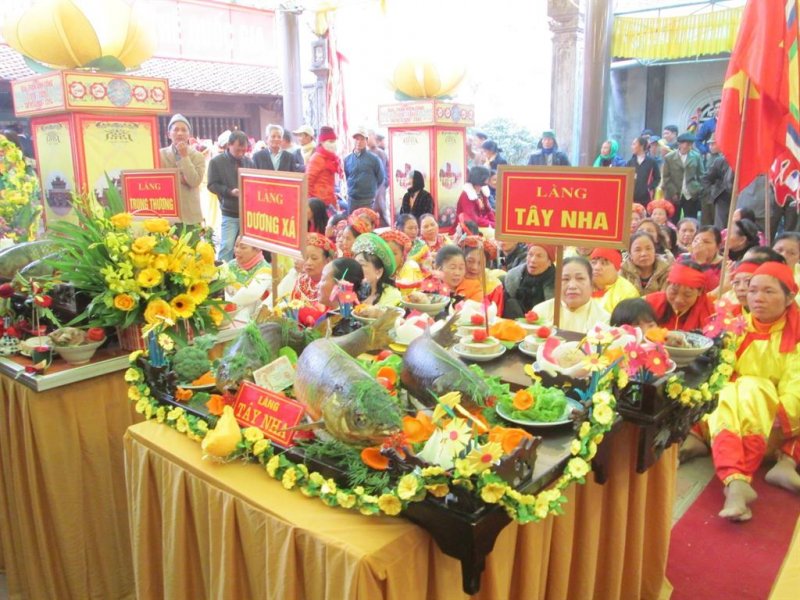 Tam Duong village in the past was divided according to the armor, the fish deck contest was held between the borders. The fish-deck exam is meant to commemorate the ancestors of the Tran family, who worked in fishing and fishing. Also because of the attachment to rivers, Tran ancestors often matched their names with the name of a fish such as Tran Kinh which means Kinh fish, Tran Khoi means carp, Tran Ly: Carp, Tran Thua: Catfish, Tran Thi Dung: Tuna.

The fish brought to the contest are big black carp, one-gang width, three-gang length or more. The fish is boiled until it is ripe enough, then use the fat soaked in the fish body to pass the fire, smell fragrant, the fish meat is no longer pink, the fish should not be scaly, the fins are curled, the fins are straight along the fish body.

According to the plan, in 2021 the Tran Temple Festival will be held on a provincial scale, but before the complicated development of the Covid epidemic – 19, the People’s Committee of Thai Binh province decided to stop organizing the Tran Temple Festival in early spring (evening of 13 calendars) at the National Monument Special Shrine and Tomb of Tran Kings.