Cruise tourism Ban Gioc Waterfall takes you to the marvels of nature between land and sky Cao Bang. Every weekend, visitors go to Ban Gioc Waterfall Tour ‘relieve stress’, away from the bustling town. So what’s Ban Gioc waterfall beautiful? What to visit around the waterfall? Any other fun activities coming here? Join us through this article offline! 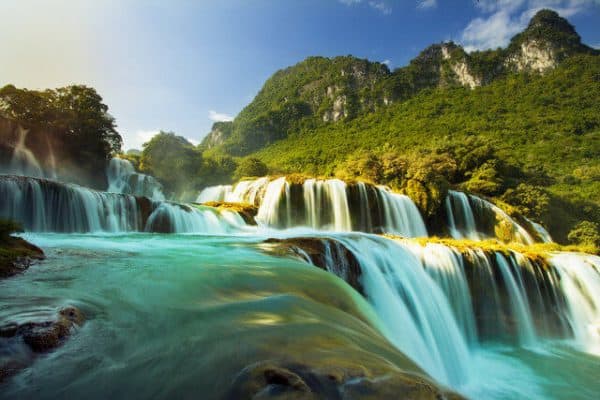 Ban Gioc waterfall is located about 90km from Cao Bang city and 400km from the center of Hanoi capital, in Dam Thuy commune, Trung Khanh district. Starting from Cao Bang city, you can go in the direction of Tra Linh – Tong Co to Gioc village. For those who love to travel can choose the road through Ma Phuc pass because the mountain scenery on the way is very beautiful and attractive.

Which season is the most beautiful to go to Ban Gioc waterfall?

The climate at Ban Gioc Cao Bang waterfall is divided into two distinct seasons: rainy season and dry season. The rainy season starts from June to September. This is also the time when the waterfall is pouring water, pouring white foam, very suitable for trips to Ban Gioc waterfall, especially in the period of August – September. . 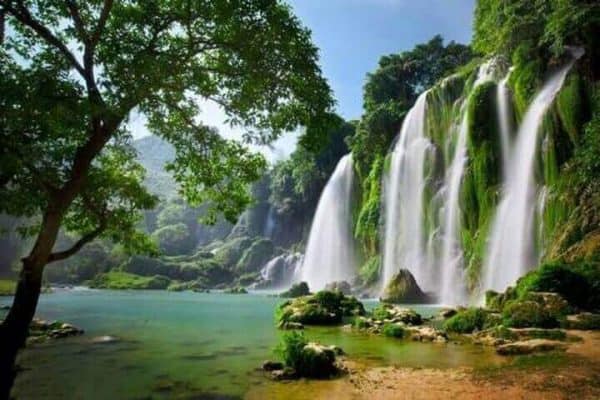 The waterfall in the dry season brings a completely different nuance. At this time, Ban Gioc Cao Bang waterfall is quite peaceful, the golden rice fields at the foot of the waterfall create a romantic scene, but also very peaceful. 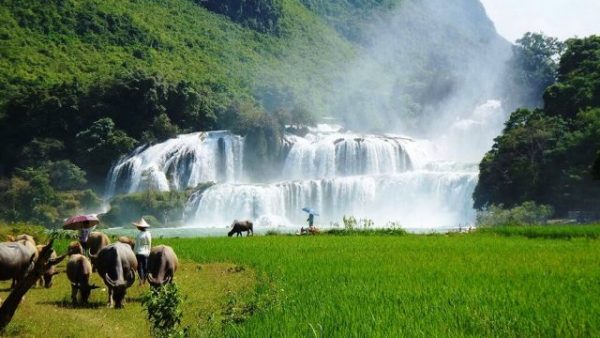 How to go to Ban Gioc waterfall?

You can go to Ban Gioc waterfall by car, bus, bus or motorbike. 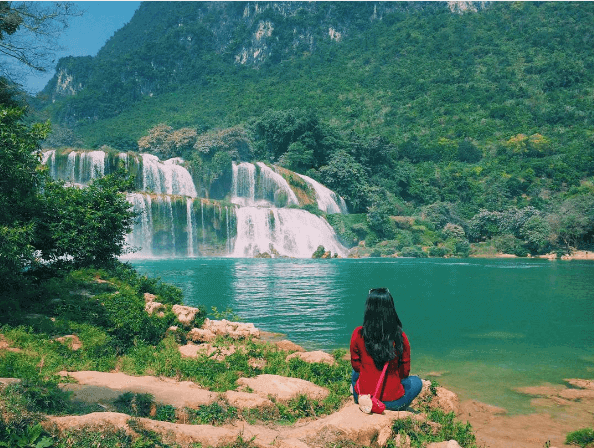 Which hotel to stay at Ban Gioc waterfall?

In Ban Gioc Cao Bang, you can easily find cheap motels from only 250k / night. In addition, in Chongqing or Cao Bang province, there are also some motels you can refer to such as: 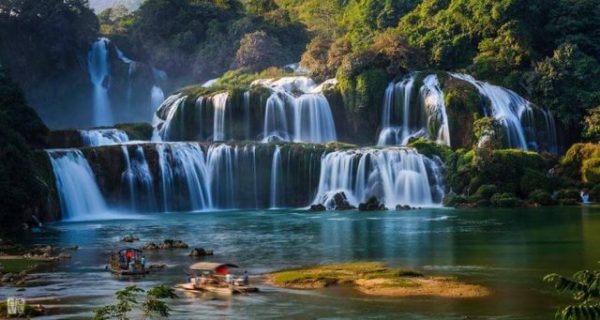 The places to visit at Ban Gioc waterfall 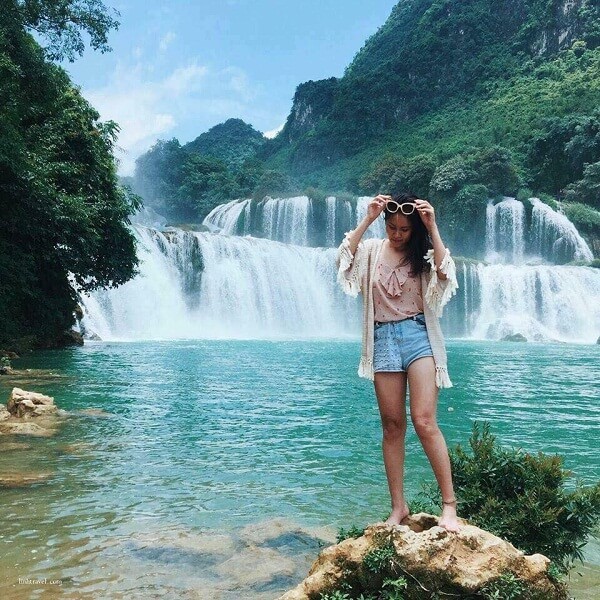 As a rock cave located in a large mountain range, Pac Po cave used to be the place where Uncle had revolutionary activities. In front of the cave, there is a small, clear stream, sometimes printed in blue sky, and is named Lenin stream by Uncle Ho. 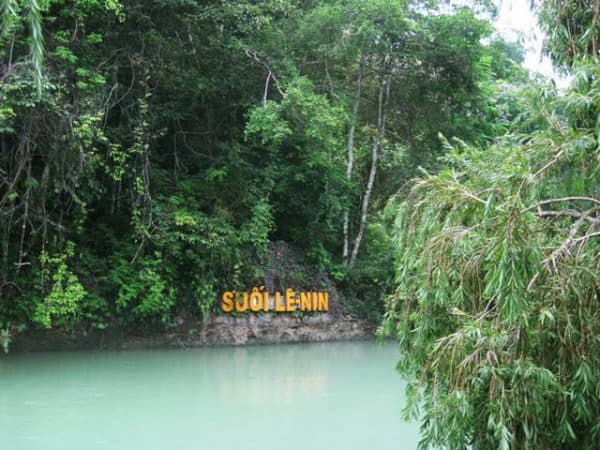 About 3km away from Ban Gioc waterfall, located in the heart of a mountain in Ca Bang, with a total length of up to 2144m with 3 main gates: Nguom Ngao, Nguom Lom, and Ban Thuon. 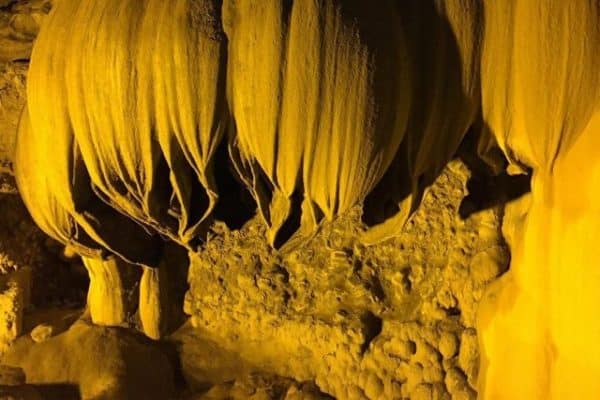 Thang Hen Lake is a freshwater lake in Quoc Toan commune, Tra Linh district, Cao Bang province. This is a tourist destination in Cao Bang that attracts tourists not only because of the beautiful landscape but also known for the folk legends associated with it. 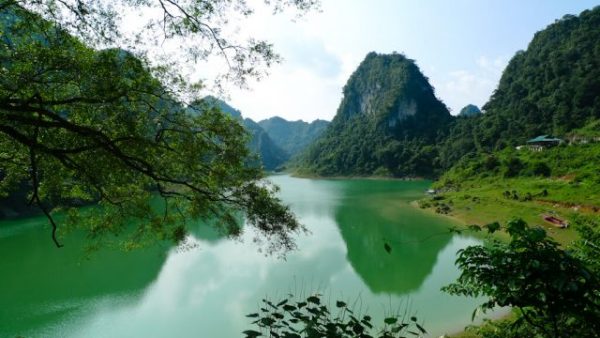 See also:  Cao Bang Travel do not forget to enjoy the top 10 famous and delicious specialties 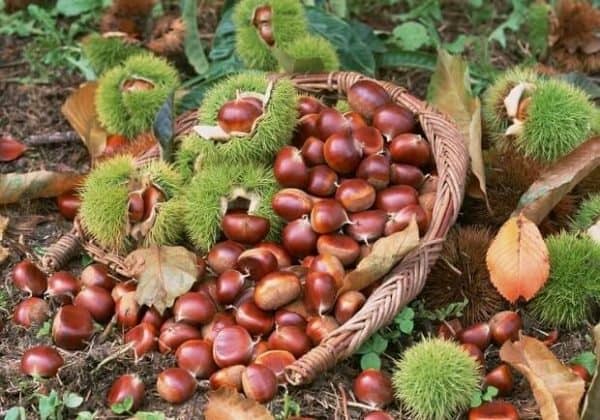 Hopefully, the above sharing about the Ban Gioc Cao Bang waterfall experience will be useful luggage for your journey of discovery and experience.