Street carrying poles have been one of the typical images of Hanoi, embellishing its beauty.

Visiting Hanoi, tourists not only shoot pictures of famous sites but also woman street vendors. The women carrying twin baskets suspended from shoulder poles have been an icon of Hanoi’s culture and represented the diligence of Vietnamese female. 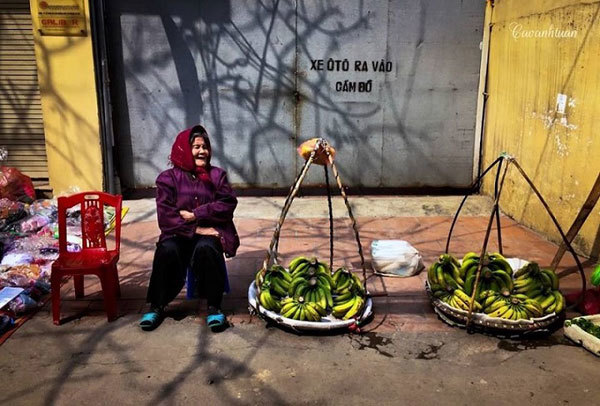 On the street, in small alleys, it is easy to catch street vendors walking around with heavy loads. Most of them come from the city’s suburban areas or other provinces, who carry not only goods but also the livelihood of a family on their small shoulders. They are hardworking mothers who tenaciously toil for their own living and support their children.

No one knows exactly when the first shoulder-pole vendor migrated from the countryside to cities but they have been here and there with the ups and downs of Hanoi for centuries, according to cultural researchers.

In the old time, the vendor used a pair of shoulder poles to move easily in small alleys and thereby were called carrying-pole vendors. 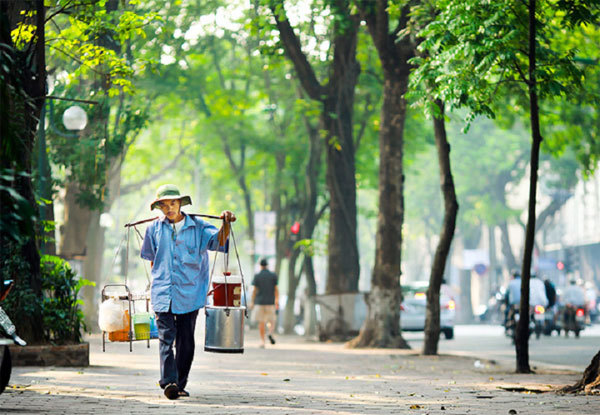 Today, many vendors use bicycles instead of shoulder poles. But both means have the same “traditional” name and feature a typical charm of the city.  Shoulder poles also show a typical culture of people in the capital city.

For centuries, they have had the habit of buying food from street vendors, especially snack dishes. Just walking out the door or even sitting inside the house, they could still buy just anything for a family meal by waving their hands to a passing-by street vendor.

It is also their own way of enjoying food. There is a variety of food offered in carrying poles such as cakes, sticky rice, different kinds of noodles, sweet desserts, com (green sticky rice), boiled or grilled sweet potato and corn, and so on. Female vendors carry not only goods but also the livelihood of a family on their small shoulders. Photo: Yeu Ha Noi

All of them are simple but they are the typical dishes as well as the culinary style of the place. Besides food, other stuffs are also found in their baskets like vegetables and roots, flowers, fruit. All are well arranged in their loads or baskets to be easily carried to many places.

Only about two decades ago, the announcement of these street vendors for the stuffs they sold resounded from the morning to the evening, like a special concert of life such as “Who wants hot and crispy banh mi (Vietnamese bread) or “Who wants tao pho (tofu pudding with ginger syrup)?”

Today, although street vendors still walking on Hanoi’s streets, some dishes are no longer offered and their loud announcement no longer echoed on small alleys, leaving many city dwellers with nostalgia. Amidst the hustle and bustle of Hanoi capital, the street vendors are walking day by day, quietly fulfilling their dreams of a better life. Photo: VOV

The carrying pole of street vendors has been the inspiration for generations of Hanoi writers, poets and artists, especially when writing about Hanoi. In his book called “Hanoi- thirty- six streets”, writer Thach Lam reserved a voluminous space telling story about street vendors in Hanoi.

Vu Bang, another writer, known for his writings about Hanoi food, also affirmed the value of street vendors to Hanoi’s culture. Today, in the hasty urbanization, there have been more and more buildings and skyscrapers in Hanoi erected, housing fanciful restaurants inside.

The development of technology in the 4.0 era with delivery applications also challenges the work of these street vendors. However, they are still walking day by day, quietly fulfilling their dreams of a life better than the one they left behind in the home village.