Visitors to the capital have the opportunity to learn about the history – the culture of the nation at Van Mieu – Quoc Tu Giam, Hoang Thanh Thang Long …

For those who love to travel, like to learn about history – culture, you should not miss the 5 relics below.

Temple of Literature – Quoc Tu Giam is one of the most famous destinations in Hanoi that any visitor should not miss. The architectural complex here includes: Van Lake, Van Mieu – Quoc Tu Giam area and Giam garden. In which, the subject architecture is Van Mieu (the place of worshiping Confucius) and Quoc Tu Giam. With more than 700 years of operation, having trained thousands of talents for the country, Quoc Tu Giam is considered as the first university in Vietnam and also a symbol of feudal electoralism.

This used to be the place where thousands of martyrs come to “good luck” before each exam by stroking turtle heads at doctoral steles. However, at present, to preserve the monument, a fence is set up and the martyrs no longer do the ritual of luck as before. Instead, at the beginning of the lunar year, many students and their families will come here to burn incense and ask Mr. Do to pray for passing exams, a prosperous and prosperous new year. 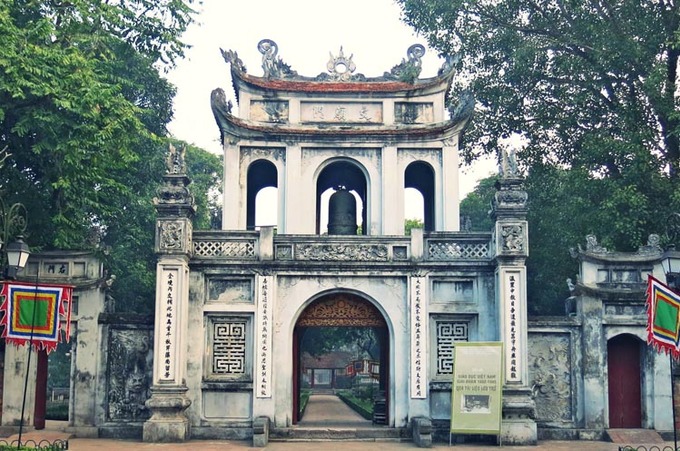 Hoang Thanh Thang Long is the next famous historical relic of Thang Long citadel, starting from the pre-Thang Long period (7th century) through the Dinh – Tien Le period, and was strongly developed under the Ly and Tran dynasties. , Le and Hanoi citadel under the Nguyen Dynasty. This is a massive architectural work, built by dynasties in many historical periods and becomes the most important relic in the system of monuments of Vietnam. Hoang Thanh Thang Long has been recognized by UNESCO as a cultural heritage of the world.

Opening hours: From 8am to 5pm daily (except Monday).

– Adults: 30,000 VND / time
– Pupils and students aged 15 years and over (if they have a student’s card), the elderly (60 years old or older) are Vietnamese citizens (present ID or any other documents proving to be elderly): 15,000 VND / time.
– Free sightseeing for children under 15 years old and people with meritorious services to the revolution. Hoan Kiem Lake was formerly known as Luc Thuy Lake or Thuy Quan Lake. Because this used to be the place where the king used to train marines to fight. However, in the 15th century, the lake was renamed Hoan Kiem Lake because it was associated with the legend of King Le Loi returning a treasure sword to the Golden Turtle. The lake is located in the center of the capital, surrounded by 3 streets: Hang Khay, Le Thai To and Dinh Tien Hoang.

Currently, Hoan Kiem Lake is a place for people to relax, take a walk, get cool and a place for cultural activities. This is also a favorite place for young people every weekend when the walking street takes place (from Friday to Sunday every week).

Ngoc Son Temple is also considered a symbol in Hanoi. The temple was built in the early 19th century, originally known as Ngoc Son pagoda, later changed to Ngoc Son temple because in the temple of the literary god, the election was Van Xuong De Quan and worshiped the hero who made great efforts. The Nguyen army in the 13th century was Hung Dao Dai Vuong Tran Quoc Tuan. 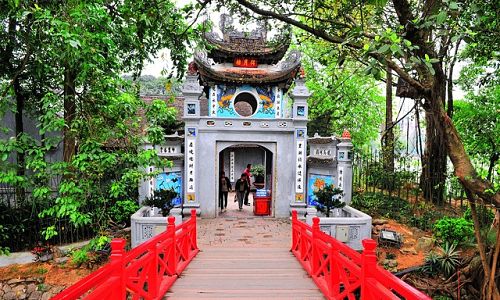 Ngoc Son Temple stands out with the works and architecture around including: Tower But, Dai Nghien, The Huc Bridge, Dac Nguyet Lau, Temple and Ba Dinh Tran.

Ho Chi Minh Mausoleum (or President Ho Chi Minh Mausoleum, Uncle Ho’s Mausoleum) is the place to keep Ho Chi Minh’s body. The mausoleum was officially started on September 2, 1973 and was inaugurated on August 29, 1975, at the location of the old monument between Ba Dinh Square, where Uncle Ho used to preside over the meetings.

Uncle Ho’s mausoleum is located in the mausoleum complex including Ba Dinh Square, the Presidential Palace, the Uncle Ho’s stilt house … Normally, visitors will be able to visit the whole area in the order: Uncle Ho’s Mausoleum to the Stilt House, Uncle Ho’s fish pond Ho, then visited Ho Chi Minh Museum and finally One Pillar Pagoda. Besides, when coming here, visitors can also admire the flag raising ceremony and lowering the flag at Ba Dinh Square. 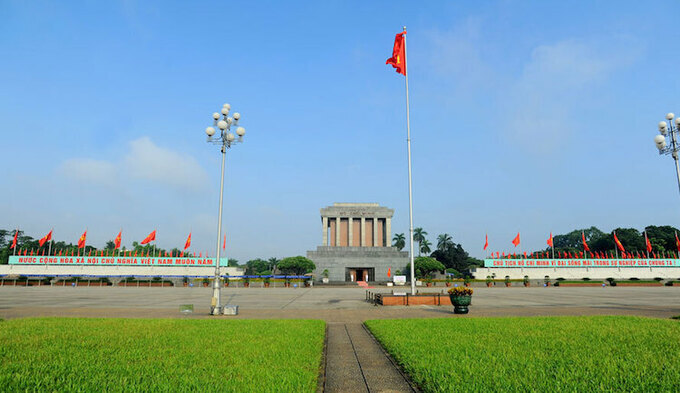 Uncle Ho’s mausoleum is usually open in the mornings of the week except Mondays and Fridays. However, on special days such as the first day of Lunar New Year, May 19 (Uncle Ho’s birthday) and September 2 (National Day) that coincide on Monday or Friday, the mausoleum will still be open.

– Free for Vietnamese citizens.
– The entrance ticket price of the Chairman’s mausoleum with foreign tourists is VND 25,000 / time, and VND 25,000 ticket to visit the Uncle Ho house on stilts. Follow vnexpress