Visitors to the northern province of Dien Bien are sure to be impressed by the colourful traditional outfits of the Xa Phang ethnic minority, in particular their sophisticatedly embroidered shoes. 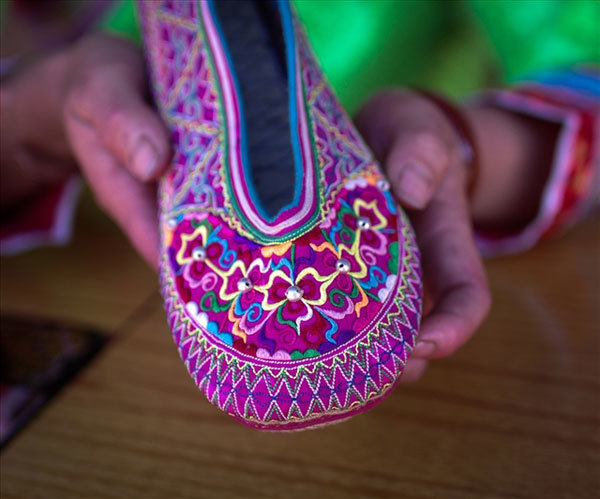 The Xa Phang now have even more reason to be proud of their footwear, as their traditional craft of embroidered shoes was recently recognised as a national intangible cultural heritage by the Ministry of Culture, Sports and Tourism. 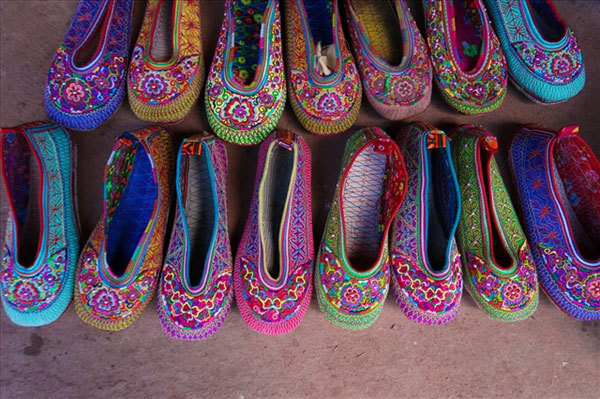 In Dien Bien Province, they live in 10 villages in six communes within Muong Cha, Nam Po, Muong Nhe, and Tua Chua districts, and have a population of more than 2,000.

In Ta Sin Thang in Tua Chua District, the whole area is now filled with blooming orchids and visitors can readily catch sight of Xa Phang women sewing costumes and making shoes out the front of their homes. 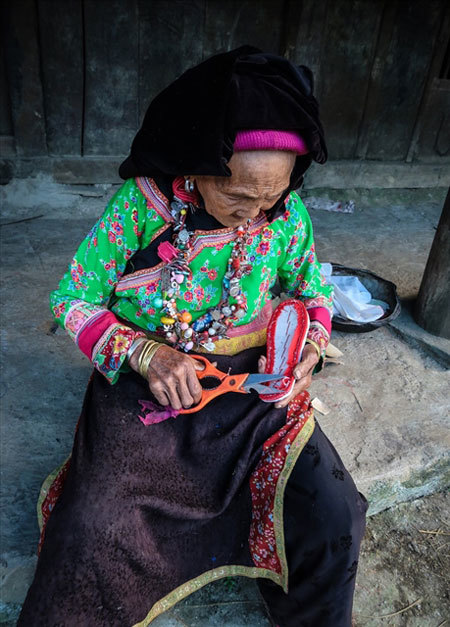 The artisanal shoes of the Xa Phang people may look simple, but a closer look reveals just how sophisticated the details of their patterns and embroidery lines are.

Their colourful shoes are a key part of their outfits and are meticulously made. According to elderly artisans making and sewing the soles are the most time-consuming stages and will determine the durability of the shoes. 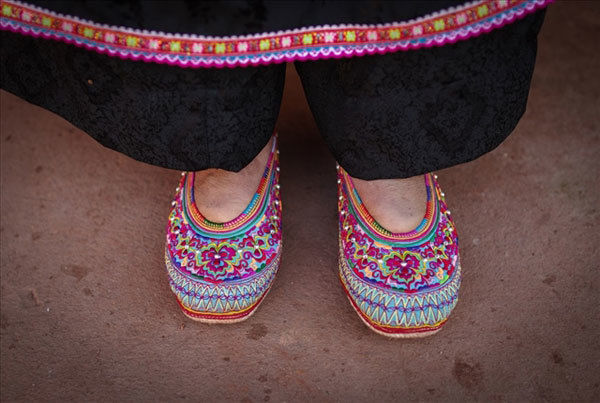 WORN TOGETHER: A pair of embroidered shoes is an indispensable part of the Xa Phang’s traditional outfit. Photo laodong.vn

A unique feature is the materials used as stuffing in the sole: chopped bamboo leaves that have been boiled, pounded, and dried.

The lower side of the sole is made from white linen that has been carefully stitched and pulled tight, while the upper is made from durable, sturdy fabric and covered with a paste made from a herb, which explains why the traditional embroidered shoes of the Xa Phang are quite robust.

“When wearing a new pair for the first time, one may find them a bit stiff due to their tight soles, but will gradually become used to it,” said local man Ngai Leng Pan, adding that everyone in his household has three or four pairs. “They feel comfortable and are easy to walk in because they are completely made from natural materials.”

The unique beauty of the handmade shoes lies in their patterns and colours.

There are many different types in terms of shape, size, style, and colour, and a range of choice for men, women, and the elderly. All have one thing in common, however: unique flowery decorative patterns associated with Xa Phang ethnic cultural life.

The threads used to embroider the shoes are natural and come in a variety of colours, used depending on the taste and aesthetics of the maker but mainly red, pink, blue, or yellow. In particular, shoes for young women are always decorated with bright colours. 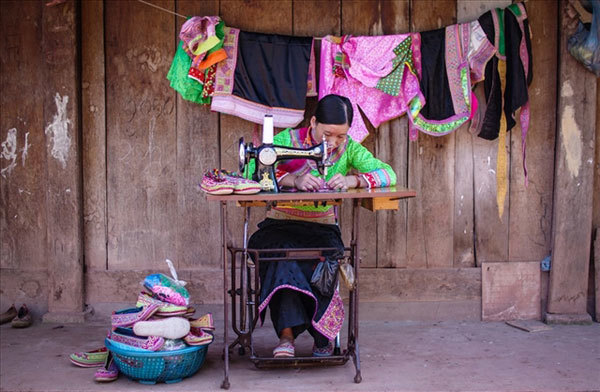 CERTAIN SKILL: Nearly all Xa Phang women are taught how to sew clothes and embroider shoes before marriage. Photo laodong.vn

Hoang Lao Tu from Ta Sin Thang Village was taught how to sew clothes and shoes by her mother when she was 12.

A finished pair takes nearly a month. The shoe-maker must be careful about choosing the materials for soles and sewing everything to the correct size.

“Each pattern embroidered on a shoe must be done skilfully, because their beauty depends on the decorative lines,” she said.

Shoes are mostly made for family members. The Xa Phang people wear their embroidered shoes and traditional outfits on special occasions like festivals and weddings.

According to Lo Trien San, chief of Ta Sin Village, the Xa Phang consider the shoes and outfits as the soul of their life. They have made great efforts to preserve their ancestors’ craft over generations, and almost all Xa Phang women are taught how to sew clothes and embroider shoes before they are married.

“The young generation in my village all learn how to sew and are encouraged to retain our traditional outfits,” he said.

Duong Thanh Son, deputy head of Tua Chua District's Department of Culture and Information, said the Xa Phang community have preserved much of their unique culture, and their traditional outfits and embroidered shoes remain largely unchanged to this day.

“The image of Xa Phang sisters in traditional costume as they go about their daily business or attend festive occasions magnifies their graceful beauty,” Son said.

“Traditional embroidered clothes and shoes are not only for beauty purposes -- they also have cultural and spiritual significance the Xa Phang people hope to convey via each colourful pattern.”

“The responsibility of preserving this national heritage therefore not only lies with the Xa Phang but also with the relevant public agencies and organisations.”

Today, 09:07
Regret all youth if you don’t check in to Ngoc Thuy Hanoi reed grass