Not only the Central land, even in the Great Highlands, there is also an extremely unique and ancient Cham tower, making visitors fall in love.

Introduction to the Cham Tower of Yang Prong

Accordingly, the name “Yang Prong” has many meanings, but according to the Ede people, it is a supreme god specializing in the management of crops, so this is the tower to worship Than Lon of the ancient Cham.

Between 1904 and 1911, historians and archaeologists discovered the tower and through the research process determined that this work was built by the Cham in the 13th century, under King Jaya Sinhavarman III ( Che Man), ie the Tran Dynasty of Dai Viet. 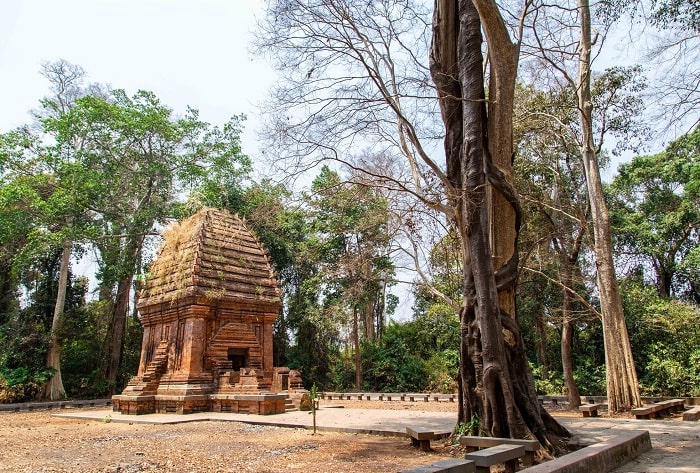 Yang Prong Cham Tower is not only a National-level Cultural Monument of important historical and architectural significance, but also introduced by the French nationalist named Henri Maitre in the book Les Jungles Moi (Moi Moi) year 1912.

Moreover, during the war, the tower was bombed and partially damaged, so in order to restore this only Cham tower in the Central Highlands to become intact as it is today, the government of Dak Lak province had to invest more than 10 billions dong. Therefore, this is a very must-visit tourist spot.

Impressive architecture of the Cham Tower of Yang Prong

Not built on the towering hills, which can be admired from afar, but  the Cham Yang Prong tower is hidden under the green canopy of the old Ea Sup forest, on the gentle Ea H’leo river, so only those who have the heart to reveal the great curtain can see it. 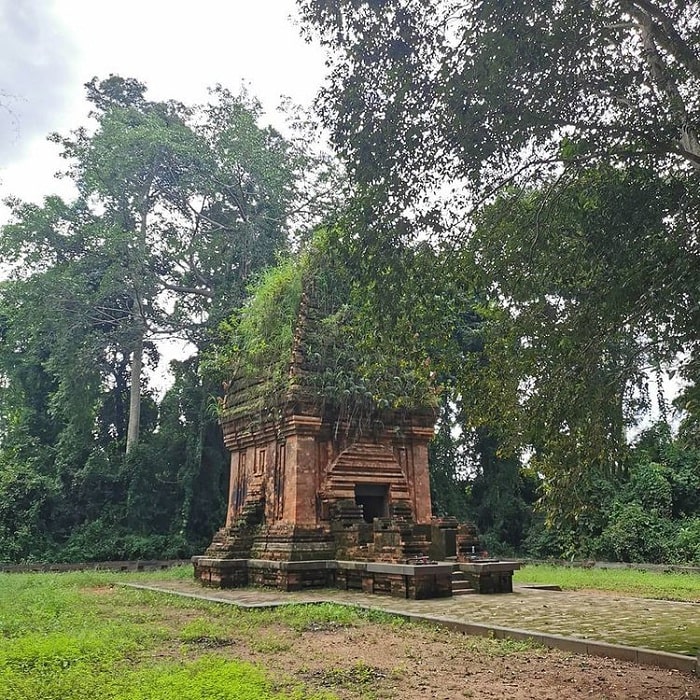 The tower is under the shady trees (Photo @ricky_hoang)

In addition, around the tower, there are immense greenery of tropical forests, with liana flora, lichen plants and a glimpse of colorful orchid baskets, and charming purple colors of the canopy by the tomb, creating a strange romantic space.

Like many other Cham towers , Rung Xanh Cham tower does not have a massive architecture, only about 9m high, the bottom is designed in a square shape with each side of 5m long, each wall face west – south – north is 3 fake doors. The only one in the East has a real door 1m wide to go in and add a 1.6m wide foyer. 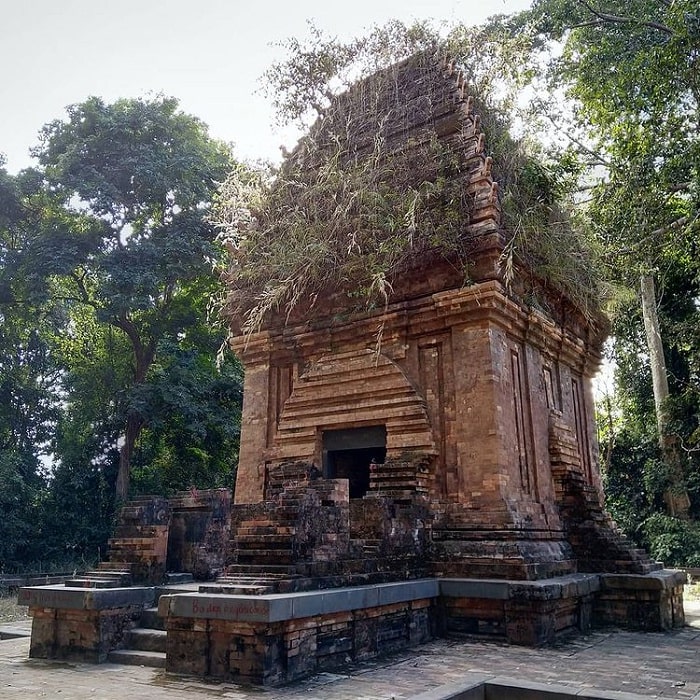 The tower has only 1 main door (Photo @ vietnam.lt)

At the same time, the tower construction material is also a special red brick, with no mortar or bonding substance but can still stick together and endure after a series of fluctuations of time and etching. extreme weather.

Besides, on the fake door, around the main door or the walls, they are all decorated with delicate floral patterns, animals, summoned beasts or spirits, even if the moss has edema and gradually eroded over time, but if we pay close attention, we still see them very clear.

However, the point that makes the Cham tower Yang Prong different from the usual Cham architecture in the Central is that the upper part of the tower is expanded and then narrowed down to look like an onion or a pen tower, extremely impressive. statue. 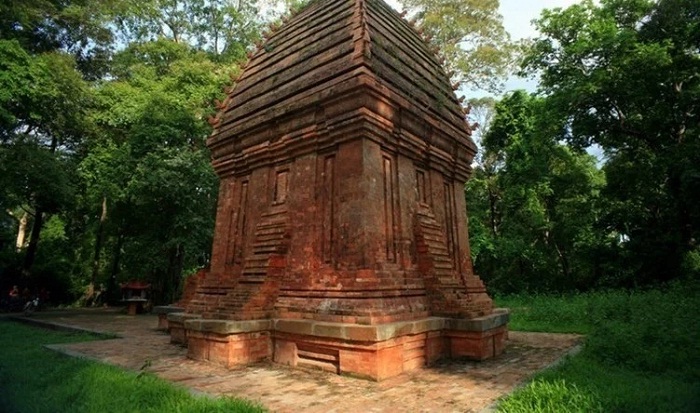 Part of the tower looks like a lotus bud

Moreover, instead of using bricks, the ancient artisans used the stone slabs to paint on the doors and the Cao Bang blue stone as a brick base, making it both firm, puddled and accented. so special.

In addition, the space inside the tower is only 5m3 wide and there is no statue of worship or decorated with any motifs. Therefore, there are many assumptions that have been made, that it is possible that the statue of god was destroyed in the war that one cannot find or in the first place it was not available but I was only thought by everyone. just thinking in mind.

But whether or not it is undeniable that Yang Prong tower is an important testament to the existence of the Cham people in the Central Highlands and acts as an ambassador to promote architectural culture. unique to an era that was once very golden.

Unforgettable experience at the Cham tower of Yang Prong

It is known that the Cham Tower of Yang Prong is a religious work worshiping the holy Siva in the form of Mukhalinga – an important deity in the culture of the Cham people, so from the people of Ea Sup land such as: Ede, Gia Rai , M’nong … until Kinh people all bring together to bring ceremony here to offer to the gods to pray for health, fortune, fame, peace and happiness. 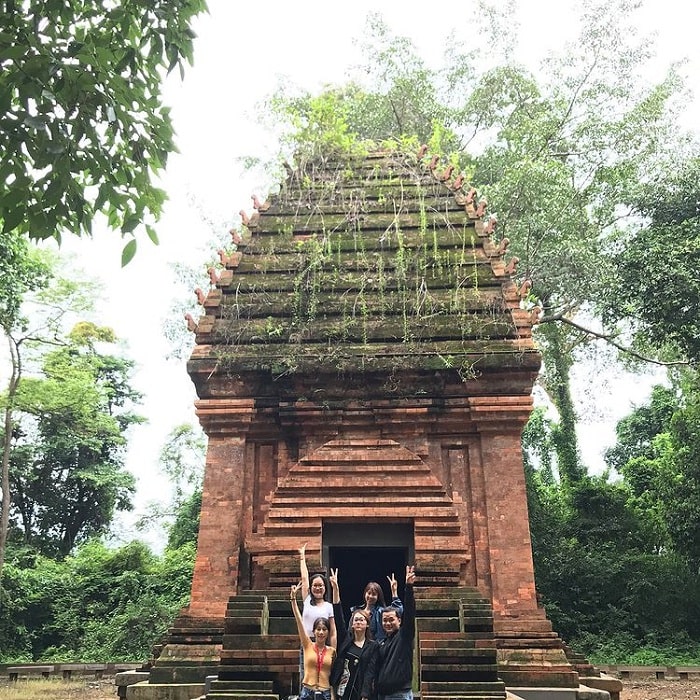 Not only that, near the tower, there are also many famous tourist attractions of Dak Lak such as Buon Don tourist area , Ko Dung village or Troh Bu eco-tourism area , … During the day, you will learn more and more interesting things about life and culture of the ethnic people in this land. It can be said that the Cham Yang Prong tower in Dak Lak  is a strong testament to the once splendid existence of the Khmer empire on the beloved S-shaped strip of land.