Among these projects, Thu Thiem 2 bridge is currently deployed and expected to be completed this year. The work has a starting point at the intersection of Ton Duc Thang – Le Duan (District 1), crossing the Saigon River and connecting Vong Cung Boulevard (route R1) of Thu Thiem Urban Area. The project is more than 1.4 km long, of which the bridge section is 886 m with 6 lanes. The cable-stayed bridge design has a dragon-shaped main tower 113 m high, leaning towards Thu Thiem. Groundbreaking in 2015, Thu Thiem 2 Bridge project with an investment of 3,082 billion VND, implemented in the form of BT (build – transfer), Dai Quang Minh Real Estate Investment Joint Stock Company is an investor. The work is expected to be completed in 2018, but for some reasons, it should be delayed until 2020.

However, the project continues to fail due to problems in capital and about 11,000 m2 of land in District 1 has not been delivered. Currently, the work reaches more than 70% of the volume and is scheduled to be completed in September this year.

At the same time with artistic lighting design, the project will be a prominent architectural highlight on the Saigon River and a symbol of the gate greeting from the center of Ho Chi Minh City through Thu Thiem New Urban Area.

Thu Thiem 4 Bridge connects Thu Thiem new urban area through District 7, with a total capital of 5,300 billion VND. This is one of 55 key projects that the Department of Transport recently proposed the City People’s Committee to prepare for investment in 2021. 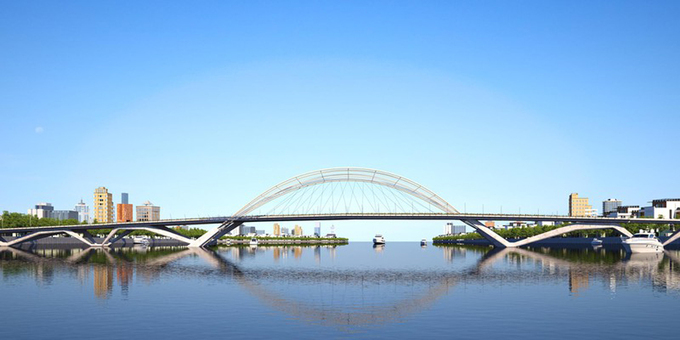 Thu Thiem 4 Bridge previously planned to comply with a BT contract, but this form has just been removed in the Law on Investment under the public-private partnership (PPP) method . This makes the project to adjust the investment policy and the departments in Ho Chi Minh City are studying and proposing to find the right source of capital to build soon.

Pedestrian bridge across the Saigon River is located between Thu Thiem 2 Bridge and the tunnel crossing the Saigon River, connecting Thu Thiem New Urban Area with District 1. It is expected that the bridge foot of District 1 is located in Bach Dang Port Park, near Nguyen Hue pedestrian street. On the side of Thu Thiem new urban area, the bridge foot is located in the riverside park and outside the boundary of zone A – south of the Central Square in this urban area.

According to the design plan, the bridge has a shape of a small leaf as a roof, in order to attract people by accessing the landscape of the Saigon River. The pedestrian bridge also connects the park on the opposite side of Ton Duc Thang Street and the motorbike parking lot at both ends for easy access for residents. When the project is completed, the design unit proposes that the bridge can organize music festivals, public arts, yoga … during the daytime; Night for outdoor cinema activities, 3D lighting water music shows … 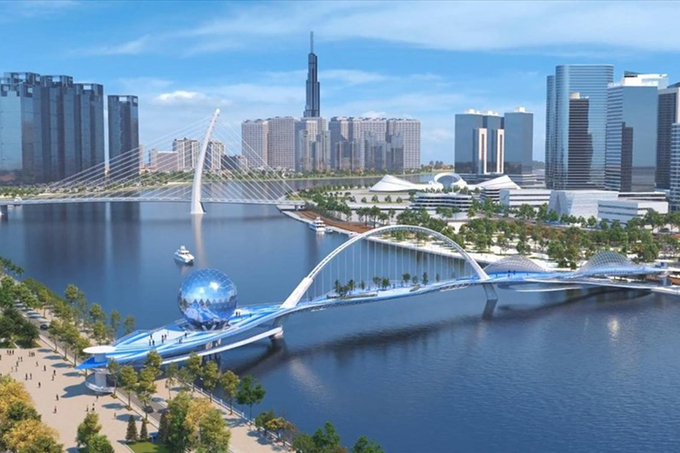 A pedestrian bridge perspective across the Saigon River. Photo: Department of Planning and Architecture of Ho Chi Minh City.

In September 2020, the People’s Committee of Ho Chi Minh City basically agreed on this architectural plan. However, the city noted that the project should be synchronous and suitable with regional planning. At the same time, when completed, the bridge will only be used for pedestrians and vehicles of the disabled; prohibiting all forms of trading, business … Currently, the City People’s Committee has assigned the Department of Planning and Architecture to coordinate with stakeholders to complete the design plan for consideration and decision.

In addition to the above three projects, in Thu Thiem new urban area as planned, the Thu Thiem 3 bridge project connecting through District 4 is being studied for investment. The bridge starts from Ton Dan Street (District 4), crosses Nguyen Tat Thanh Street, crosses the Saigon River, connects Thu Thiem new urban area. Five years ago, Ho Chi Minh City assigned a consortium of two companies to research and formulate an investment proposal for the Thu Thiem 3 bridge project; At the same time, to expand and upgrade Ton Dan Street (District 4), but it has not been deployed yet.

Currently, cars from Thu Thiem new urban area to the city center mainly pass through the tunnel across the Saigon River and Thu Thiem 1 bridge . This lacks connection and limits the socio-economic development on both sides, especially Thu Thiem.