Besides the big theater in Hanoi capital or Ho Chi Minh City, Hai Phong Opera House is also one of the typical architectural works of Vietnam.

Located in Hoang Van Thu, Hong Bang district, downtown Hai Phong , the Opera House or City Theater is a destination not to be missed by tourists in the travel itinerary “red phoenix flower city. “.

In 1904 at the beginning of the 20th century, when the number of French nationals and troops accounted for thousands of people in Hai Phong, the French government chose the spacious and tall market of An Bien ancient village, at the intersection of the area. Vietnamese, European and Chinese people to build a theater to serve the spirit of the people.

After 8 years of construction, by 1912, this work was completed and named ” Western theater ” and became an important cultural and political place of the French and rich indigenous peoples. have. However, only the famous French bureaucrats or the famous singing troupes of our country can enter here to perform. 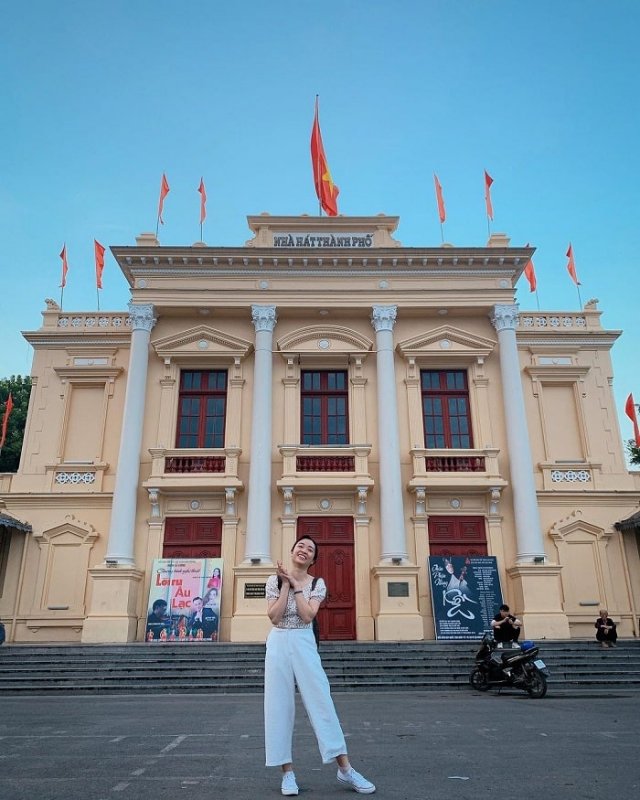 In particular, the Hai Phong Opera House is also a testament to many important events during the nation’s resistance war against the French. Typically on August 23, 1946, the provisional Revolutionary People’s Committee of the city was officially launched here.

In addition, on November 10, 1946, this place witnessed a bloody war that destroyed 50 French soldiers with tank support, 13 soldiers of the National Guard and the Vietnamese cultural propaganda army. The South was led by platoon leader Dang Kim No, and then heroically died forever.

Through its great cultural, historical and architectural values, in December 2015, the Ministry of Culture, Sports and Tourism recognized this work as a national monument .

Hai Phong Opera House was built under the direction of a French architect and materials are also transferred directly from France to Vietnam, so its architecture is like the prototype of the Paris theater.

Accordingly, this work has the Baroque style – a type of artistic architecture that initially appeared in Italy, then because it was so unique, it became a prominent and popular trend throughout Europe at the end of the 16th century. to the mid to 18th century. 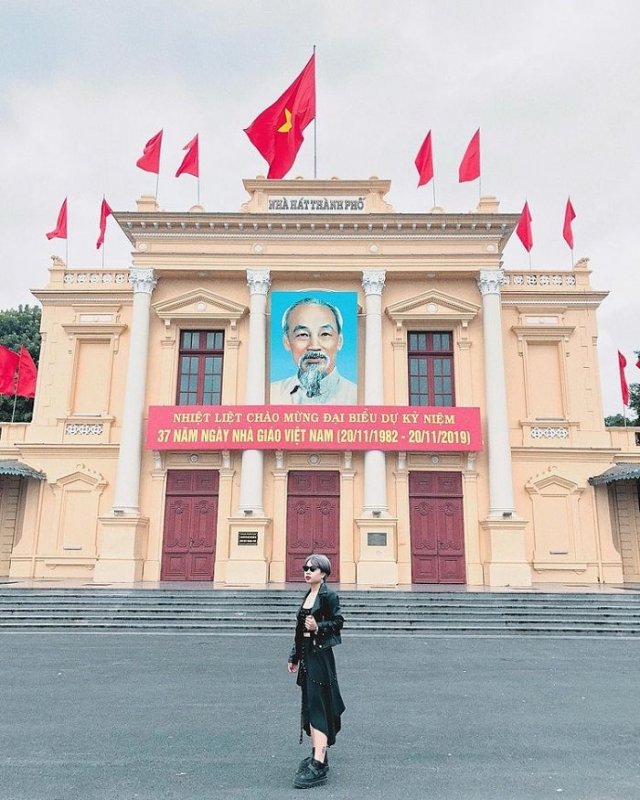 The first impression of visiting with n Galaxy City Theater in Hai Phong is 2 tier architecture massive total of 100 doors and windows, and painted yellow highlights blue sky immense. Along with that are 4 white pillars designed in soft Congdieng style, pressed against the wall to increase the strength of the wall, as well as create accents for the building.

In particular, the facade is designed in a tightly symmetrical structure horizontally, from the distance between the columns, the doorways to the decorative motifs, creating a flawless beauty. 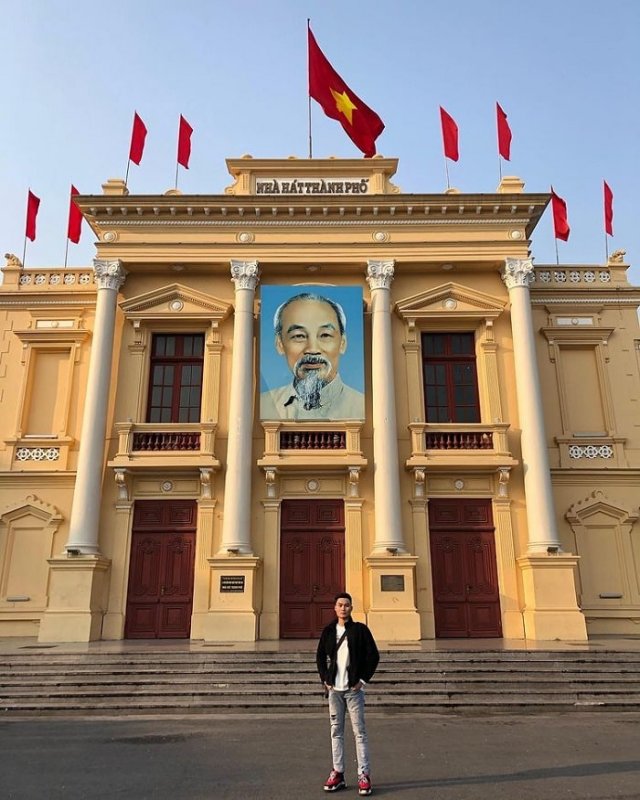 However, the most expensive point in the exterior architecture of Hai Phong Opera House is the image of the Lia instrument – a noble symbol of the kettle, carved on the door, making anyone visiting. can not stop admiring.

In addition, in front of the theater is a large square with colorful flower gardens embracing the white art fountain like a mist and the flagpole of the dangerous country, creating a space that is both nationalistic, both modern, international luxury. 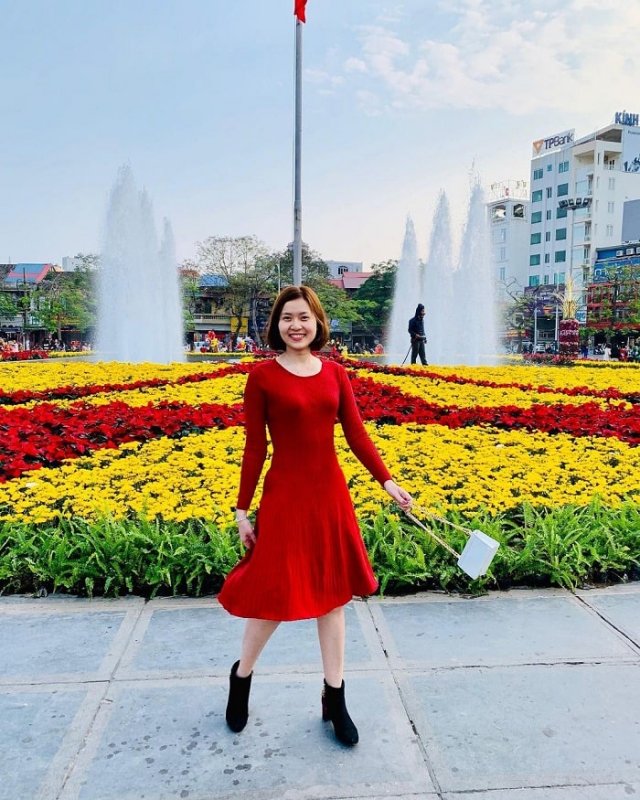 Outstanding works in front of the theater (Photo @anhthutt)

If outside the West Theater in Hai Phong, stands out with its sturdy and straight lines, the inside attracts visitors by taking advantage of the curves and domes to create rhythm and lively and attractive spaces. eye.

The space inside is quite large, with the first floor being the lobby – a place dedicated to receiving guests, with luxurious European-style furniture and elaborate, lavish motifs like a royal room. 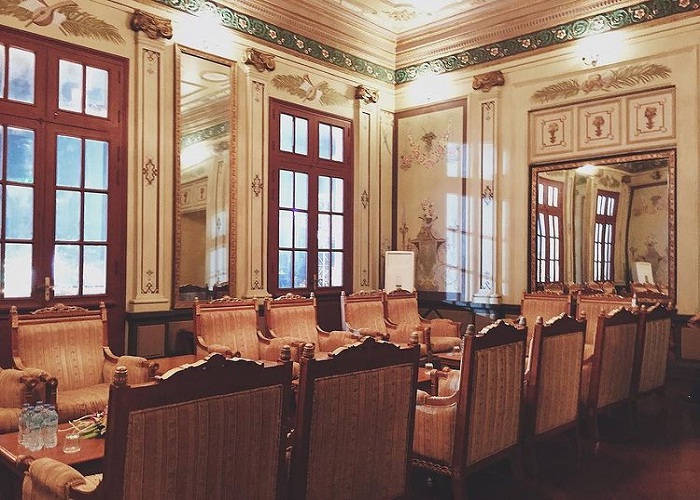 The second floor is the main auditorium, specializing in organizing important events, with 400 seats covered with luxurious red velvet – fine – smooth and the doors are designed in an impressive Gothic dome.

In addition, on the stage, there was a statue of the music god – the god of protection for the artists, two wings on both sides were the actors’ rest room and makeup room, and the windows used insulated glass. sound, very comfortable and modern. 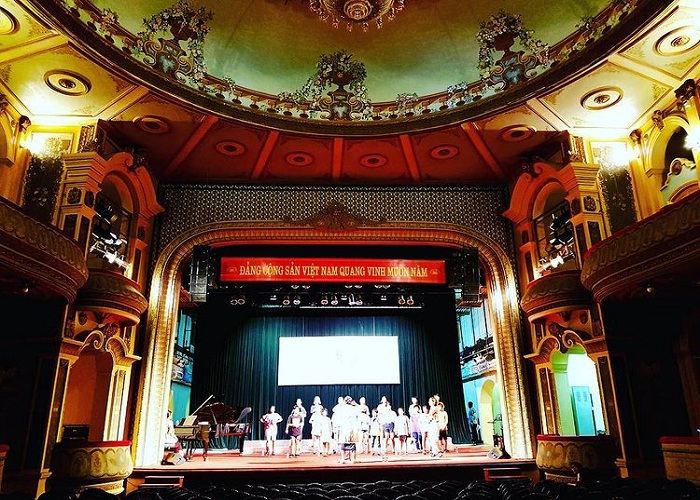 The subtle design of the main auditorium (Photo @han___ddo)

However, the most prominent feature in the auditorium of Hai Phong Opera House is probably the ceiling, designed in an arch shape to both enhance the height of the theater and create an echo for the sound, helping the residents. at the end can still be heard clearly.

Especially it is adorned with beautiful flower baskets with the names of famous musicians and playwrights in Europe such as Betthoven, Mozard or Moliere … making viewers unable to take their eyes off. 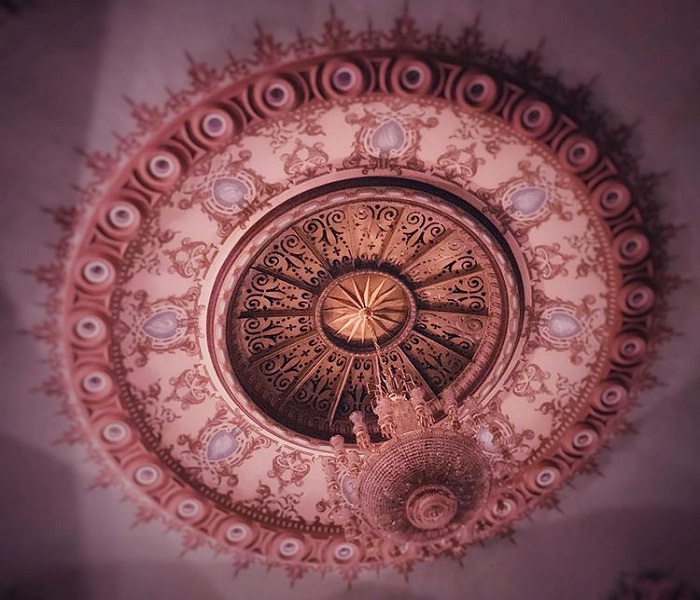 Although to this day, Hai Phong’s Opera House has undergone many repairs, but only changed small details, the items were damaged due to being too old and repainted new paint colors, so the Unique architecture from the time it was built still remains intact.

Furthermore, at night the building is lit up like a giant celestial ball that illuminates the night sky. Moreover, the fountain also displays artistic water strips of all colors, extremely impressive. The City Theater is considered the center to organize major cultural and political activities of Hai Phong such as: rallies, celebrations or celebrations … rake off important holidays and New Year of the people. clan. At this time, people coming here not only can enjoy attractive performances but also participate in many extremely interesting entertainment games. Sometimes, the theater even organizes exchanges with foreigners for cultural exchanges as well as to promote Vietnam’s beauty internationally.

However, not only when the big events take place, but because it is located in the city center, even on normal days at night, a lot of young people, old people and young children gather. In the area in front of the door, flower tubs or fountains to cool and talk together, creating a strangely peaceful scene. 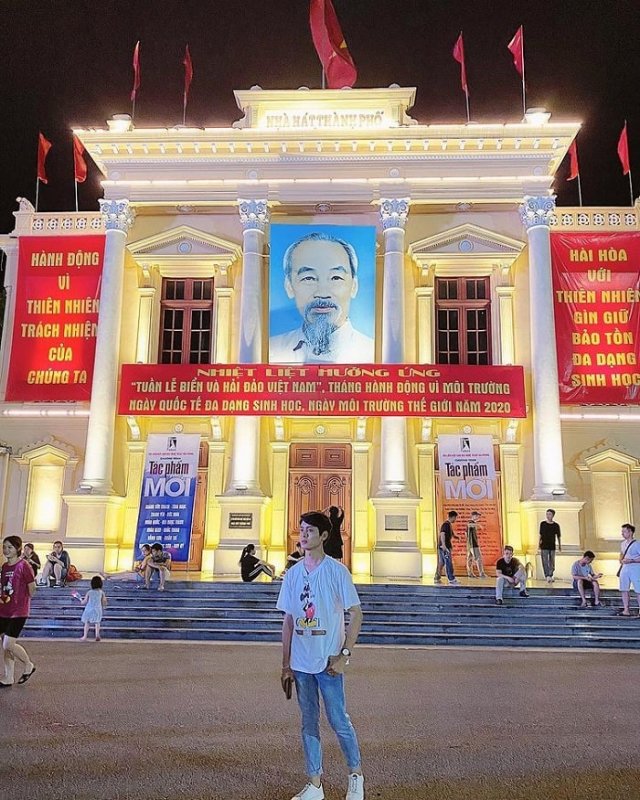 A lot of people visit the theater at night (Photo @khanhtoanls)

If you travel to Hai Phong during the day, do not have the opportunity to stay at night to enjoy the scene, you should also stop by to make some virtual living photos like Europe, and watch the national flag flutter. fly in front of the great portrait of Uncle Ho hanging in large format at the main door, you will definitely see a spark of love for water. 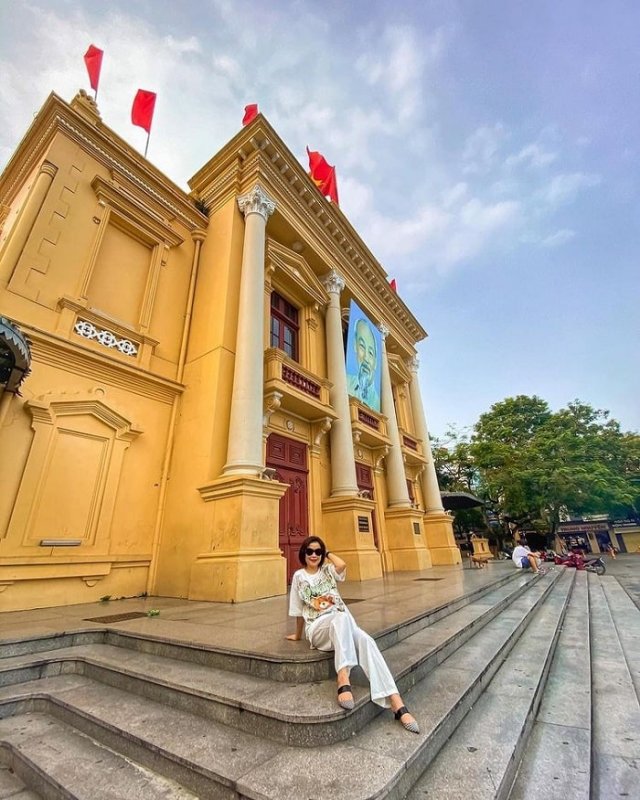 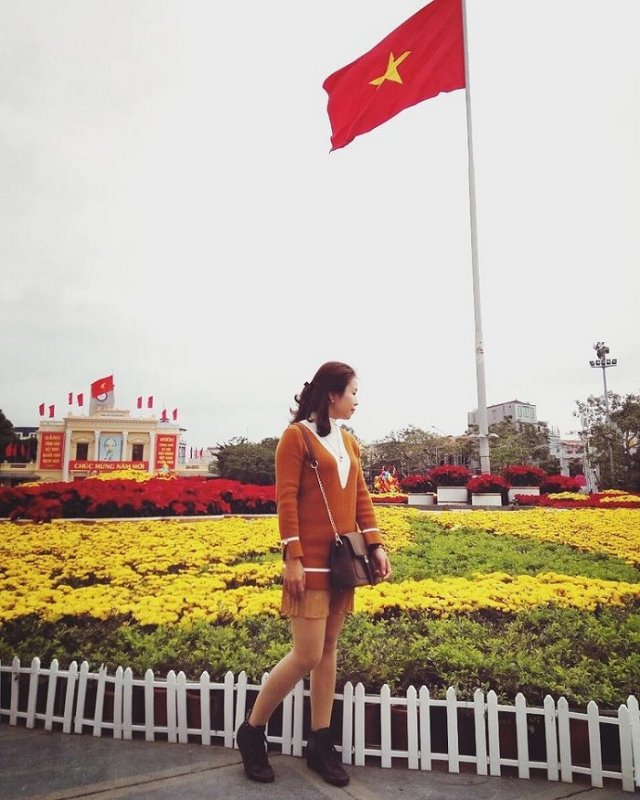 Silence in front of the national flag (Photo @ pham.k.truc)

Coming to the city of red phoenix flowers without visiting the Hai Phong Opera House – an architectural symbol, you will definitely regret it.