Visiting Nam Dinh museum, visitors will learn about the antiques and unique cultural and artistic values ​​of the land of Thanh Nam. Let’s explore what Nam Dinh museum is so attractive to tourists through the following article. 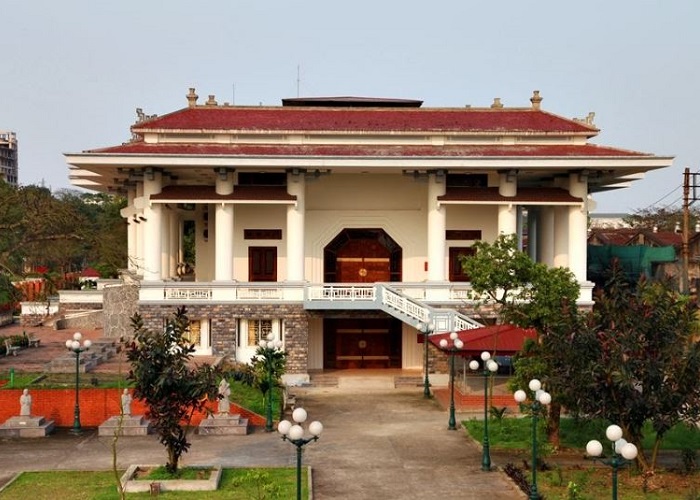 Passenger car : Bus routes from Hanoi to Nam Dinh depart from Gia Lam, My Dinh, Giap Bat bus station … There are Anh Kien, Nam Tien, Chinh Luan coaches with fares from 100,000 VND depending on each range of the vehicle. Traveling to Nam Dinh from Saigon, you can take Hoang Long from the East bus station to Nam Dinh directly. Ticket price from 600,000 VND. 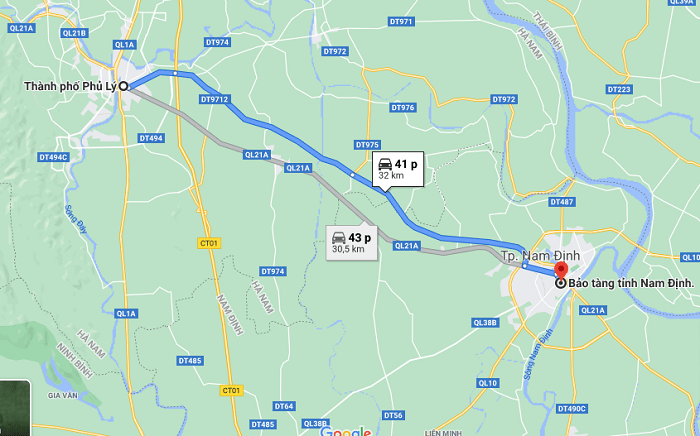 How to move to Nam Dinh museum

Airplane : For you in the Saigon area, the most convenient is to go by plane to Noi Bai airport (Hanoi), then take the train or bus according to the instructions above to Nam Dinh.

Motorbike : The distance from Hanoi to Nam Dinh is 90km, visitors can choose motorbikes to take the initiative in travel time. Take the Giai Phong route to the Phap Van junction, then turn on the expressway to Cau Gie. Continue on Highway 1A for about 16km to the end of Phu Ly town, then turn left in the direction of NH21A, follow the signpost about 30km to reach Nam Dinh.

To visit Nam Dinh museum, take a taxi or motorbike taxi to the museum located in the center of the city. Or you can rent a motorbike with the price ranging from 100,000 VND / day to conveniently travel and explore many other beautiful places in Nam Dinh.

Opening hours of Nam Dinh museum are as follows:

– The opening schedule to visit the museum depends on the area, for the exterior area and the monument Flagpole is open on all days of the week including Sundays. If you visit the display system at the museum, it is open on Tuesday – Thursday – Sunday, Tet holidays. 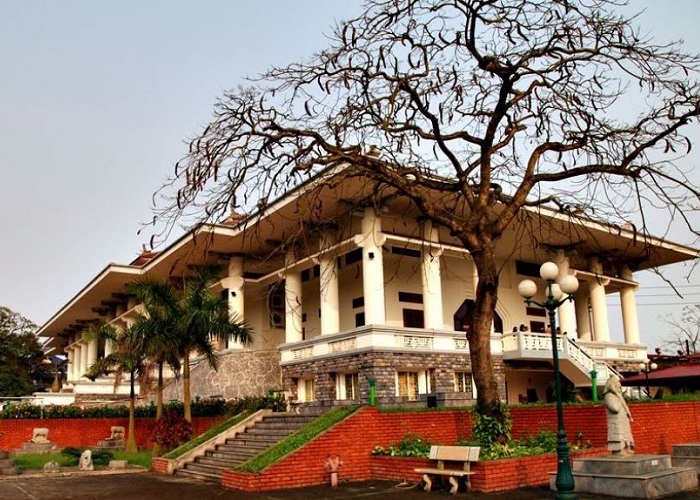 What is Nam Dinh museum visiting?

Nam Dinh Museum was built in 1958, formerly known as Nam Dinh Cultural Ty. The total area of ​​the museum includes 12,000 square meters, of which 5,000 square meters are used for construction. Visiting Nam Dinh museum, visitors will visit 3 floors, of which the first floor is the display of artifacts and the administrative area, the 2nd and 3rd floor is the place for the exhibition of topics. 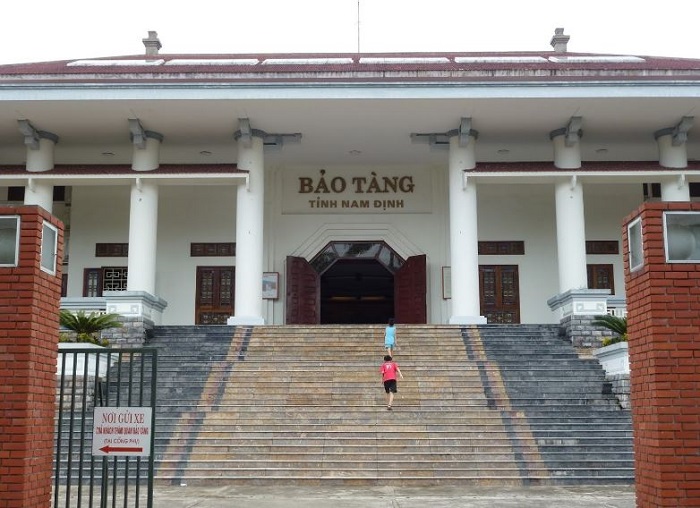 The entire space of the museum consists of two parts: the indoor and outdoor exhibition area. Nam Dinh Museum is the place to keep thousands of artifacts, documents reflecting the entire life and social history of Nam Dinh province over the periods. Each period corresponds to its own collections of artifacts such as: Terracotta dynasty, Chuong Son tower sculpture, Le-Mac pottery, Tran architecture, pictures of Thanh Nam, Huong exam school. under the Nguyen house. 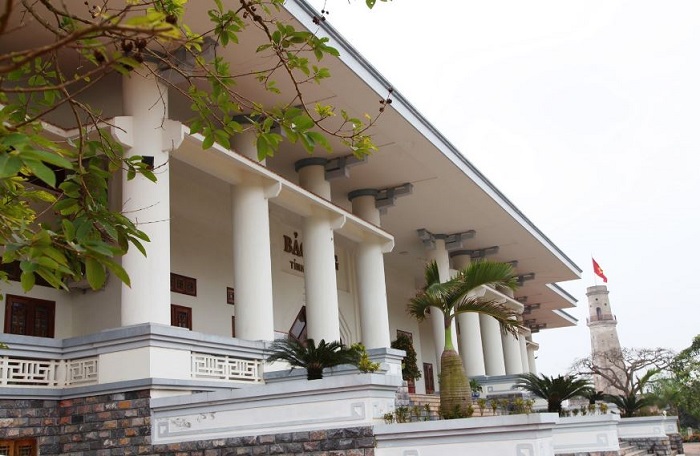 Architecture outside of Nam Dinh museum

Discovering the most impressive Nam Dinh museum is its permanent display of Tran and Ly artifacts. As follows:

Display of the Ly dynasty from the XI – XIII centuries: including documents, pictures and artifacts of the Chuong Son stupa dwelled on Ngo Xa mountain.

Displayed in the Tran dynasty from the thirteenth to the fourteenth centuries: With the content about the triumphal land of the Tran dynasty and the homeland of Nam Dinh, the structure of the Palace of Heaven, archeology of the time. 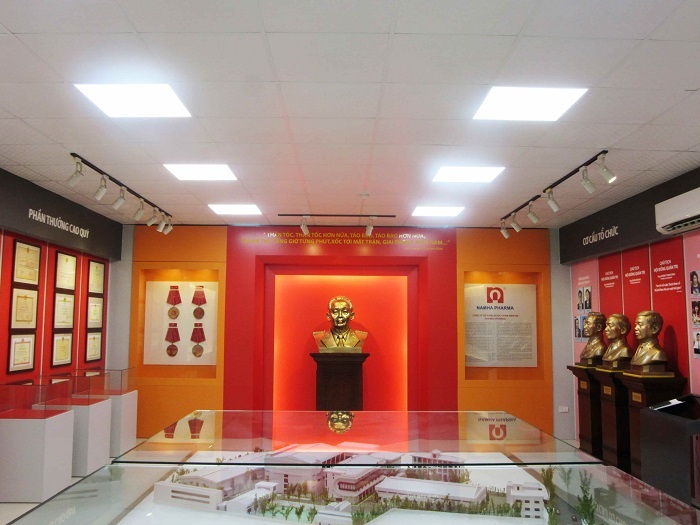 Visiting Nam Dinh museum with outdoor display area mainly works of religious and sculpture art from the thirteenth – twentieth centuries. Including weapons used in the war against the US, excavation of monuments and archeology of Nam Dinh through the periods. In particular, in the premises of the Nam Dinh museum, there is also a monument of Pillar Co built in the early nineteenth century under the Nguyen Dynasty. This artistic architectural work has historical and spiritual significance, is a place of worshiping Princess Giam Huong who has been credited with storing foodstuffs of militiamen in the war against the French. Besides, at the relic Pillar Co also displays pictures and documents about the ancient citadel. 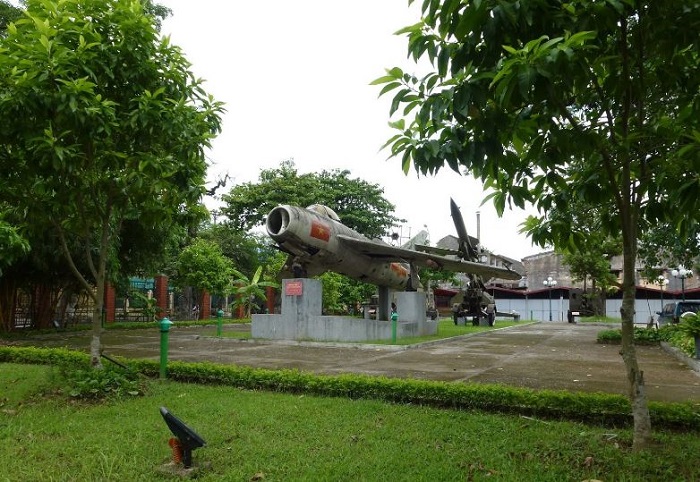 The campus of Nam Dinh museum

Currently, this museum holds about 20,000 documents and artifacts from many genres. The museum is also the place where quintessential antiques exhibitions of the Red River Delta region are regularly held, attracting numerous visitors to participate. Every year, Nam Dinh museum organizes many thematic exhibitions. In addition to the topic of collecting, researching and exhibiting artifacts, it is also combined with traditional craft villages and souvenir houses in the province. 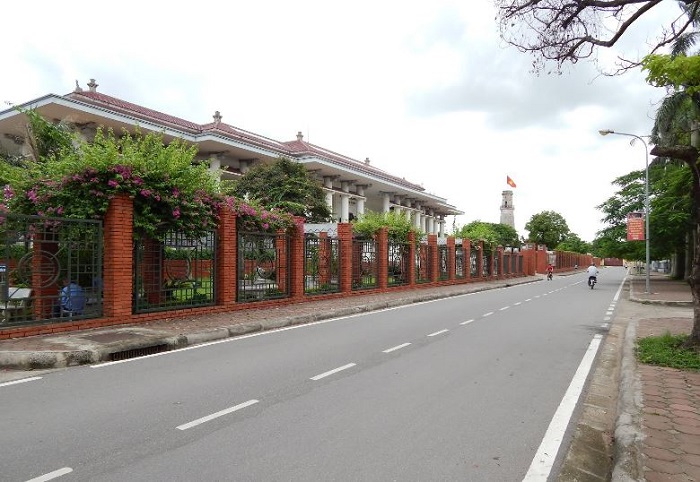 – Dress neatly and should not talk loudly while visiting.

– Do not touch and climb or sit on objects to take pictures.

– You can bring cameras and camcorders to take pictures at the museum.

– After visiting the museum, you can combine to explore many other famous landmarks in Nam Dinh such as: Ba Kien House , Phu Day, Tran temple, St. Joseph Church …

Visiting Nam Dinh museum is also an interesting destination that visitors should not miss when having the opportunity to come to Thanh Nam to learn about the cultural and historical characteristics of this place.