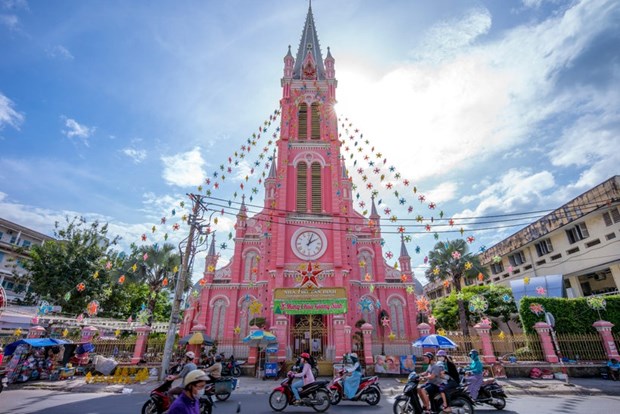 The Tan Định Church in HCM City’s District 3, also know as the Pink Church, is named as one of the top 10 pink global destinations by British magazine Conde Nast Traveler. — VNA/VNS Photo

HCM CITY — The Tan Định Church in HCM City’s District 3, also known as the Pink Church, has been included on the list of 10 "pink" global destinations by British magazine Conde Nast Traveler.

It is one of the oldest churches in the city and considered to be one of the country's most beautiful structures.

It dates back to the 18th century and was built under the supervision of Father Donatien Eveillard, according to Conde Nast Traveler.

Construction commenced in 1870 and completed six years later. It is the second largest church in Sai Gòn after the iconic Saigon Notre Dame Basilica, closed for renovation over the next two years.

On top of the 52m tall main tower stands a cross three metres high. Inside the tower hangs a 5.5 tonne bell. The inner sanctum accommodates two rows of columns, with the altar made of Italian marble.

The other destinations on the list include Pink Beach on Komodo Island in Indonesia, India's Jaipur, the Gallery at Sketch in the UK, Keukenhof Tulip Gardens in the Netherlands and the legendary Don Caesar Hotel in the US. — VNS

Today, 00:15
A close look at AstraZeneca Covid 19 vaccine at cold storages in HCMC

Today, 00:11
Reasons why Son Doong Cave is a great wonder in your travel bucket list

Yesterday, 23:44
Cinematic beauty at the foot of Hai Van pass