The experimental puppet show entitled "The Moon" will make debut at the Vietnam Puppet Theater as a tourist product on February 8.

The puppet show is a combination of many different puppetry genres including water puppetry, land puppetry and human puppetry which will be performed on the soundtrack of Vietnamese folk music. The show aims at providing foreign audiences with more knowledge about traditional Vietnamese culture. 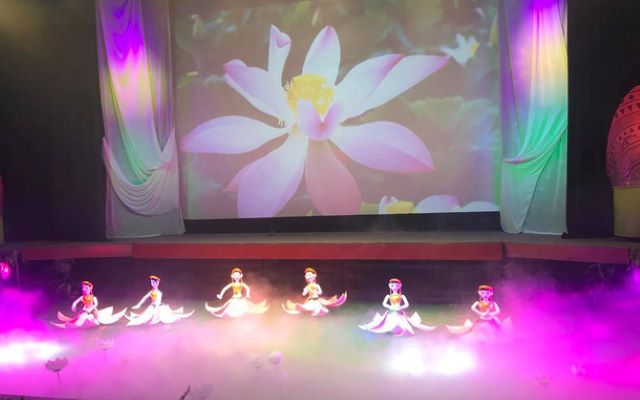 “The Moon” puppet show doesn’t base on any specific Vietnamese tale or story, but combining the unique cultural elements of the regions across the country, with moonlight playing as guiding thread throughout the show.

The audience will be taken to the remote mountainous region with ethnic boys and girls in colorful impressive costumes, dancing under the moonlight with the chirping of chord music and flute.

They will be able to watch the moonlit night in the midlands with water wheels on the stream, where the flying flock of storks is reflected. The warm moonlight brightens the land of the Central Highlands enhancing the beauty of powerful traditional dances of the Ede people.

The moonlight shines gently in the Perfume River in Hue city or highlights unique ‘lotus dance’ and ‘golden tray dance’ composed by Vietnamese living in the southern delta.

The Moon "was created with a desire to have a colorful show that is similar to some art shows in neighboring countries like Thailand, South Korea, among others. Our creative team has combined a variety of Vietnamese traditional music, dance and puppetry in just one show to creating a chic and unique puppet show that has never been performed on a large stage before. We also wish to introduce the unique cultural features of the ethnic minorities in Vietnam in particular and Vietnamese culture in general to foreign spectators in Vietnam through the artistic language of pupetry," said Nguyen Tien Dung, the director of the show.

The puppet show is performed by the Experimental Art Delegation and the Vietnamese troupe - Vietnam Puppet Theater.