Disaster prevention should be a radical, long-term strategy, based on new technology such as forecasting and remote sensing to minimise damage. 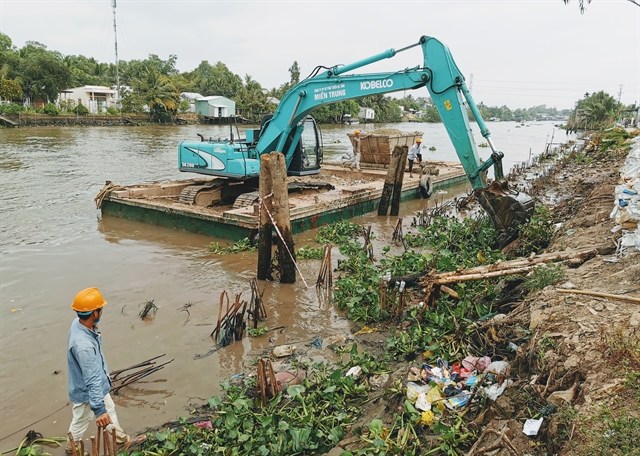 That was the message from Le Minh Hoan, Minister of Agriculture and Rural Development and deputy chairman of the Central Steering Committee on Flood and Storm Control who was speaking at a disaster prevention this week.

According to a report last year by the Central Steering Committee on Flood and Storm Control, in mountainous areas prolonged heavy rain caused landslides and large-scale flash floods resulting in great damage to people and property.

In the first months of this year, a number of damaging cold spells, thunderstorms, lightning and hail storms occurred.

Although the rainy season has not yet started, some localities have been hit by flash floods causing serious damage.

This was rare and signals a year of unpredictable natural disasters in the northern mountainous region.

Natural disasters in this area from the beginning of this year, had caused three deaths and one injury, 320 houses were damaged, 1,086 cattle died, and economic loss estimated at VNĐ25 billion (US$1.1 million).

According to Mai Văn Khiem, director of the National Centre for Hydro-Meteorological Forecast, from April to July, the northern region would likely see strong thunderstorms accompanied by tornadoes, lightning and hail in many provinces and cities.

From April to October, the total common rainfall was forecast equal to the average level of the same period last year.

In April, May, August and September, the total rainfall tended to be 10-20 per cent higher than the monthly average of previous years.

It was necessary to monitor storms and strong winds at sea in the rainy and stormy months this year, he added.

In past years, the natural disaster control sectors had performed well, but preparedness still had shortcomings such as poor awareness and preventive skills of the community in some places, especially in remote and isolated areas, and irregular forecasts and warning information for people in affected area.

The training for the disaster prevention and control staff and the dissemination of information for the people in the affected areas had not been thorough enough or effective.

Infrastructure systems and preventive control infrastructure lacked synchronisation, had limited resilience, and some areas remained damaged or degraded due to previous natural disasters.

“We focus on overcoming disaster consequences but tend to overlook the work of disaster prevention and preparedness.

“Normally, when there was a natural disaster, we worked together to combat it and then handle it, but when the disaster was over, we forget the work ahead.

“Prevention was not just for one or two years in the future, but it must be a long-term strategy based on new technology such as forecasting and remote sensing. This would minimise the damage caused by natural disasters.”

In order to perform the work of disaster prevention and search and rescue in the future, the minister suggested localities in the region need to overcome limitations and shortcomings, co-ordinate closely with relevant ministries and branches to effectively implement the prevention and control work as well as strictly follow legal documents on anti-disaster, especially Directive No. 42-CT/TW of the Party Secretariat.

The local authorities should promote information dissemination on natural disaster prevention and control in the community as well as allocate resources to implement the project of community awareness improvement and disaster risk management.

In addition, priority should be given to allocating budget in the mid-term plan of 2021-2025 for localities, and funds for disaster prevention and control, especially preventing flash floods and landslides and safeguarding dykes and reservoirs, Hoan said. — VNS