The overexploitation of groundwater in the Cuu Long (Mekong) Delta has contributed to severe land subsidence, which could lead to devastating consequences if the practice continues, experts have said. 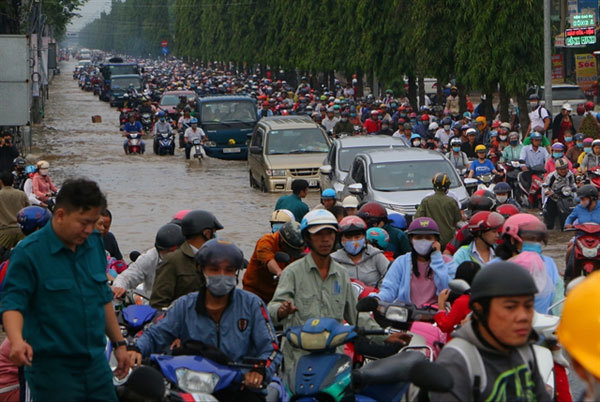 Nguyễn Văn Cừ Street in Can Tho City’s Ninh Kieu District was flooded by high tides in October last year. High tides and land subsidence have contributed to flooding in the city in recent years.

The delta, the country’s largest rice, fruit and seafood producer, is facing a land subsidence rate of 1 cm per year, with some areas reaching a rate of 5.7 cm, according to the Ministry of Natural Resources and Environment.

Can Tho City has the highest rate of land subsidence, with more than 5 cm in most areas during the 2015 – 19 period.

Speaking at a seminar held in Can Tho ealier this week, Tran Quang Khai of the HCM City University of Technology’s Water Management and Climate Change Centre, said that if Can Tho continued exploiting groundwater, most areas would become lower than sea level by 2100.

Construction projects in Can Tho have also worsened land subsidence.

"The delta exploits 2 million cu.m of groundwater a day, according to reports, but the reports do not include all household bore wells, so the volume is actually higher," said Khai.

Nguyen Huu Thien, an independent expert on Mekong Delta ecology, said the cost of using surface water was higher than that of groundwater.

He said the delta should develop zoning of areas where groundwater exploitation should be restricted.

Seminar participants said that raising public awareness about the problem was needed and that the surface water and rain water should be used more.

Strict legal regulations to protect groundwater resources in the delta were also needed, they said.

Nguyen Thuc Hien, deputy chairman of the Can Tho People’s Committee, said the city had zoned areas which restrict groundwater exploitation and had taken measures to prevent the practice.