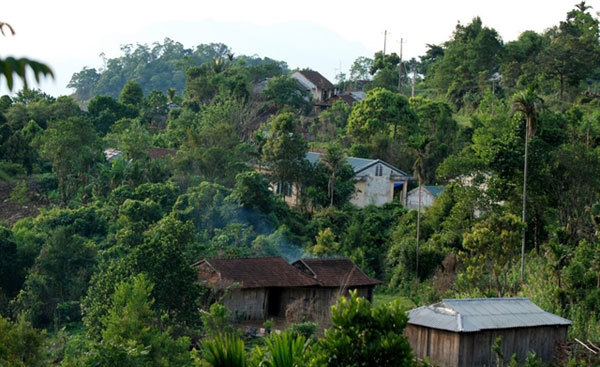 They have been protected for hundreds of years by the Cor ethnic people in Que Village.

The village on Ca Dam mountain is named after a precious tree species in the forest with a very characteristic fragrance - cinnamon, according to Ho Van Thiet, 62, an old villager.

Growing for hundreds of years, the forest had been the treasure of Que villagers through generations, Thiet said, adding that it was considered the pharmacy store of villagers.

According to Ho Quang Tao, head of Que Village, the village has its own law to keep the forest.

Local residents who illegally fell trees can be warned, fined, forced to plant new trees or even expelled from the village.

Cattle are forbidden to enter the forest and locals who fail to keep their cattle out of the forest will face punishment.

“Thanks to the very good awareness of keeping forests of the whole village, Ca Dam forest is still intact and home to types of ginseng and cinnamon," Tao said.

There are 98 households of Cor ethnic people living in the village. They have found about 40 types of ginseng and medicinal herbs in Ca Dam forest and preserved them.

There is no official study on the potential and advantages of Ca Dam forest and ginseng species as well as medicinal plants.

"The value of the trees is assessed based on the experience and knowledge of the villagers," said Tao.

More than a decade ago, most of the ginseng and medicinal plants in the forest were only used by the Cor community.

In recent years, many species of ginseng have been sought by traders for high prices, especially seven-leave ginseng.

According to Ho Ngoc Lam, Party secretary of Que Village, seven-leave ginseng is a precious plant and must be preserved as it is at risk of fading away.

Many villagers in Que Village grow ginseng to preserve the native source of the plant and Tao is one of them.

He grows many types of ginseng in his 3,000sq.m garden and also plants cinnamon and tea trees to create a canopy and cover for the ginseng.

Huynh Thi Thanh Thuy, head of the Agriculture and Rural Development Department of Tra Bong District, said the Cor community protects hundreds of hectares of forest to live with and benefit from ginseng and other medicinal plants.

The local authorities will submit a proposal to the district and province for the future development of Que Village, according to Thuy.

In 2017, the People's Committee of Quang Ngai Province approved the biodiversity conservation plan for 2025-2030, aiming towards the protection and sustainable development of natural ecosystems of the province as well as improving the management and public awareness of forest protection. VNS

Today, 09:07
Regret all youth if you don’t check in to Ngoc Thuy Hanoi reed grass