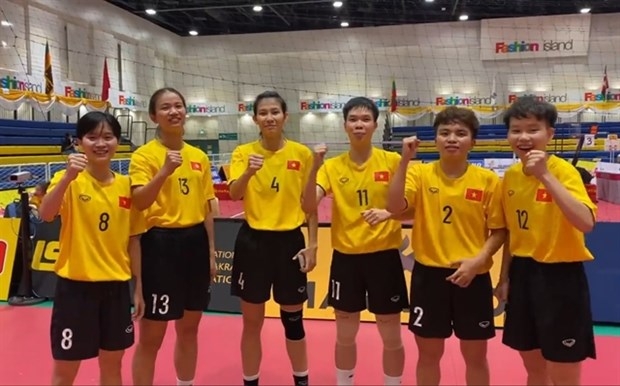 World championship winners, Vietnam, pose for photo after their win in Thailand on July 27. (Photo of takrawworld)

They defeated the hosts 2-0 in the women's quad (group of four) event, which was organised for the first time at the annual championship, to take the historic title.

Tran Thi Ngoc Yen’s tough strikes helped Vietnam quickly win the first set 21-15. The Thais came back strongly in the second and almost levelled things up with the score 22-21 to Vietnam.

It was Sasiwimol Janthasit who made a mistake with a strike that hit the net, bringing Vietnam to 23-21 to win the title.

It was sweet revenge for the Vietnamese after they lost to the Thais in the final of the same event at the 31st SEA Games two months ago in Hanoi.

The win also ends Vietnam’s 16-year losing streak to world No 1 Thailand in this category.

On their way to the finals, Vietnam beat Malaysia, Cambodia and Pakistan 2-0 to advance to the semi-finals. They then beat South Korea 2-0 to enter the final.

Vietnam also ensured at least a silver medal in the women's regu event as they qualified for the final match, where they will meet with the Republic of Korea.

The 35th world championship has been held annually in Thailand since 1985, though 2020 and 2021 were not organised due to the COVID-19 pandemic.

This year's tournament began on July 24 and will close this Sunday at Fashion Island Sports World.

Vietnam took to Bangkok 15 athletes, competing in six out of 10 categories available.

Today, 19:34
Many activities at the food culture festival in Ho Chi Minh City

Today, 19:30
Bitcoin Value Falls Under $23,000 After Earnings Report Reveals That Tesla Offered 75% Of Its BTC