NDO – Vu Tien Long rescued a point for Vietnam in a 1-1 draw against title holders Republic of Korea in Group C of the AFC U23 Asian Cup Uzbekistan 2022 on Sunday.

The Koreans took the lead a few minutes after the hour mark, only for a fighting Vietnam to draw level in the 83rd minute. It was the second consecutive draw for Gong Oh-kyun’s side following the first against Thailand three days ago.

The draw meant defending champions Republic of Korea were denied the opportunity to seal their berth in the knockout stage with a match to spare, while 2018 runners-up Vietnam are still very much in the race to advance.

The Republic of Korea demonstrated power of the reigning champions by dominating ball possession right from the first whistle and pouring constant pressure on the Vietnamese goal.

Hwang Sun-hon’s troops could have taken the lead as early as the eighth minute when Goh Young-jun pounced on the loose ball in midfield before finding Park Jeong-in in the area, but Park could only force goalkeeper Quan Van Chuan into a parry.

Vietnam created their best chance of the first half in the 32nd minute when Vu Tien Long collected Khuat Van Khang’s cross at the near post, only to see his strike rattle the side netting. 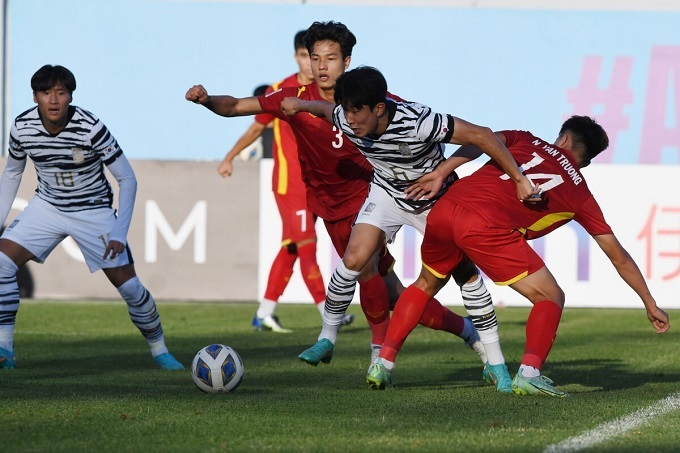 The Republic of Korea should have broken the deadlock three minutes from the break when Jeong burst into the area before pulling back to find an unmarked Eom Ji-sung, but the Gwangju FC midfielder’s tame shot was thwarted by goalkeeper Quan Van Chuan.

Cho Young-wook brought the Republic of Korea off the mark in the 63rd minute with a low shot at the far right bottom corner.

Hwang Sun-hon’s side were forced to play with just ten men on the field when Lee Jin-yong received two successive yellow cards for a foul on Nguyen Van Tung in the 78th minute.

Vietnam fully utilised their numerical advantage to press forward and they were rewarded five minutes later when Phan Tuan Tai’s cross flashed across the face of goal to find Vu Tien Long, who unleashed an unstoppable strike to make it 1-1.

Next up for Vietnam will be their final group match against Malaysia on Wednesday, while the Republic of Korea face Thailand.