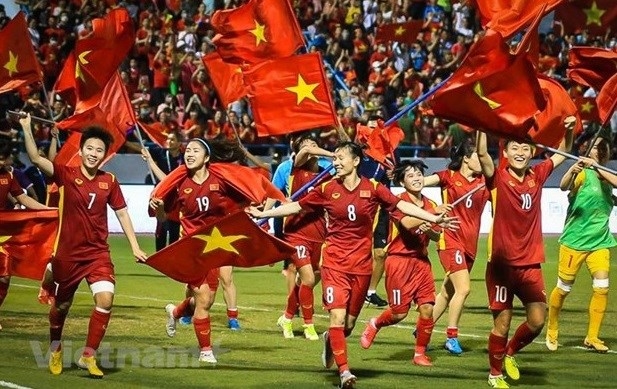 The U23 men’s and women’s football teams will be awarded the third-class Labour Order (Photo: VNA)

NDO/VNA – President Nguyen Xuan Phuc on May 31 signed a decision to confer the Labour Order to athletes who made outstanding achievements at the 31st Southeast Asian Games (SEA Games 31).

Under the decision, the second-class Labour Order will be awarded to swimmer Nguyen Huy Hoang who won five golds and broke two records at the Games, swimmer Tran Hung Nguyen with four golds and two records, Nguyen Thi Huong with five golds in canoeing, and runner Nguyen Thi Oanh with three golds and one record.

The U23 men’s and women’s football teams and 19 athletes in aerobic, swimming, canoeing, athletics, dance-sport, finswimming, rowing, gymnastics and weightlifting will be awarded the third-class Labour Order.

The SEA Games 31 took place in Hanoi and 11 nearby localities from May 12-23. The biennial event was initially slated for late 2021 but delayed due to the COVID-19 pandemic.

Vietnam ranked first in the medal standings with 205 gold, 125 silver and 116 bronze medals. Thailand came second with 92 golds, 103 silvers and 136 bronzes, while Indonesia finished third with 69 golds, 91 silvers and 81 bronzes.