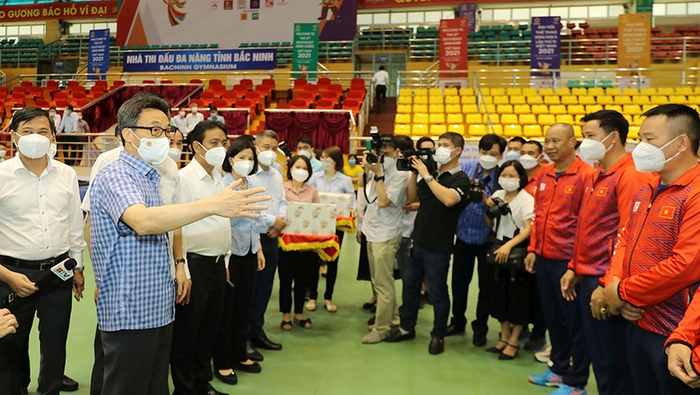 NDO – With only a few days left, the 31st Southeast Asian Games (SEA Games 31) will officially kick off in Hanoi and 11 neighbouring provinces and cities, featuring the participation of more than 7,800 athletes, coaches and officials from 11 countries throughout the region.

To ensure the success of the Games, the provinces and cities have completed the infrastructure as well as perfected the plans to ensure the safety, security, pandemic prevention and control, logistics and other services.

The capital city of Hanoi is a key area where the opening and closing ceremonies and 18 sports will be held. Therefore, the preparations have been made urgently and completed, ready to welcome the Games.

The restoration and upgrade of competition venues

The opening ceremony will feature a unique art performance themed “For a stronger South East Asia”, which will be divided into three chapters: “Friendly Vietnam”, “Strong Southeast Asia” and “Shining Southeast Asia”. A parade of athletes, a ceremony to raise the Vietnamese flag, the national anthem and the raising of the flags of Southeast Asian countries will also be highlighted at the opening ceremony. In the early days of May, under the direction of Meritorious Artist Tran Ly Ly, Acting Director of the Performing Arts Department, 3,000 actors and actresses from the theatres, universities, schools and agencies have been enthusiastically practising.

Bac Giang province's Sports Gymnasium is a venue for badminton matches from May 16-22. Following thoughtful preparations, the gymnasium’s facilities have been completed. Meanwhile, the table tennis sport will be held at Hai Duong provincial Gymnasium from May 13-20. According to the Director of Hai Duong provincial Department of Culture, Sports and Tourism Nguyen Thanh Trung, the province allocated about 10 billion VND to repair and upgrade the gymnasium’s infrastructure and install modern equipment according to high-quality standards. In Hoa Binh province, the preparations for cycling races are ready, from infrastructure, the racetrack, services, reception of delegations, urban decoration and training of volunteers, have all been completed.

SEA Games 31 will be an opportunity to promote the image, brand, cultural and tourism advantages of Vietnam in general and the localities in particular. So far, all 30 districts and towns of Hanoi have decorated the landscapes and environment as well as addressed violations of urban order. Nam Tu Liem district, which consists of My Dinh Stadium and several other competition venues, has decorated streets in its 10 wards with clusters of panels, posters, banners, slogans and flowers. Meanwhile, many wards in Hoan Kiem district mobilised people to clean their houses and planted more trees to leave a good impression on international tourists. During the SEA Games, 16 cultural and art programmes throughout the city centre, districts and towns in the capital city, will be held to serve local people and international visitors.

Over the recent months, the improvement of the urban face has been drastically carried out by Bac Giang provincial People’s Committee. Thousands of square metres of sidewalks have been repaired, and thousands of trees on the streets have been replaced or newly planted. Xuong Giang bridge across the Thuong river, the entry point to the city, has been cleaned and decorated with flags, panels and slogans. Bac Giang city’s authorities have mobilised the locals to install LED lights running around their walls, combined with decorative lights on the trees, which will help the city shimmer and be fanciful at night.

The agencies, enterprises and households in the northern city of Hai Duong were encouraged to invest in paving stones or bricks on sidewalks in front of their houses. The city also allocated 85 billion VND from its budget to renovate the system of trees, sidewalks and water drainage in main streets and the areas around the gymnasium.

According to data from the Organising Committee of SEA Games 31 in Hanoi, more than 7,800 people, including officials, coaches and athletes from 11 countries, will attend the event. In addition, there will be 1,300 international referees, supervisors and technical officials as well as 2,500 domestic and foreign reporters. Most of the guests will stay in Hanoi; therefore, the city has prepared 31 hotels to serve them. Director of the Hanoi municipal Department of Tourism Dang Huong Giang said: “This will be an opportunity for Hanoi to welcome the largest number of international visitors in a short time since the outbreak of COVID-19”. On this occasion, the city will introduce a series of short tours and festivals to international guests.

Nam Dinh has been also preparing cultural, art and tourism activities, a fair with 30 pavilions to promote products under the One Commune – One Product programmes, a culinary festival, the introduction of Vietnamese worship of Mother Goddesses of the Three Realms, and documents and publications on transportation instructions and typical tourist sites.

Nam Dinh province has selected and trained 50 volunteers to serve the Games. Pham Thi Thuy Linh from the University of Economics – Technology for Industries in Nam Dinh said that all volunteers were required to speak in English and informed of the whereabouts and travel schedule of sports teams as well as the famous relic sites and landscapes in the province to introduce the beauty of the land and people of the locality to international friends.

Bac Giang province selected 77 volunteers, including many young civil servants. Phan Thi Viet from Bac Giang provincial Department of Foreign Affairs, a volunteer for SEA Games 31, said she tried to improve her English skills and learned about the previous editions of SEA Games and the culture of the Southeast Asian countries.

Senior Lieutenant Tran Quoc Bao from the department of Traffic Police under Hoa Binh Provincial Police, said: “This will be a chance for us to show off our skills towards creating beautiful images of the northern province during the days when the cycling race is held”.