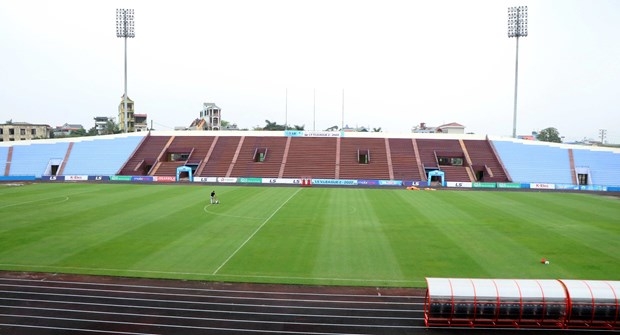 U23 Vietnam will meet Indonesian footballers in the opening match of Group A at the 20,000-seat Viet Tri Stadium, Phu Tho province, on May 6. (Photo: VNA)

NDO/VNA – Vietnam's U23 football team has been training hard in the northern mid-land province of Phu Tho, determined to keep the highest title at the 31st Southeast Asian Games (SEA Games 31).

During a training session on May 4, head coach Park Hang-seo reminded the players to focus on the training, which is crucial before matches.

Striker Tien Linh who was said to get injured and be racing against time to recover also joined the training. He, midfielder Nguyen Hoang Duc and captain Do Hung Dung are the three overaged players. Linh scored six goals at SEA Games 30 in the Philippines, helping U23 Vietnam bring home a gold medal.

Earlier the same day, the head coach announced the list of 20 U23 players who will defend the SEA Games title this month.

Players not on the list will be sent back to Hanoi and keep training as usual. They will be substitutes for the main team.

If there is any COVID-19 case in the main team, a maximum of 15 substitutes will be called up, as per the SEA Games football tournament regulation.

U23 Vietnam will meet Indonesian footballers in the opening match of Group A at the 20,000-seat Viet Tri Stadium, Phu Tho province, on May 6.

SEA Games 31, themed “For a Stronger South East Asia”, will be held in the capital city of Hanoi and 11 neighbouring provinces and cities.

Featuring 40 sports with 526 events, it is expected to attract around 10,000 participants. The biennial event was initially slated for late 2021 but delayed due to the COVID-19 pandemic.