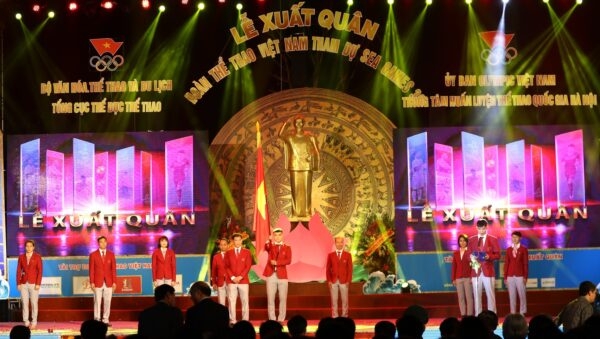 A ceremony is scheduled to be held on April 28 to see off the sports delegation of Vietnam to SEA Games 31 (Photo: sovhtt.hanoi.gov.vn)

NDO/VNA – A ceremony will be held on April 28 in Hanoi to see off the sports delegation of Vietnam to the upcoming 31st Southeast Asian Games (SEA Games 31) slated for May 12 – 23 in Hanoi.

The event aims to encourage the competitive spirit of the Vietnamese players, towards making the best performance and topping the medal tally at the event.

Deputy General Director of the Vietnam Sports Administration Tran Duc Phan, who is also head of the Vietnamese sports delegation, said the preparation for the send-off ceremony is being actively implemented and carefully reviewed.

According to the registered preliminary list, 965 athletes of Vietnam will compete in SEA Games 31 (534 men, 431 women).

All the 11 sports delegations attending the regional sports event will confirm the official registration of athletes at the Delegation Registration Meeting (DRM) in Hanoi on May 1-6, he added.

With a strong force participating in all the 40 sports at SEA Games 31, the Vietnamese delegation has set the goal to top the medal rankings with about 140 gold medals.