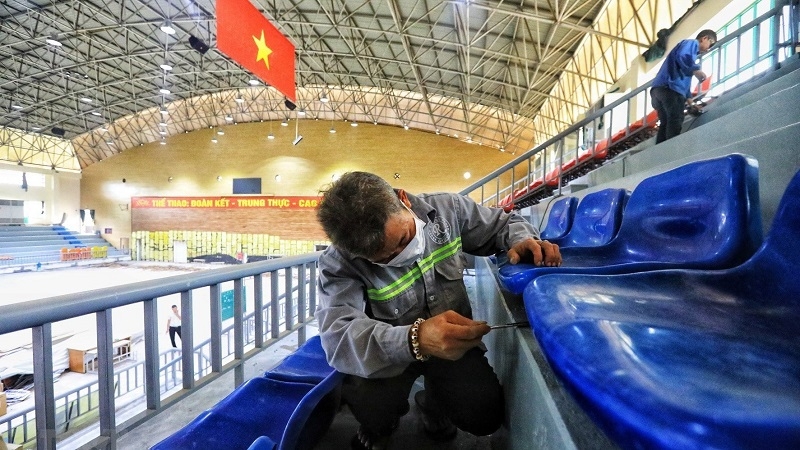 Workers are renovating a sport arena in Hanoi in the run-up to SEA Games. (Photo: VNA)

NDO/VNA - Hanoi is speeding up all-round preparations for the 31st Southeast Asian Games (SEA Games) as the event is only two and a half months away.

The Games is scheduled to take place in Hanoi and some nearby localities from May 12 to 23. The capital city will provide 15 venues for 18 sports.

The venues are all existing facilities, including 12 managed by the district-level People’s Committees and five by the municipal Department of Culture and Sports. Upgrades to most of the venues are being carried out on schedule.

From February 7 to 10, the Hanoi People’s Committee and the Ministry of Culture, Sports and Tourism sent a team to examine the 20 competition and training sites. They demanded prompt moves to complete the upgrades by March 15 to gear up for the inspection by the Southeast Asian Games Federation on March 18 - 19.

Over the past years, the city’s administration has issued short- and long-term training plans to supply the best coaches and athletes for the national teams at the 31st SEA Games.

Besides, the capital city has been working with the Ministry of Culture, Sports and Tourism to arrange the opening and closing ceremonies as well as others activities serving the Games.

It has also been striving to ensure logistics, transport, tourism, healthcare, and ICT services; coordinating with the ministries of public security and transport to guarantee security, safety, and smooth traffic for sports teams; decorating streets; and encouraging local residents to help promote Hanoi as an attractive, safe, and friendly destination.

The 31st SEA Games, themed “For a stronger South East Asia”, will run in Hanoi and 11 neighbouring localities. It will feature 40 sports with 526 events and expect to attract around 10,000 participants.

At the 30th SEA Games in 2019, Vietnam finished second in the overall medal tally, with 98 golds, 85 silvers and 105 bronzes, following hosts the Philippines.