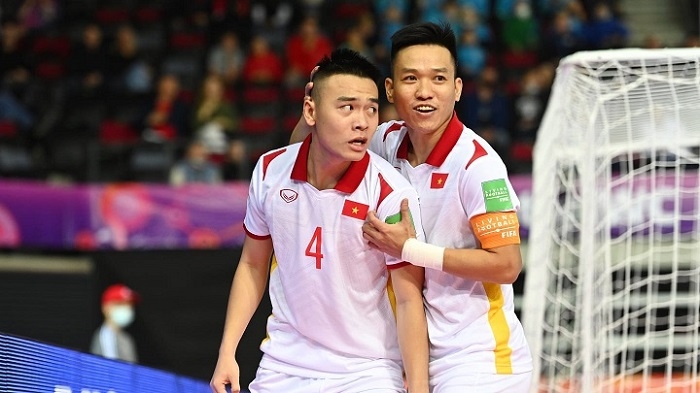 NDO – Vietnam boosted their hopes of advancing to the knockout stage of the FIFA Futsal World Cup 2021 with a nail-biting 3-2 victory over Panama in their second Group D match on Thursday night.

Vietnam headed into the match knowing that a win would be a must to rekindle their hopes of progressing to the last 16 following their opening 1-9 defeat against five-time champions Brazil.

Pham Minh Giang’s side proactively deployed attacks after the first whistle and needed only three minutes to go ahead, with Minh Tri firing an unstoppable shot from close range.

Nguyen Dac Huy missed a golden chance to double Vietnam’s lead in the ninth minute as his low shot failed to beat goleiro Hernandez in a one-on-one.

From a cornerkick situation seconds later, Chau Doan Phat took the ball and needed just two touches to make it 2-0 for Vietnam with a powerful strike at the far top corner.

Panama intensified attacks seeking to narrow the gap. Castrellon pulled back a goal with an unstoppable left-footed strike in the 11th minute.

Dac Huy wasted his second clear-cut chance in the penultimate minute of the first half again failing to beat the Panama goleiro.

Shortly before halftime, Panama were rewarded a 10m penalty after the Vietnamese side committed the full six fouls during the first half. Castrellon did not miss such a great opportunity to complete his double and level the score for the Central American team.

In the second half, Panama pressed to seek for a third goal. However, their ambition was dealt a big blow as Vietnam were the side to reach it first.

In the 26th minute, Van Hieu delivered an exceptional personal showing, leading the ball from the midfield through three Panama players and goleiro Hernandez before finishing off from a narrow angle to put Vietnam 3-2 in front.

With time running out, Panama deployed their power play hoping to produce another comeback, only to see their efforts in vain as Vietnam played resiliently and solidly to block all the attacking waves from their opponents.

Goleiro proved to be the hero of Vietnam in the remainder of the match with a series of smart saves to safeguard the net until the final whistle.

With the nail-biting 3-2 victory, Vietnam currently stand third in Group D but have climbed to second in the ranking of third-placed teams with three points, behind Egypt on goal difference.