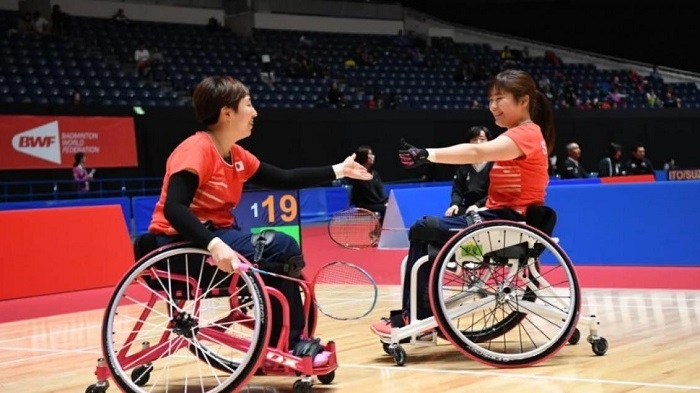 The opening of the first Para badminton tournament in the Paralympics is this Wednesday at Tokyo 2020. (Photo: JPBF)

Due to extreme weather, the women's individual W1 competition was scheduled for this Wednesday at the Yumenoshima Park. China's Chen Minyi targets her second gold in Tokyo, after winning the W1 mixed team competition. Liu Jing, also from the Chinese team, is another clear favourite.

There will be 14 finals on Wednesday, five in the morning and nine in the evening session.

In the BC3 Gold Medal Match, Grigorios Polychronidis (GRE) will meet Adam Peska (CZE). Grigorios took up boccia with the dream of participating in his home Paralympics at Athens 2004. That dream became a reality after he found himself in the quarter-finals of the individual BC3 event in Athens. But reaching the Paralympics was not the end goal.

Six finals will be held on the day. Watch out for Luca Mazzone (ITA), who will be taking part in his fifth Paralympics but second as a cyclist. He won Paralympic medals in swimming but his first golds came in cycling at Rio 2016, where he won the time trial and silver in the road race H2. He also helped Italy celebrate gold in the team relay, and the Italian is not slowing down, having won a pair of world titles in 2019.

The first day of the new month will see 15 medal events being conducted at the Tokyo Aquatics Centre.

Semi-finals in Men’s and Women’s Team competitions in most classes with the winners moving to the finals to play for gold or silver while the losers getting bronze medals. China is in the semis in five events and will face some competitions.

Semifinals will be played in women’s doubles with Dutch pair de Groot/van Koot favourite against Japan’s Kamiji/Ohtani. Medals will be decided in Men’s Quad Doubles.