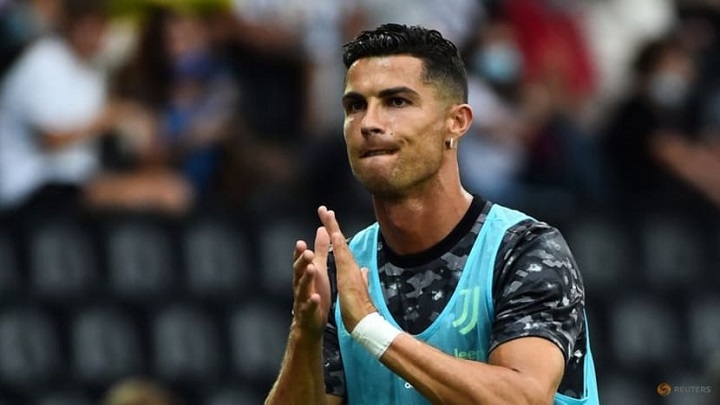 Cristiano Ronaldo completed a medical in Lisbon over the weekend ahead of his return to Manchester United and he has agreed personal terms on a two-year contract with the Premier League club, Sky Sports reported on Monday.

United said last week they had agreed a deal to re-sign Ronaldo from Juventus after he told the Serie A club he had no intention of staying, but the transfer was still subject to the agreement of personal terms and a medical. Sky reported the fee agreed for the 36-year-old Portuguese was around EUR15 million (US$17.70 million) plus a further EUR8 million in add-ons.

* Simona Halep, who missed three of the year's biggest events while recovering from a calf injury, delivered a statement win in her return to Grand Slam action as she beat Italian Camila Gorgi 6-4 7-6(3) on Monday to reach the US Open second round.

* World number seven Andrey Rublev made short work of veteran qualifier Ivo Karlovic in the US Open first round on Monday (Aug 30), beating the tricky Croatian 6-3 7-6 (3) 6-3 to set up a clash with Pedro Martinez.

* Former champion Marin Cilic of Croatia retired from his first-round match against German Philipp Kohlschreiber on Monday with an apparent injury, his earliest exit from the U.S. Open in 13 attempts. The 2014 winner had been up two sets but bowed out of the match early on in the fifth with Kohlschreiber leading 2-0, after struggling with his serve.

* Carla Suarez Navarro received a standing ovation at Flushing Meadows on Monday (Aug 30) after the fan favourite brought down the curtains on her Grand Slam singles career following her first round loss at the US Open. The 32-year-old Spaniard announced in September 2020 that she was being treated for early stage Hodgkin lymphoma and underwent several months of gruelling chemotherapy and radiotherapy before returning at the French Open in June.

* Former champion Sloane Stephens overcame best friend Madison Keys' aggressive play to secure a 6-3 1-6 7-6(7) win in the first round of the US Open on Monday (Aug 30).

* Brazilian authorities have abandoned plans to allow a crowd of 12,000 to watch Sunday’s World Cup qualifier with Argentina due to what the Brazilian Football Confederation (CBF) said was a lack of time to prepare. Earlier, the CBF had promised a 12,000 crowd would be the first step to the possible reopening of stadiums in Brazil after almost a year-and-a-half of games without fans due to the COVID-19 pandemic.

* Norwich City have signed centre back Ozan Kabak from German side Schalke 04 on a season-long loan with an option to make the deal permanent, the Premier League club said on Monday. The Turkey international spent the second half of last season on loan at Liverpool, making 13 appearances across the Premier League and Champions League.

* Everton striker Dominic Calvert-Lewin has withdrawn from the England squad for next month's World Cup qualifiers due to a thigh injury, the Premier League club said on Monday. The 24-year-old was last week named in manager Gareth Southgate's squad for qualifiers against Hungary, Andorra and Poland between Sept. 2-8.

* AC Milan have signed midfielder Tiemoue Bakayoko from Chelsea on a two-year loan with an option to make the move permanent, the clubs said on Monday. The 27-year-old Frenchman moved to Chelsea in 2017 but failed to establish himself as regular, spending much of his time out on loan including a previous stint at Milan during the 2018-19 season when he made 42 appearances in all competitions.

* Real Mallorca on Monday confirmed that Korean international Lee Kang-in had joined the club on a free transfer. Lee, who was released by Valencia on Sunday, has signed a four-year deal with the Balearic Island side.

* Bayern Munich have completed the signing of midfielder Marcel Sabitzer on a four-year contract from RB Leipzig, the Bundesliga clubs said on Monday. German media reported that Bayern paid a fee in the region of €16 million (US$18.9 million) for the Austria international.

* Atletico Madrid forward Luis Suarez will miss Uruguay's World Cup qualifiers next month because of a knee problem, the Spanish club said on Monday. Suarez, who scored in Sunday's 2-2 draw with Villarreal before being substituted, had been due to join up with his national team for games against Peru, Bolivia and Ecuador.

* Pakistan will allow spectators who are fully vaccinated against COVID-19 to attend their home limited-overs series against New Zealand starting next month, the country's cricket board said on Monday. The grounds will be full to 25% capacity.

* Manchester City defender Ruben Dias has signed a six-year contract extension until 2027, the Premier League club said on Monday. Dias, 24, joined City from Benfica last year and was a mainstay of Pep Guardiola's defence as he helped the club win the Premier League title and reach the Champions League final.

* The Czech Republic made four late changes to their squad for World Cup qualifiers against Belgium and Belarus, with key centre back Ondrej Kudela ruled out due to a knee injury, the Czech football federation said on Monday.

* Manchester United winger Amad Diallo has suffered a thigh injury and will be out for six weeks, putting his planned loan move to Dutch side Feyenoord on hold, the Premier League club said on Monday.