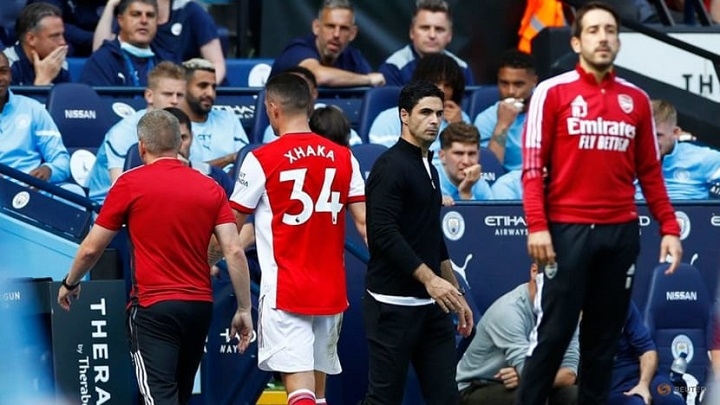 Arsenal's Granit Xhaka walks off the pitch after being shown a red card as manager Mikel Arteta looks on. (Photo: Reuters)

Manchester City made light work of thrashing a hapless 10-man Arsenal 5-0 in the Premier League on Saturday (Aug 28), a result that means the Gunners have lost their opening three league games of a season for the first time since 1954-55.

* Ten-man Chelsea held on for a 1-1 draw against Liverpool at Anfield on Saturday after defender Reece James was sent off just before halftime.

* Aston Villa and Brentford played out an entertaining 1-1 draw as the visiting promoted side continued their impressive start to the Premier League season at Villa Park on Saturday.

* Southampton's James Ward-Prowse scored a 96th-minute penalty to earn his side a dramatic 2-2 draw at Newcastle United on Saturday (Aug 28) - a result that leaves both teams still waiting for their first win of the season.

* New signing Demarai Gray scored his second goal in as many Premier League games for Everton and Dominic Calvert-Lewin netted a penalty as the Toffees continued their good start with a 2-0 win at Brighton & Hove Albion on Saturday.

* Leicester City's Marc Albrighton struck a 76th minute winner as the visitors condemned promoted Norwich City to a third straight defeat with a 2-1 win at Carrow Road on Saturday.

* Crystal Palace midfielder Conor Gallagher scored his side's first two league goals of the season as they held West Ham United to a 2-2 draw in an entertaining derby at the London Stadium on Saturday (Aug 28).

* Lacklustre Juventus began life without Cristiano Ronaldo by suffering a shock 1-0 defeat at home to promoted Empoli in Serie A on Saturday (Aug 28).

* Ciro Immobile's hat-trick inspired Lazio to a 6-1 thrashing of Spezia as the Rome club made it two wins from two at the start of the new Serie A season in style on Saturday.

* Bayern Munich's Robert Lewandowski continued his imperious form with a superb hat-trick as they cruised past Hertha Berlin with a 5-0 win at the Allianz Arena on Saturday. The Poland striker has scored at least once in each of his last 16 official matches for Bayern, bettering Gerd Mueller's record of netting in 15 consecutive games between 1969 and 1970.

* Real Madrid defender Dani Carvajal celebrated his return from a long injury lay off by firing his side to a 1-0 win at Real Betis in LaLiga on Saturday (Aug 28). Carvajal volleyed home a cross from Karim Benzema to break the deadlock in the 61st minute in his first start for Real since April after missing most of last season and the European Championship due to a series of injuries.

* Sevilla had to make do with a point as they were held to a 1-1 draw at Elche in LaLiga on Sunday, ending their 100per cent start to the season.

* Nice hammered Girondins de Bordeaux 4-0 to continue their fine start to the Ligue 1 season on Saturday a week after crowd trouble marred their previous outing.

* Pol Espargaro claimed his first pole position as a Repsol Honda rider after setting the fastest time in qualifying at the British Grand Prix at Silverstone on Saturday. The Spaniard topped qualifying ahead of Ducati's Francesco Bagnaia and Yamaha's world championship leader Fabio Quartararo.

* Red Bull's Max Verstappen mastered the rain to claim Belgian Grand Prix pole on Saturday(Aug 28), snatching the fastest time in qualifying from surprise package George Russell of Williams. Lewis Hamilton's Mercedes will start on the second row as he goes for his 100th Grand Prix win.

* West Ham United have signed France defender Kurt Zouma from Chelsea on a four-year contract, the two Premier League clubs announced on Saturday. Financial details of the deal were not disclosed but British media reported that West Ham would pay about 25 million pounds (US$34.42 million) for the 26-year-old centre back.

* RB Leipzig captain Marcel Sabitzer looks set to sign for defending Bundesliga champions Bayern Munich, who admitted Saturday (Aug 28) his potential transfer "could be a topic for us". The 27-year-old has been left out of the Leipzig squad for Sunday's Bundesliga match at fellow Champions League side Wolfsburg.

* Crystal Palace have signed midfielder Will Hughes from newly promoted Watford on a three-year-deal, the south London club announced on Saturday. Hughes spent the past four seasons at Watford, helping them to reach the FA Cup final in 2019 and making more than 100 appearances for the club.

* Formula One published a revised calendar for the remainder of the season on Saturday with the number of races dropping from a record 23 to 22, due to the COVID-19 pandemic. Several races had changed dates and one weekend in November was left subject to confirmation, amid media speculation it could be filled by a first grand prix in Qatar.

* Next season's British Grand Prix at Silverstone will be held on Aug. 5-7 instead of its traditional dates on the last weekend of August, MotoGP rights holders Dorna said on Saturday. The race, which was cancelled last year due to the COVID-19 pandemic, has returned to the MotoGP calendar this weekend.