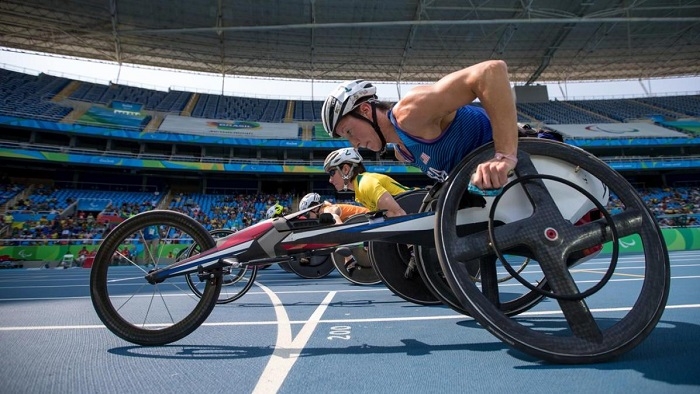 Winner of seven Paralympic gold medals, American Tatyana McFadden is one of the greatest female wheelchair racers of all time. (Photo: OIS)

Star athlete Tatyana McFadden and wheelchair tennis quad star Dylan Alcott start their participation in the Paralympics on Day 4 of the Tokyo 2020 Paralympic Games on August 28.

One of the best female wheelchair racers of all time, McFadden has 17 Paralympic medals to her name, including seven golds, since her debut at Athens 2004. She seeks to win at least five more in Tokyo to overtake Canadian legend Chantal Petitclerc as the female track & field athlete with more medals ever. She also holds 23 marathon titles and was one of the Para athletes featured in Netflix's ground-breaking Paralympic documentary Rising Phoenix.

Australia's Dylan Alcott is another athlete to watch. After successive gold and silver medals in wheelchair basketball, Dylan Alcott returned to his first love of wheelchair tennis in 2014 and won quad singles and doubles gold medals at Rio 2016. Now two-time ITF World Champion, Alcott won the inaugural Roland Garros and Wimbledon quad singles titles in 2019 to complete a career Grand Slam in singles and a calendar Grand Slam in doubles. He is now a 13-time Grand Slam singles champion and nine-time Grand Slam doubles champion.

Also known as the “Armless Archer” for his unique shooting style with his feet, Stutzman is one of the most well-known faces in Para archery. Most recently, the American was one of the athletes featured in Netflix's ground-breaking Paralympic documentary 'Rising Phoenix'. Stutzman won silver in the men’s individual compound at London 2012 but lost in the round of 16 at Rio 2016. He decided to take a break from the sport before returning with high hopes. Stutzman has taken part in multiple able-bodied competitions since Rio 2016 to improve his skills and took bronze at the 2019 Worlds after losing 144-142 in a close semifinal against teammate Ben Thompson.

The Mexican finished fifth in the 50m backstroke S5 at Rio 2016. Now competing in the S3, he set the world record in the 50m butterfly with a time of 54.02 at the Indianapolis 2019 World Series. Later that year at London 2019, he won two golds on the same day of a World Championships for the first time, winning the 50m freestyle and 150m individual medley. The 26-year-old will hope to translate his international form to a first Paralympic medal at Tokyo 2020.

Making his Games debut on home soil, Uda is currently ranked fourth in an ultra-competitive PTS4 class and is one of the strongest Para triathletes from Asia. Having competed on the World Triathlon scene since 2013, Uda has been working to get over the fourth-place hump for so long; he just missed the podiums at the 2019, 2018 and 2017 World Championships. But it has only made him hungrier. In May, Uda carried the Olympic Torch in Koka City as part of its tour of Japan in the run up to those Games.

After an intense year at the frontline of Spain’s COVID-19 response, hospital rehabilitation specialist Gacio made the decision to return to being a full-time athlete in September 2020. She finished fifth at Rio 2016 but went on from those Games to win back-to-back World titles in 2018 and 2020 and hopes to bring that to a Paralympic title in Tokyo in the women’s PTVI event. After the Games, Rodriguez is looking forward to getting to work with her new guide dog, Yellow, named after the famous Coldplay song.

The tallest Paralympian at Rio 2016 towering 2.46m will be out to ensure his country retains its Paralympic gold at Tokyo 2020. In 2018, Mehrzadselakjani helped Iran regain the world title after eight years in Arnhem, Netherlands, and they accounted for defending champions and long-time rivals Bosnia and Herzegovina 3-0 in the final. He was the second best spiker at Rio 2016 – his Paralympic debut - as Iran won its sixth Paralympic gold medal in sitting volleyball in the past eight Paralympic Games. Iran and Bosnia and Herzegovina have played in the past five Paralympic Games gold medal matches. Mehrzad, as he is known, continues to make an already strong Iranian team even better, with his highest block reach of 1.96m and highest spike reach of 2.30m creating plenty of headaches for opposition coaches. He took up sitting volleyball in 2011, when a coach spotted him on television and identified his raw potential, calling up Mehrzad to the national side in March 2016.

Beatrice ‘Bebe’ Vio is an icon of Para sport the world over. From the very start of her career in 2010 and on her subsequent World Cup debut in 2012 where she won her first silver in the women’s foil category B, she was destined to be a star. Selected as a torchbearer for the London 2012 Paralympics as she was too young to compete, Vio won her first European title in 2014 and followed up a year later with victory at the World Championships. She is now unbeaten in the foil in the last two editions of these competitions and has never finished outside the top three at World Cups. A strong advocate for a positive body image, Vio had both her legs amputated from the knee and her arms from the forearm in 2008 at the age of 11 after contracting severe meningitis. The 24-year-old uses special prosthetics to hold her weapon and maintain her position in her fencing wheelchair. Vio also starred in the groundbreaking Netflix documentary about the history of the Paralympic Movement in 2020 and regularly appears in magazines and on TV.

A protege of Canadian Paralympic bronze medallist Marco Dispaltro, Levine has blossomed to become one of the top female athletes in the mixed-gender sport. She is the first woman to reach the No.1 status in the BC4 category. Levine came close to fighting for a Paralympic medal in 2016 but lost in the quarterfinals. She has since made multiple podium finishes at various events. Her first major medal still eludes her, and there is no doubt she is going for two – individual and pairs BC4 – in Tokyo.

The Hong Kong (China) athlete finished fifth in the BC3 class at her Paralympic debut in Rio and has since been a consistent podium finisher at international competitions. She fell short in the finals of the 2017 Asia-Oceania Regional Championships, losing to the Republic of Korea’s Hansoo Kim in the last ball. She had a strong finish on the round robins of the 2018 Worlds but could not deliver in the playoffs. Still, the world No. 2 should not be overlooked, especially after a solid 2019 season that included an Asia-Oceania individual title.

Saengampa was close to double gold at Rio 2016, where he helped put Thailand atop the podium in the team BC1-2 event. But he could not repeat that joy in the individual BC2 gold medal match, falling shy to his veteran compatriot Watcharaphon Vongsa. However, the 2016 Paralympics seemed like a warm-up stage for the young athlete, who has shown tremendous growth. He captured the individual world title in 2018 and added a gold from the Asian Para Games later that year to sit at No.1 in the world.

One of Nigeria’s most decorated Paralympians is hoping to add to her medals tally in Tokyo. The five-time Paralympic medallist has won three golds and two silvers since her debut at Sydney 2000. The current world champion in the women’s up to 61kg might look to lift past her own world record of 142kg at Tokyo 2020.

‘The Judo Man’ of Mexico Sanchez is a triple Paralympic medallist from the men’s up to 81kg, including two golds from Beijing 2008 and Rio 2016. Sanchez’s profile in his country is not just down to his success on the mat. In 2017, he took part in a series of gruelling physical and mental challenges on reality TV show Exatlón where he reached national fame. Perhaps it was his experiences there that fuelled his return from a serious back injury in 2019 to win gold at a Tokyo 2020 qualifier. Sanchez plans to retire after Tokyo 2020 and will be hoping for the perfect end to his career.