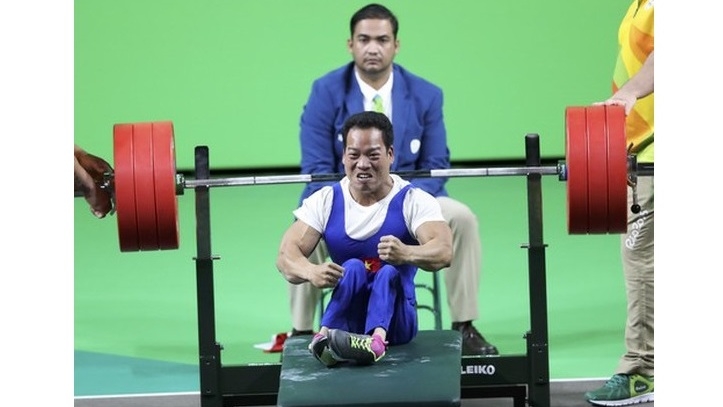 In powerlifting, defending champion Le Van Cong (R) will show his strength at the men’s 49kg.

Thirty medals will be awarded in cycling track, equestrian, powerlifting, swimming and wheelchair fencing on the second day of the Tokyo 2020 Paralympics on August 26.

The first gold medal will be decided in the men’s 49kg event and Vietnam’s Le Van Cong will be aiming to defend his title. However, Iraq’s Omar Qarada would be keen to better his medal colour, having claimed silver at the Rio 2016 Paralympic Games and Nur-Sultan 2019 World Championships.

Nigeria’s Yakubu Adesokan, a gold medallist at the London 2012 Paralympic Games in men's up to 48kg event, should put up a strong challenge as Lima 2019 Parapan American Games gold medallist Joao Maria Franca Junior from Brazil too in the mix.

The women's up to 41kg is expected to witness some record-breaking performances with Guo Lingling, China’s two-time world champion and the current world record holder, to be in action on the opening day.

While Lingling will be the clear favourite for the title, she is expected to find some competition from Ni Nengah Widiasih, Indonesia’s Rio 2016 bronze medallist; and Syria’s Noura Badour, the Nur-Sultan 2019 Worlds bronze.

In men’s C2 3000m individual pursuit, Belgium’s Ewoud Vromant will be up against China’s Liang Guihua. Vromant is the current world record holder while Guihua is the Paralympics Games record holder, having set the mark while winning gold at Rio 2016 and London 2012. On current form, Vromant look favourite, having lowered the world record to 3:36.322 from Guihua’s 3:42.916.

With 14 gold medals to be decided on Day 2, the focus at the Tokyo Aquatics Centre will be on Brazilian Para swimming legend Daniel Dias, who had in January announced that he will be quitting the sport after the 2020 Tokyo Paralympics to spend more time with his family. There will be a lot of interest in how many more medals will he be able to add to the 24 he has already bagged so far. Though Dias will start his campaign on Day 1 in men’s 200m freestyle his final campaign will take off on Day 2 with the 100m freestyle S5 in which he is the clear favourite.

The spotlight will be on men’s and women’s 200m individual medley SM6 with the men jumping into the pool first. Going in as favourite will be the Russian Paralympic Committee’s (RPC) Andrei Granichka, who is in top form coming into Tokyo.

Colombia’s Nelson Crispin is likely to be Granichka’s main rival. Crispin is the world champion from Mexico City 2017, as well as the bronze medallist from London 2019. Hongguang Jia from China is the second-fastest swimmer in 2021, only behind Granichka, following a great performance at the Berlin World Series in June.

In the women’s 200m Individual Medley, Great Britain’s Maisie Summers-Newton is the world record holder, reigning world champion, and Dublin 2018 European title holder and is likely to face some challenge from Ukraine’s Yelyzaveta Mereshko, the only Para swimmer faster than Summers-Newton this year.

Spanish star Teresa Perales will go into the pool in Tokyo for the first time on Thursday. She is the world record holder in the 100m freestyle S5, as well as the three-time Paralympic champion in the event. At the last Paralympic Games in Rio, she took silver behind China’s Zhang Li.

Four gold medals will be decided on Day 2 with men’s and Women’s Epee Individual -- Category A and B events.

Among the top contenders in women’s epee Category B, Saysunee Jana, Thailand’s first female Paralympic champion will go for her fifth consecutive podium finish at Tokyo 2020.

Debuting in 2004 with an incredible win in the women’s epee category B, Jana secured two gold medals and one silver and bronze medal in the weapon at Beijing 2008, London 2012, and Rio 2016.

When she was 17, Jana’s back was broken in a motorcycle accident while she made her way to work to support her family. She subsequently returned to education and attended a government-run institute for people with disabilities where she tried wheelchair sports, including fencing, and was motivated by the prize money to provide for her family.

Jovane Guissone, Brazil’s London 2012 men’s epee category B Paralympic champion has been his country’s top wheelchair fencer for more than ten years. Guissone is the regional titleholder in both the epee and foil and is unbeaten in the latter at the last three Americas Championships.

While he missed out on the podium at his home Paralympics in 2016, Guissone is motivated – and has the ability - to put the ghosts of five years ago to rest.

Preliminary round matches in wheelchair rugby will see Great Britain take on New Zealand while the United States meets Canada in another match.

Action will continue in equestrian with 3 finals on the schedule. All three are dressage individual test events in Grade 2, Grade 4 and Grade 5.

Watch out for Sanne Voets of Netherlands in Grade IV. The current reigning World and European team, individual and freestyle champion, she is on the brink of a record not achieved in two decades if she wins the same three titles at Tokyo. She has pretty much won everything she has entered in, since 2019 and looks primed to complete the triple-triple at Tokyo.