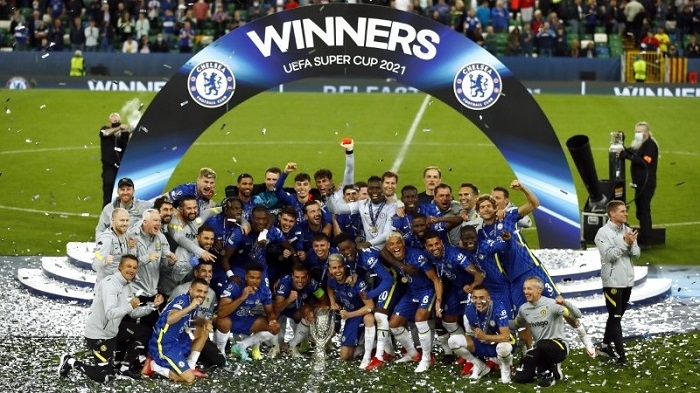 Extra time had ended 1-1 at Belfast's Windsor Park stadium, with Chelsea bringing on Kepa for Edouard Mendy in the final seconds in what turned out to be the game's tactical master-stroke. The freshest player on a field of tired legs saved first from Aissa Mandi at 1-1, after Kai Havertz had missed for Chelsea, and then made the winning stop at 6-5 when Villarreal captain and 2010 World Cup winner Raul Albiol hit the ball to the bottom left.

* Belgian international Romelu Lukaku arrived in London to complete what would be a club record signing by Chelsea for the Inter Milan striker, British and Italian media reported on Wednesday (August 11). The 28-year-old is set for a £97.5 million (US$135.26 million) move from Serie A to the Champions League holders.

* Manny Pacquiao said on Wednesday that Cuban Yordenis Ugas, who agreed to put his WBA welterweight championship belt on the line against the Filipino southpaw on short notice, is not to be underestimated. Pacquiao was preparing to fight WBC and IBF welterweight champion Errol Spence, Jr on Aug 21 in Las Vegas but a retinal tear forced the American to withdraw and on Tuesday Ugas was announced as Pacquiao's new opponent.

* Rafa Nadal's US Open preparations have suffered another setback after the Spaniard withdrew from next week's Cincinnati hardcourt event with a nagging foot issue, organisers of the Masters 1000 tournament said on Wednesday. Nadal suffered a shock exit last week in Washington, where he kicked off his lead-up to the US Open, and on Tuesday pulled out of the ongoing Masters 1000 event in Toronto with a left-foot issue.

* Crystal Palace said on Wednesday that US businessman John Textor has joined its board of directors and has also become the club's newest investor. The Guardian newspaper reported that Textor's investment of 87.5 million pounds (US$121.34 million) is believed to be a substantial percentage of the club, close to Chairman Steve Parish's 18% controlling stake.

* Japan's Kei Nishikori became the latest withdrawal from the ATP Masters 1000 tournament in Toronto on Wednesday with a shoulder injury. Nishikori, a finalist at the Canadian hard court stop in 2016, had been set to face seventh seed Hubert Hurkacz of Poland in a second-round clash on Wednesday but dropped out complaining of right shoulder pain.

* Britain's Justin Rose was named the recipient of the PGA Tour's Payne Stewart Award on Wednesday, which honours a player for his character, sportsmanship and a commitment to charity. Named after the three-time major champion Stewart, who died in a private plane crash in 1999, Rose will receive his award at a ceremony that will take place on Aug 31 in conjunction with the Tour Championship in Atlanta.

* Manchester City midfielder Phil Foden will be out of action for three to four weeks more, ruling him out of the start of the Premier League season, he said on Wednesday. The 21-year-old England international missed last month's European Championship final defeat by Italy on penalties and has been absent from City's pre-season training.