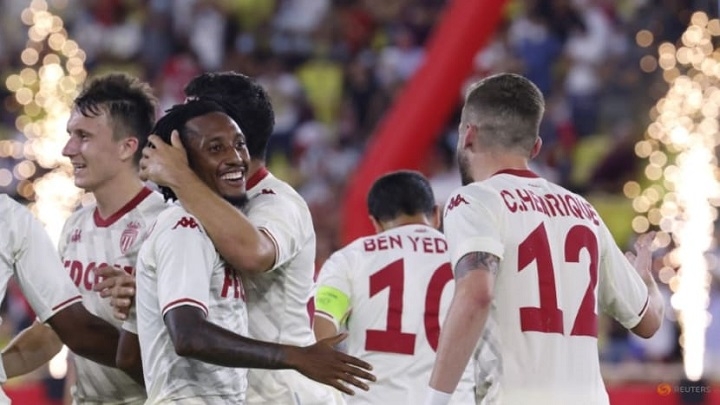 Monaco breezed into the Champions League playoff round with a 5-1 aggregate win over Sparta Prague on Tuesday as former winners PSV Einhoven and Benfica also advanced to set up a mouth-watering clash between the two for a group-stage berth.

Red Star Belgrade crashed out after a 1-0 reverse at Moldovan side Sheriff Tiraspol condemned the 1991 European Cup winners to a 2-1 defeat over two legs while Swedes Malmo knocked out Rangers 4-2 on aggregate.

* Brighton and Hove Albion signed Japanese midfielder Kaoru Mitoma on a four-year deal from J-League champions Kawasaki Frontale on Tuesday (Aug 10) and will loan him to Belgium's Royale Union Saint-Gilloise for the coming season. Mitoma, 24, was in the Japan squad at the Tokyo Olympics.

* Eintracht Frankfurt have signed Norway winger Jens Petter Hauge on loan from AC Milan, the German club announced on Tuesday. The 21-year-old joins the Bundesliga side on a temporary deal but the move could become permanent at the end of the 2021-22 season.

* The International Cricket Council (ICC) is preparing a bid for the game's inclusion in the 2028 Olympic Games in Los Angeles, the governing body said on Tuesday (Aug 10). Cricket last featured in the 1900 Olympics in Paris and has rarely been played in other multi-sport events, which many believe is essential for the game's growth outside the Commonwealth nations.

* Fans attending Premier League games are set to face random spot checks of their COVID-19 status at some stadiums in the opening weeks of the new season. Ticket holders should be prepared to provide proof of full vaccination or a negative lateral flow test result within 48 hours before the game via the NHS COVID Pass, the English Premier League said in a statement.

* Japan's Kei Nishikori is still riding high after reaching the quarter-finals at the Tokyo Olympics and said on Tuesday (Aug 10) he credits that deep run for his recent form in North America as he prepares for the US Open. Nishikori, who was Japan's last hope for a singles tennis medal in Tokyo, reached the semis last week in Washington and is now into the second round of the Masters 1000 event in Toronto after a 6-4 6-7(5) 6-2 win over Serbian Miomir Kecmanovic.

* World number four Rafael Nadal on Tuesday (Aug 10) said he had withdrawn from the Masters 1000 hardcourt event underway in Toronto due to persistent pain in his injured left foot. The injury kept the 20-time Grand Slam champion out of Wimbledon and the Tokyo Olympics this year and played a role in his shock third-round exit at the Washington Open last week.

* Welterweight champion Errol Spence Jr has been forced to withdraw from his Aug 21 fight against Manny Pacquiao due to a retinal tear in his left eye, organisers said on Tuesday (Aug 10). Cuban Yordenis Ugas, who won a bronze medal at the 2008 Beijing Olympics, has agreed to replace Spence in the main event at T-Mobile Arena in Las Vegas and defend his WBA welterweight belt against Pacquiao, who has won titles in eight divisions.

* Southampton have signed striker Adam Armstrong on a four-year contract from Championship Blackburn Rovers, the Premier League club said on Tuesday. British media reported the deal was worth around 15 million pounds (US$20.75 million).

* Brentford have signed Democratic Republic of Congo winger Yoane Wissa on a four-year contract from Ligue 1 side Lorient for an undisclosed fee, the promoted Premier League club said on Tuesday. Wissa, 24, made 128 appearances for Lorient, scoring 37 times and helping them win the French Ligue 2 title in 2020.

* The Premier League has introduced new measures to tackle discrimination in the game ahead of the new season, including permanent stadium bans for supporters, it said on Tuesday. All 20 clubs have agreed to enforce league-wide punishments, including bans, for individuals found to have behaved in an abusive manner towards any club employee, player, match official, steward or fan attending a game.

* Manchester City centre back John Stones has signed a new five-year contract with the club, the Premier League side announced on Tuesday. The 27-year-old made 22 league appearances last season as City won the title. He was also part of the England team that finished runners-up to Italy in the European Championship.