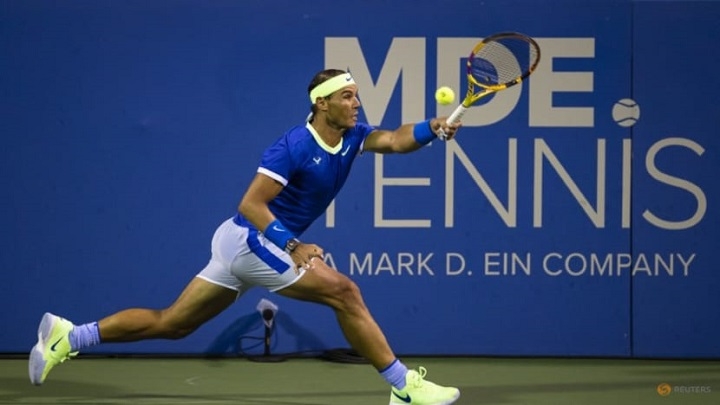 Rafa Nadal said on Sunday he had not yet fully recovered from a foot issue that kept him out of Wimbledon and the Tokyo Olympics but hopes a US Open tune-up event in Toronto will help him to regain confidence in his on-court movements.

Nadal's first event since his semi-final loss at the French Open ended in a shock third-round exit in Washington on Thursday and the Spaniard admitted his left foot was holding him back. He said that while he would like to taste victory before heading to the Aug 30-Sep 12 US Open his main focus is regaining confidence in his foot.

* Japan international striker Yuya Osako has joined Vissel Kobe, the J-League side announced on Sunday after signing the 31-year-old forward from German club Werder Bremen. Osako returns to Japan after seven-and-a-half seasons in Germany, where he also played for 1860 Munich and FC Koln.

* The Republic of Korea's Kim Si-woo had a forgettable day as he fired five balls into the water en route to an abysmal 13 on a par-three hole during the final round of the WGC-FedEx St. Jude Invitational in Memphis, Tennessee, on Sunday. According to the PGA Tour, Kim's 13 marks the highest score recorded at TPC Southwind and is also the highest on a par-three on the PGA Tour, outside of the four majors, since 1983.

* Pramac Racing's Jorge Martin fended off Suzuki's reigning world champion Joan Mir to seal his first MotoGP win on Sunday at the Styrian Grand Prix that was stopped and re-started after a fireball incident. Pole-sitter Martin faced immense pressure from Mir but finished 1.548 seconds ahead of the Suzuki rider to hand Pramac their maiden MotoGP win in his rookie season.

* Ligue 1 champions Lille fought back from two goals down to grind out a last-gasp 3-3 draw at 10-man Metz in their opening game of the season while Girondins Bordeaux suffered a 2-0 home defeat by top-tier debutants Clermont Foot on Sunday (Aug 8).

* Liverpool left back Andy Roberston is doubtful for the team's Premier League season opener away to Norwich next Saturday after picking up an ankle injury in Sunday's 1-1 draw with Athletic Bilbao in a friendly, manager Juergen Klopp said. Roberston limped off at the end of the first half of the match at Anfield as he attempted to block a cross and Klopp said the 27-year old defender would undergo a scan on Monday to assess the extent of the injury.

* Scotland's Grant Forrest produced a stunning finish to seal his first European Tour title at the Scottish Championship on Sunday. Forrest held off a fierce challenge from England's James Morrison to become the first home winner in Scotland on the circuit since Paul Lawrie in 2012.

* Stefanos Tsitsipas said on Sunday coaching during matches still takes place on the ATP Tour and that rules in place banning such instruction need to be changed. Tsitsipas, speaking in Toronto where he is the third seed for the Masters 1000 hardcourt event, feels there needs to be a way to allow communication between coaches and players that is not overly intrusive to the flow of a match.

* Manchester United defender Axel Tuanzebe has returned to Aston Villa on a season-long loan, both Premier League clubs announced on Sunday. Tuanzebe returns to Villa after helping the Midlands club secure promotion to the top flight while on loan in 2019.

* Barcelona on Sunday confirmed that new signing Sergio Aguero has picked up a calf injury. While the club did not say how long the Argentine would be out for, local media reports say he is a doubt for next week's La Liga season opener away to Real Sociedad.

* The Swiss Football Association will name former player Murat Yakin as the national team's new coach on Monday, Swiss newspapers reported on Sunday. Yakin, who played for the national team 49 times, will replace Vladimir Petkovic, who has joined French side Bordeaux, after guiding the 'Nati' to the last eight of the Euro 2020 tournament, Nau.ch reported.

* Leicester City defender Wesley Fofana will undergo surgery on his broken leg and has been ruled out until 2022, manager Brendan Rodgers said. Frenchman Fofana suffered a fractured fibula in a pre-season friendly against Europa League winners Villarreal earlier this week.

* Fortaleza scored in injury time to beat Brazilian league leaders Palmeiras 3-2 on Saturday and confirm their title credentials in a thrilling match in Sao Paulo. The win lifts Fortaleza to within two points of Palmeiras at the top of the Serie A.

* Australia's National Rugby League will consider holding this year's Grand Final in New Zealand for the first time if fans are not allowed back into games elsewhere before the end of the season. Pandemic restrictions have caused havoc with the NRL schedule since several states went into lockdown last month to suppress COVID-19 outbreaks.