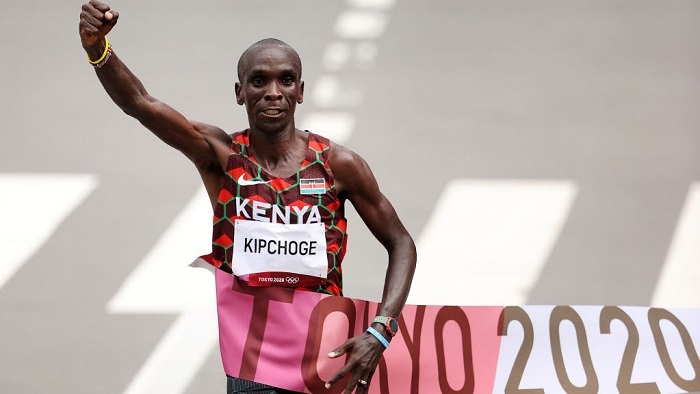 Kenya’s Eliud Kipchoge delivered a masterclass in running to retain the Olympic title in the men’s marathon at the Olympic Games Tokyo 2020.

Kipchoge crossed the finish line in Sapporo Odori Park first in 2:08:38, which was faster than the time he ran at the Olympic Games in Rio in 2016.

The Kenyan runner was one minute and 20 seconds ahead of the next closest finisher.

The race for the silver and bronze came down to a sprint finish.

Abdi Nageeye of the Netherlands outsprinted Belgium’s Bashir Abdi and Cherono Lawrence of Kenya to claim the silver in a time of 2:09:58.

Bashir finished two seconds later, in 2:10:00, for the bronze. Lawrence was a further two seconds adrift in fourth.

The Russian Olympic Committee (ROC) dominate both events – the individual all-around and the group competitions – taking five successive Olympic golds from Sydney 2000 to Rio 2016, so they will be the team to beat.

Countries hoping to make it onto the medal rostrum include Italy and Israel who qualified in third and fourth, respectively, in Saturday's qualification.

Indoor volleyball has reached the business end at Tokyo 2020 and the bronze (Republic of Korea v. Serbia) and gold-medal matches (USA v. Brazil) will take place on Sunday (August 8).

After two weeks of fierce competition on the court it's the women who take centre-stage in volleyball as podium spots are at stake, with both gold and bronze-medal matches on the docket.

First up, the bronze match-up from 9:00 local time sees Republic of Korea and Serbia in action, then an evening clash for gold, from 13:30 local, between powerhouses USA and Brazil.

Wakimoto Yuta, who won silver at the 2020 world championships, will be carrying the hope of the host nation when he sets off in the keirin, which is one of the most popular races at the Games. He will go up against a strong field which includes defending champion Jason Kenny of Great Britain. Rio 2016 bronze medallist Azizulhasni Awang will be aiming to become Malaysia’s first gold medallist at the Olympic Games.

In the women’s omnium, Great Britain’s most decorated female cyclist Laura Kenny will be looking to successfully defend her title.

Boxing: Four finals on last day of boxing action at the Kokugikan

The finals action will come thick and fast at the Kokugikan Arena on August 8, the final day of an enthralling Tokyo 2020 Olympic Boxing Competition, with no fewer than four finals decided in the rings.

Victory ceremonies will follow each final event of the day at the Kokugikan Arena.

After grinding through the preliminary rounds, Kellie Anne Harrington of Ireland and Brazilian fighter Beatriz Ferreira are worthy finalists in the women's lightweight division. In the men's lightweight final, US boxer Keyshawn Davis and Andy Cruz of Cuba will be exchanging blows for Olympic gold.

In the day's other finals, Great Britain’s Lauren Price and Li Qian of China are in action in the women's middleweight category, while the men's super heavyweight final will be contested by Uzbekistan’s Bakhodir Jalolov and Richard Torrez Jnr of the United States.

Basketball at the Tokyo 2020 Olympic Games comes to a close with the final event on the schedule: the women's gold medal game.

Eight-time Olympic champions, the United States, are favoured to add a seventh consecutive gold medal to their already historic portfolio, though they will still face a challenge in hosts Japan who are vying for a first-ever Olympic gold medal in the women's basketball.

The US will be looking to defend their title from Rio 2016 and a possible ninth title overall, while Japan will be hoping to clinch the victory on home court.