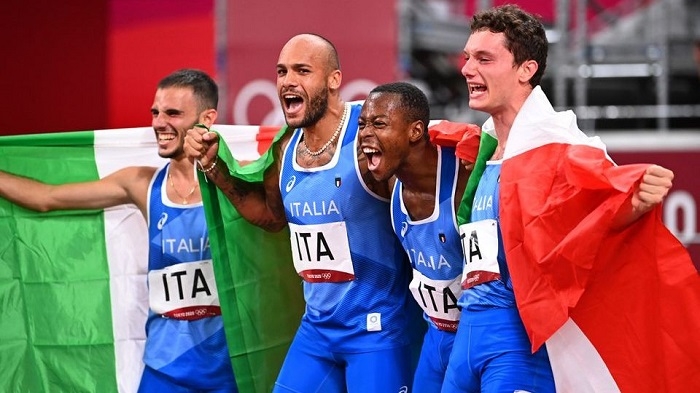 Scorching Italian men and dominant Jamaican women continued their country's golden storylines at the Tokyo Olympics on Friday. Here's what you need to know about the Tokyo Games:

Lead-off runner Patta handed the baton to Jacobs, who produced a storming run down the back end, with Tortu on the anchor leg crossed the line in a new Italian record of 37.50 seconds.

Jacobs will bow out of the Games as a double Olympic gold medallist in the sprint events while Canadian sensation Andre de Grasse won his third medal at Tokyo 2020.

De Grasse opened his campaign at the Games with a bronze medal in the 100m final before being crowned Olympic 200m champion.

The Jamaican women underlined their sprinting dominance with a gold in the 4x100 metres relay.

Jamaica stormed home to their first Olympic women's 4x100m title in 17 years, taking gold in a national record time of 41.02 at the Olympic Stadium.

What made the win even more special is that back in Jamaica it was Independence Day. 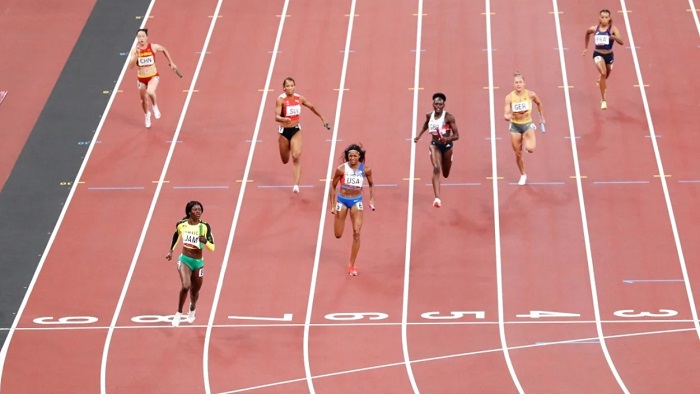 Shericka Jackson of Team Jamaica crosses the finish line to win the gold medal in the Women's 4 x 100m Relay Final on day fourteen of the Tokyo 2020 Olympic Games at Olympic Stadium in Tokyo, Japan on August 6, 2021. (Photo: Getty Images)

Williams got Jamaica off to a blistering start before Thompson-Herah flew down the back-stretch passing the baton to Fraser-Pryce, who maintained their lead. Jackson powered down the home straight to cross the line ahead of reigning Olympic champions the United States in the second-fastest time in history.

The 29-year-old also became just the fifth woman to win at least three track and field gold medals in the same Olympic Games and the first since American Allyson Felix at London 2012.

Kenya's Faith Kipyegon retained her Olympic title in the women's 1,500 metres at the Olympic Stadium on Friday, breaking the Olympic record as she denied Dutchwoman Sifan Hassan her dream of winning an unprecedented Olympic treble.

Laura Kenny became the most decorated female Olympic cyclist in history with a fifth gold, destroying the field in the first women's madison event at a Games.

American Allyson Felix's bronze in the 400 metres made her the most decorated woman in Olympic track and field history, edging ahead of Jamaica's Merlene Ottey.

After day fourteen of the Tokyo 2020 Olympic Games, China still lead the medal tally with 36 gold, 26 silver and 17 bronze medals, while the US are in second with 31 gold, 36 silver and 31 bronze medals. Host Japan maintained their third place after collecting golds in karate and wrestling for a total of 24 golds, 11 silvers and 16 bronzes.