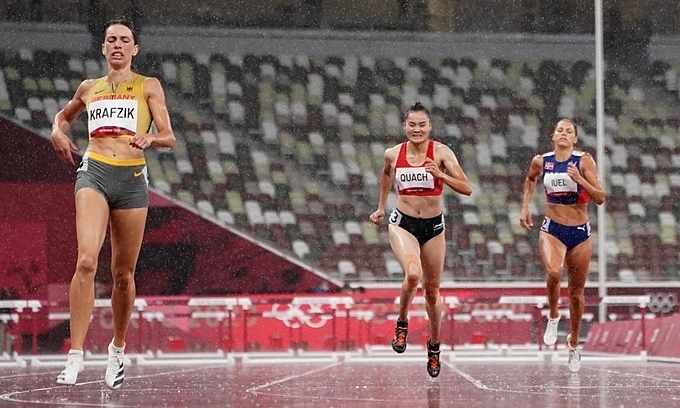 Quach Thi Lan, the last Vietnamese athlete still in the Olympics, ended her journey in Tokyo after finishing 6th out of eight runners in the 400m hurdles first semi-final on August 2.

Under heavy rain, Lan finished with a time of 56.78 seconds. This is 1.07 seconds and 1.48 seconds less than her previous performance in Heat 3 of the qualifiers and her personal best, respectively.

Despite being defeated, Quach Thi Lan’s journey will be one to remember. She had the best performance in the history of Vietnamese athletics.

Of 40 athletes, Lan was the only athlete to compete in the Tokyo Olympics through a wildcard entry and the only unranked athlete in the top 24 best runners in the semi-finals.

The Vietnamese sports contingent ended their journey at Tokyo 2020 without winning a medal.

China won its sixth and seventh gold medals in weightlifting on August 2, matching Russia's record from the 1976 Games, as Li Wenwen and Wang Zhouyu triumphed in the women's heaviest weight categories at Tokyo 2020.

The 21-year-old Li had a dominant lead in the +87kg event, lifting 320kg in total to set an Olympic record, while Wang won the women's 87kg class with a combined weight of 270kg.

Despite their defeat in both badminton finals, China still collected five more gold medals in other sports today, thereby extending their leading position in the medal tally with a total of 29 gold, 17 silver and 16 bronze medals.

The US are in second with 22 gold, 25 silver and 17 bronze medals, after collecting two more golds today.

Hosts Japan, Australia and the Russian Olympic Committee (ROC) did not win any more gold, while the Cuban sports delegation won their first two gold medals, both in wrestling.

Indonesia had a successful day, winning one gold and one bronze in badminton.

Netherlands' Sifan Hassan unleashed her sizzling pace in the final lap to win the women's 5,000 metres gold medal on Monday and kick off her bid for an unprecedented Olympic treble

Canada stunned world champions the United States on Monday, handing them a shock 1-0 defeat in the semi-finals of the women's Olympic football tournament to set up a clash with Sweden in Friday's showpiece match.

The Swedes beat Australia 1-0 thanks to a 46th-minute goal from Fridolina Rolfo to return to the final after their silver medal in Rio five years ago.