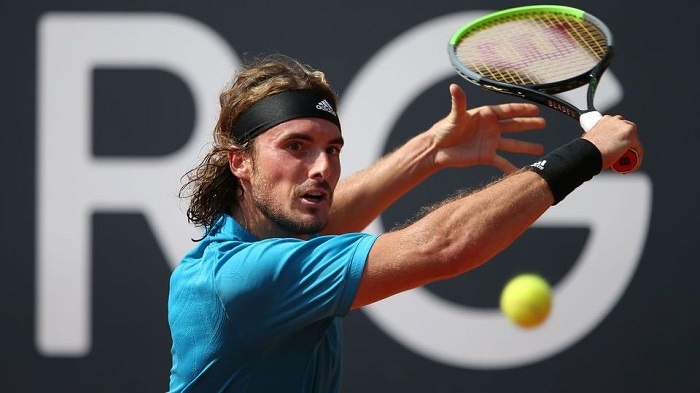 No. 6 seed Filip Krajinovic of Serbia knocked out top-seeded Greek Stefanos Tsitsipas 3-6, 6-1, 6-3 Friday (July 16) in the quarterfinals of the Hamburg European Open in Germany.

* No. 7 seed Jordan Thompson of Australia and Jenson Brooksby of the US reached the semifinals Friday at Newport, R.I. Thompson defeated American Maxime Cressy 6-3, 7-6 (6). Brooksby cruised past Peter Gojowczyk of Germany 6-0, 6-3.

* Former champion Louis Oosthuizen chased down American pace-setter Collin Morikawa then turned on the afterburners to take a two-stroke halfway lead at the British Open with a sizzling five-under 65 under cloudless skies on Friday. Open debutant Morikawa heads into the weekend on nine under with Jordan Spieth, the 2017 champion, in third place on eight under after a round of 67.

* Formula One champions Mercedes are aiming to decide Lewis Hamilton's 2022 team mate before the Belgian Grand Prix at Spa at the end of August, team boss Toto Wolff said on Friday. The choice is effectively between continuing with Finnish incumbent Valtteri Bottas or promoting 23-year-old Mercedes-contracted British driver George Russell from struggling Williams.

* The next four Champions League finals from 2022-2025 will be hosted by St Petersburg, Istanbul, London and Munich respectively, European soccer's governing body UEFA said on Friday. Next year's Europa league final will be played in Seville, with Budapest set to host the 2023 title decider for the second-tier European club tournament.

* Slovenian Matej Mohoric gave Bahrain Victorious something to cheer with his second stage win in this year's Tour de France. Mohoric, who had already prevailed in the seventh stage in Le Creusot, attacked from the breakaway to wrap up a solo victory on the 19th stage, a 207-km ride from Mourenx, virtually zipping his mouth shut as he crossed the line.

* New Tottenham Hotspur manager Nuno Espirito Santo fired a hands-off warning to clubs interested in signing Harry Kane, saying on Friday the England striker was crucial to the Premier League club's ambitions next season. Reports in May said Kane, who has a contract with the north London club until 2024, had informed Spurs of his desire to leave this summer after another trophy-less campaign.

* Serie A club Spezia have been banned from four transfer windows, starting in January next year, after breaching FIFA rules on signing minors, world soccer's governing body said on Friday.

* Attacking midfielder Felipe Anderson has rejoined Lazio from West Ham United on a permanent deal, the Premier League side announced on Friday , as he returns to the Serie A club after three years. Anderson signed for West Ham in 2018 for a club record fee of 35 million pounds (US$48 million) and scored 12 goals in 73 appearances across all competitions.

* Asian champions Ulsan Hyundai have signed the Republic of Korea international Yun Il-lok on a free transfer from French side Montpellier. Ulsan announced the deal for the 29-year-old on their official social media accounts as coach Hong Myung-bo bolsters his squad ahead of the knockout rounds of the continental club championship.

* Kyogo Furuhashi will leave Vissel Kobe to join Celtic after the J-League club said they had reached an agreement to transfer the Japan winger to the Scottish Premiership side. Furuhashi will join a Celtic side led by former Yokohama F Marinos head coach Ange Postecoglou, who moved to Scotland last month having led the Marinos to the J-League title in 2019.