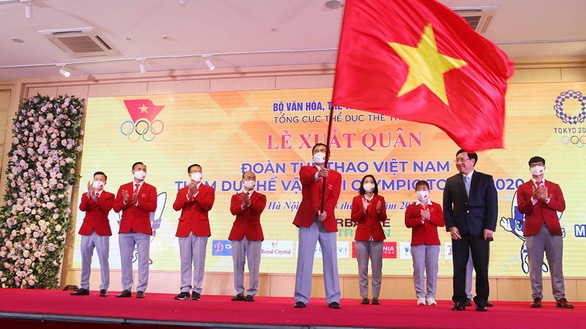 NDO – The Vietnam Olympic Committee held a ceremony in Hanoi on July 13 evening to send off the Vietnamese sport contingent ahead of the Tokyo 2020 Olympic Games.

The event saw the presence of Politburo member and Deputy Prime Minister Pham Binh Minh, as well as all the 43 members of the delegation, comprised of 18 athletes, 18 trainers and experts, two doctors, four officials, and one reporter.

“Each member of the contingent must be an ambassador of goodwill and sincerity in order to promote the image of a peaceful and friendly Vietnam with wonderful cultural traditions to international friends through the Olympic arena,” he said.

Politburo member Minh voiced his belief that with members’ serious and careful preparations, strong determination and great efforts, the Vietnamese contingent will achieve the best results at the upcoming Tokyo 2020 Games. He wished them all the best and great success. 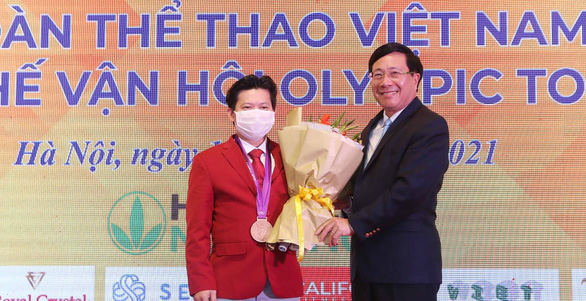 At the send-off ceremony, the Vietnam Olympic Committee presented the London 2012 Olympic bronze medal to Vietnamese weightlifter Tran Le Quoc Toan. Earlier, the International Olympic Committee confirmed that Azerbaijan’s Valentin Hristov had been stripped of his bronze medal for doping. Therefore, Quoc Toan, ranked fourth at the Games, was promoted to receive the honour.

As planned, the Vietnamese Olympic contingent, headed by Deputy Director of the General Department of Sports and Physical Training Tran Duc Phan, will depart for Tokyo on July 18, targeting to win medals at the Games.

Delegates pose with members of the Vietnamese Olympic contingent.

Five years ago, Vietnam ranked 45th in the medal table at the Rio 2016 Olympics in Brazil with one gold and one silver, both won by shooter Hoang Xuan Vinh.