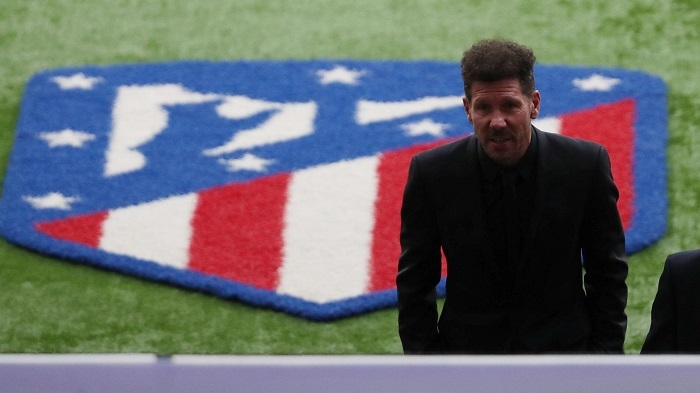 Atletico Madrid coach Diego Simeone has prolonged his stay with a three-year contract extension after leading them to a second La Liga title under his tenure, the club said on Thursday.

Simeone, who took over Atletico in 2011, has won eight trophies so far in the Spanish capital -- more than any other manager in the club’s history.

* Former world number one Karolina Pliskova reached her maiden Wimbledon final after coming back from a set down to beat second seed Aryna Sabalenka of Belarus 5-7 6-4 6-4 on Thursday.

* Nick Kyrgios will not represent Australia at this year’s Olympics in Tokyo because he does not want to compete if there are no fans in the stands, he said on Thursday. The Olympics will take place without spectators in host city Tokyo, organisers announced on the same day.

* Barcelona must considerably reduce their wage bill in order to keep Lionel Messi, La Liga chief Javier Tebas said on Thursday, adding that the club would not be shown any leniency when it comes to obeying the league's strict financial control rules.

* German Nils Politt won the 12th stage of the Tour de France, a 159.4-km ride from Saint-Paul-Trois-Chateaux, on Thursday to claim the biggest win of his career. The 27-year-old rider prevailed from the day’s breakaway, making his decisive attack 11.8 km from the line.

* American Kevin Na has withdrawn from next week's British Open due to international travel requirements, organisers the Royal and Ancient said on Thursday. The British Open, cancelled last year because of the COVID-19 pandemic, will take place at Royal St George's in Sandwich on the Kent coast from July 15-18.

* Britain will send its largest ever team for an overseas Olympics to the Tokyo Games, the British Olympic Association (BOA) said on Thursday, with more female than male athletes for the first time. Despite Tokyo organisers announcing on Thursday that the Games will take place mostly without fans due to the continuing COVID-19 restrictions in Tokyo, the BOA said 376 athletes were bound for Japan with a further 22 reserves.

* Russia have sacked manager Stanislav Cherchesov after they finished bottom of their group at the European Championship, the country's governing Football Union said on Thursday.

* World number three Rafa Nadal will return to action for the first time in more than a month at the Citi Open in Washington, organisers said on Thursday, as the Spaniard looks to put his French Open semi-final defeat by Novak Djokovic behind him.

* England's Euro 2020 semi-final victory over Denmark on Wednesday was watched by a peak of 27.6 million people, setting a new record for a football match shown on a single British channel, broadcaster ITV said. The figure, calculated across TV and smart devices including phones and laptops, beat the 27.5 million who watched England's defeat by Croatia in the 2018 World Cup, a match also broadcast by ITV, it said.

* England may have narrowly beaten Denmark 2-1 in extra time in their European Championship semi-final match at Wembley on Wednesday but statistics show the home side dominated proceedings and set a tournament record for touches in the box. England had 56 touches in Denmark's penalty area - a record since data has been available for the metric since 1980, data firm Opta said.

* Paris St Germain have signed Spain defender Sergio Ramos on a free transfer after he left La Liga club Real Madrid, the French Ligue 1 side announced on Thursday. Ramos left Real last month after failing to reach an agreement to extend his 16-year stay in the Spanish capital.

Today, 11:04
Phuong Uyen Tran Everyone Has a Home to Turn to in Difficult Times