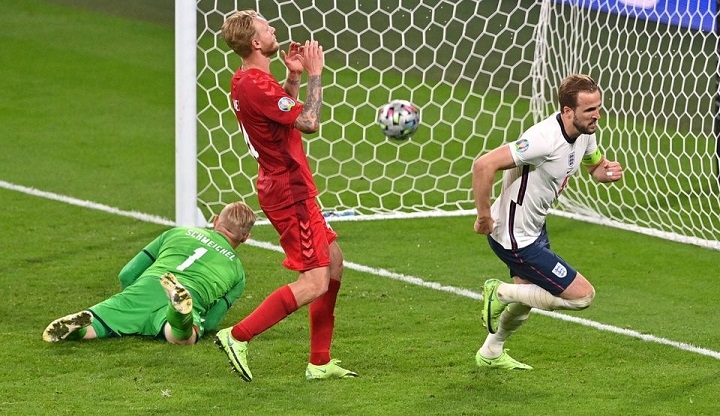 England won their first semi-final since the 1966 World Cup as Harry Kane's extra-time goal, following up after his penalty had been saved, earned a 2-1 win over battling Denmark on Wednesday that sent them into Sunday's Euro 2020 final against Italy.

On a night to remember in front of almost 60,000 fans, most of them delirious with joy, England reached the European Championship final for the first time, though they had to come from behind as a Simon Kjaer own goal cancelled out Mikkel Damsgaard's superb free kick for the Danes in the first half.

The home side were on top throughout but struggled to break down the Danish defence, until they were awarded a penalty in the 103rd-minute after Raheem Sterling went down with minimal contact to allow captain Kane to decide it.

It was of course a special night for coach Gareth Southgate, whose penalty shoot-out miss sent England out of the semi-finals of Euro 96. "We said to the players at some point we're going to have to show resilience and come back from setbacks, and we did that tonight," he said.

"The most pleasing thing is that we've given our fans and our nation a fantastic night and the journey carries on for another four days. We've said we want to create memories I've said to the young ones 'it isn't always like this'."

It was a tough way for Denmark to end their emotional ride from the fear and distress of Christian Eriksen’s opening game collapse to their first semi-final since their shock Euro 92 win, but their exhausted players left Wembley with socks rolled down but heads held high. 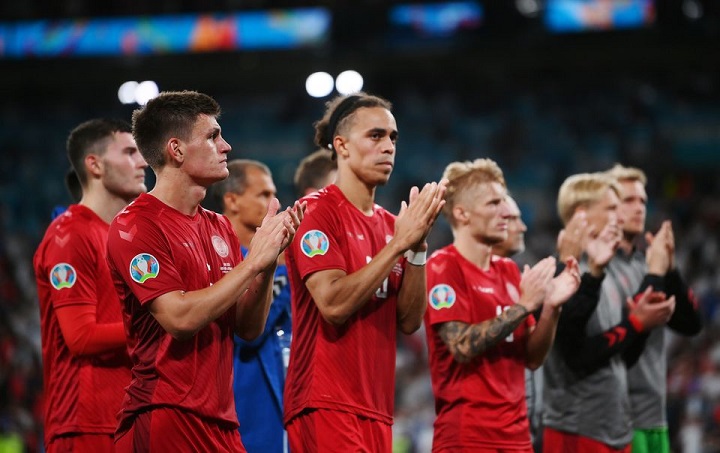 Denmark's Joakim Maehle and Yussuf Poulsen with teammates applaud the fans after the match. (Photo: Reuters)

"I am proud of this group and everyone who has been on this journey. It has been fantastic to be involved. I am hungry and empty, but I am also proud," said Pierre-Emile Hojbjerg.

England had reached the semis without conceding a goal and it needed something special to pierce their rearguard as Damsgaard fired a powerful, dipping 25-yard free kick over the wall and beyond the diving Jordan Pickford -- the tournament's first goal direct from a free kick -- after 30 minutes.

The crowd were stunned, that had not been in the script, and the question of how England would respond to their first real setback would now be addressed.

The answer was calmly and patiently, as they passed their way back into the ascendancy. Sterling was denied at point-blank range by Kasper Schmeichel before the 39th-minute equaliser, when Bukayo Saka hit the byline and fizzed over a low cross that Kjaer bundled over his own line in his attempt to stop the ball reaching Sterling.

Schmeichel was on hand again with an excellent diving save to palm away a Harry Maguire header and England began to turn the screw in the second half, but, despite their relentless passing and probing around the box, they struggled to carve out a clear opening and the match rolled into extra time.

Sterling continued to drive into the box and was eventually brought down by Joakim Maehle for the VAR-reviewed penalty that Kane struck poorly and Schmeichel blocked, only for the captain to tuck home the rebound. 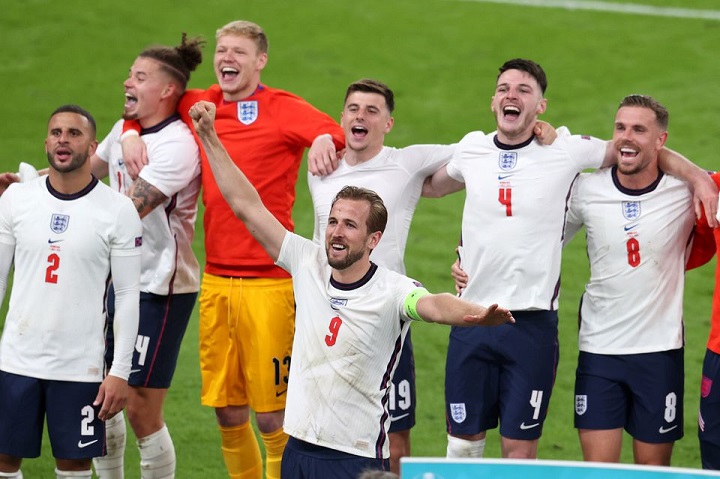 England then had to negotiate the last 15 minutes and managed it to spark the loudest, and surely most confident rendition of "Football's Coming Home", ever to ring around Wembley.

They still face a monumental final hurdle if they are to match the boys of '66 and end the now-55 years of hurt but they will take on Italy with total belief that they can do so.