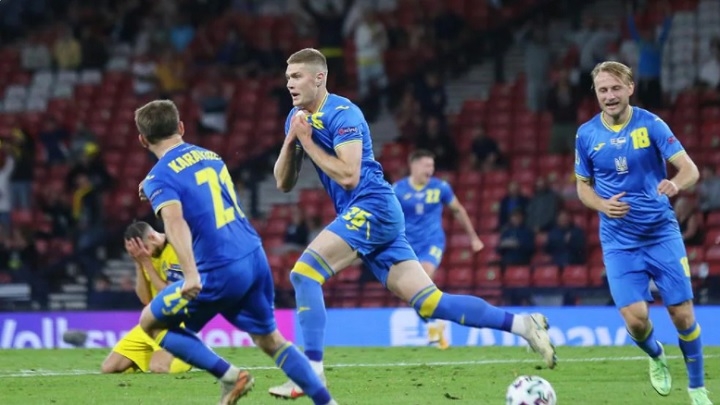 Artem Dovbyk netted a dramatic winner in stoppage time at the end of extra time as Ukraine squeezed past 10-man Sweden 2-1 at Hampden Park on Tuesday to book a Euro 2020 quarter-final clash with England.

The final whistle was met with wild scenes of celebration as Ukraine reached the last eight of a major tournament for only the second time, after they made the quarters at the 2006 World Cup.

The two sides were level at 1-1 after 90 minutes following goals from Oleksandr Zinchenko and Sweden’s in-form Emil Forsberg but the tide changed when Sweden defender Marcus Danielson was sent off nine minutes into extra time.

Sweden looked resigned to taking the game to penalties, but Dovbyk had other ideas, meeting Zinchenko’s cross in the 121st minute to settle the contest and send Ukraine into uncharted European Championship territory.

England, who were shocked by Iceland in the knockout stage of the last European Championship five years ago, will be firm favourites against Andriy Shevchenko’s side in Rome on Saturday.

But having never given up against a Sweden team that came into their last-16 clash unbeaten from the group stage, where they finished above Spain, the determined Ukrainians will be no pushovers.

“Both teams played very well," Shevchenko told a news conference. “It was an interesting match.

“Neither side wanted to lose so we got this drama at the end. With this performance and commitment, our team has deserved the love of the whole country."

A small contingent of Ukraine supporters were at Hampden to witness their side’s first-ever appearance in a European Championship knockout round, and the team nearly got off to a dream start as Roman Yaremchuk was denied by a smart Robin Olsen save. 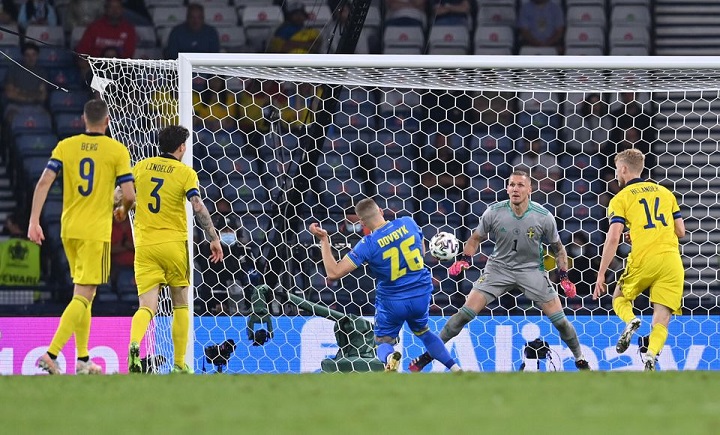 Sweden were causing problems in an entertaining opening too, but it was Ukraine who edged in front, with Manchester City’s Zinchenko hammering home after 27 minutes having been picked out by a sumptuous Andriy Yarmolenko pass with the outside of his boot

Having fallen behind in the tournament for the first time, Sweden looked short of ideas and needed a slice of luck to get themselves back into the game, with Forsberg’s speculative strike taking a huge deflection before finding the net just before halftime.

Forsberg, who now has four goals in the tournament, one behind leading scorer Cristiano Ronaldo, then followed Ukraine’s Serhiy Sydorchuk in hitting the woodwork after the break, not once but twice.

Only Zlatan Ibrahimovic has scored more than Forsberg in Euro finals history for Sweden, and without the RB Leipzig forward’s goals — two in the decisive 3-2 victory over Poland and the winner against Slovakia — Sweden would have won just one point in the group stage.

But he, like the rest of his team mates tired, and with neither side able to find a winner, extra time followed.

Sweden’s task was then made all the more difficult as Danielson was sent off for a high and dangerous tackle on Artem Besedin, following a VAR review.

Another last-16 penalty shootout seemed inevitable, following the drama of world champions France’s exit on Monday, but Ukraine had one final attack in them, with Dovbyk stealing the headlines.

His goal was the second-latest in European Championship history, behind Turkey’s Semih Senturk in 2008, and the latest match-winning strike in the competition, with his effort likely to go down in Ukrainian footballing folklore.