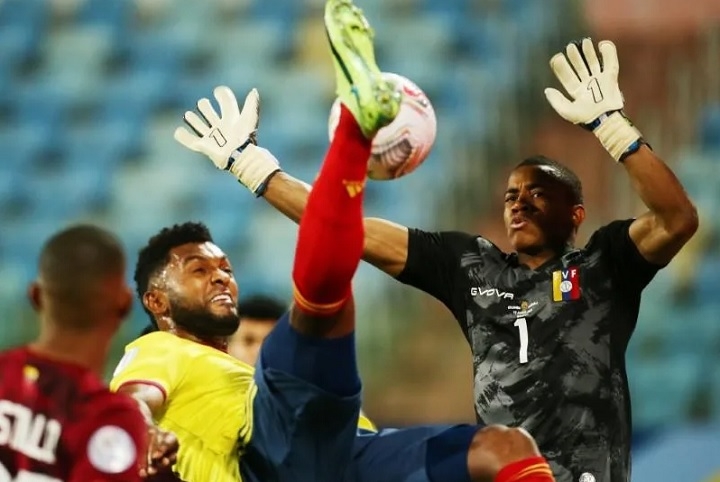 An understrength Venezuela shut out a vastly superior Colombia in a 0-0 draw in the Copa America on Thursday.

Colombia had more than a dozen shots on goal but were thwarted by a combination of poor finishing and stout defending by the Venezuelans. The result takes Colombia to the top of Group B with four points from their first two games, a point ahead of Brazil, who play their second match against Peru later on Thursday.

* Austria's Dominic Thiem withdrew from the Olympics on Thursday, saying he did not feel ready to give his best in Tokyo but was looking forward to competing at Wimbledon this month and defending his US Open title later this year.

* Andy Murray's grasscourt return was cut short in brutal fashion at Queen's Club as Italian top seed Matteo Berrettini dished out a 6-3 6-3 defeat to the former world number one on Thursday (Jun 17). The 34-year-old two-time Wimbledon champion, playing in his first singles tournament on grass for three years, could not handle the ferocious pace of Berrettini as he slid to defeat.

* Rafael Nadal pulled out of Wimbledon and the Tokyo Olympics on Thursday (Jun 17), saying he took the decision after consultations with his team in a bid to prolong his career. The 35-year-old Spaniard said that the two-week gap between the French Open and Wimbledon - which starts on Jun 28 - was not enough time for him to recuperate after a demanding clay court season where he played in five tournaments.

* The Gresini MotoGP team announced on Thursday a deal to use Ducati bikes for the next two seasons with an all-Italian line-up of Enea Bastianini and Fabio di Giannantonio. Gresini, currently partnering Aprilia, signed a contract with MotoGP rights holders Dorna last year to revert to being an independent outfit.

* Former England international Ashley Young has joined Aston Villa on a free transfer from Inter Milan, returning to the club a decade after he left for Manchester United, the Premier League side announced on Thursday. Young, 35, has signed a one-year contract with Villa after helping Inter win the Serie A title under Antonio Conte last season.

* AC Milan have signed Chelsea's Fikayo Tomori on a permanent transfer after the defender spent the second half of the 2020-21 season with the Italian side on loan, the Serie A club said in a statement. Milan exercised the option to make the loan deal permanent and said Tomori will remain with the club until June 2025.

* Sergio Ramos broke down in tears, saying leaving Real Madrid was one of the most difficult moments of his life as he bid farewell on Thursday (Jun 17) after 16 years at the club. The defender played 671 games for Real Madrid and will be remembered as one of the club's greatest ever players, having won five La Liga titles and four Champions Leagues.

* Goalkeeping great Gianluigi Buffon has returned to his first club Parma 20 years after leaving, the Italian club announced on Thursday (Jun 17). The 43-year-old has signed a two-year deal with the club, who were relegated from Serie A in 2020-21, after leaving Juventus at the end of his contract.

* Aston Martin announced the signing of Alfa Romeo's chief designer Luca Furbatto on Thursday in what the expanding Formula One team said was the first of a number of significant new appointments. Furbatto, who will take the role of engineering director, is expected to join the Silverstone-based team ahead of the 2022 season.

Gennaro Gattuso and Fiorentina have agreed to part, just over three weeks after the former Italy international was appointed as coach at the Serie A club.

* Dubai Police Cycling Team's Samah Khaled has been provisionally suspended for an anti-doping rule violation, cycling's governing body (UCI) said. A sample taken from Khaled on April 22 tested positive for the anabolic steroid oxandrolone, the UCI said on its website.