Home / Sports
Denmark's Eriksen had cardiac massage on pitch, was able to speak before going to hospital -team doctor
sonnguyen 13-06-2021, 09:03 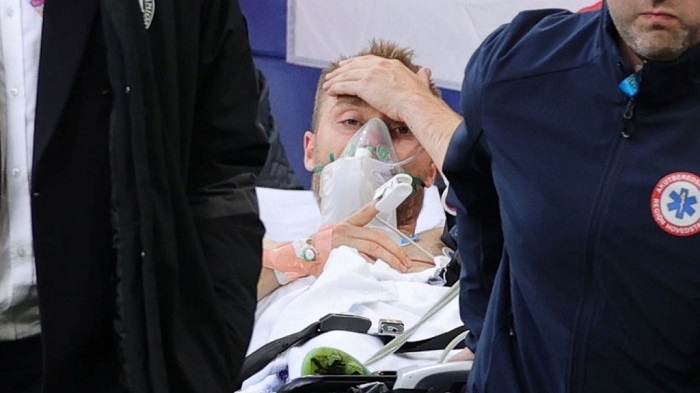 Christian Eriksen is stretchered off the pitch before being taken to hospital. (Photo: Reuters)

Denmark's Christian Eriksen received life-saving cardiac massage treatment on the pitch after collapsing on Saturday in his side's Euro 2020 opening match with Finland but was able to speak before being taken to hospital, team doctor Morten Boesen said.

Eriksen was surrounded by his teammates while being treated on the pitch and then stretchered away. The game was eventually restarted an hour and 45 minutes later after news came through that he had regained consciousness.

"We were called onto the field when Christian collapsed. He was lying on his side when we approached him and there was respiration and pulse," Boesen told a news conference after the game, which Finland won 1-0 with their only goal attempt of the match.

"But that picture changed and he then received life-saving cardiac massage. We quickly got help from the stadium doctor and we got Christian back," he said.

"Christian spoke to me before he was taken to the hospital," said Boesen.

Denmark coach Kasper Hjulmand said several of his players had been too overwhelmed by the incident to finish the match.

"I completely understand that you can't play a soccer match at this level after watching one of your best friends fight for his life," a visibly drained Hjulmand said at the news conference.

"It was more manageable to go in again and honestly just get it over with," Hjulmand said.

Several players, including captain Simon Kjaer who plays for Milan in Italy, were too upset to finish the game, he said.

"Simon Kjaer was deeply, deeply touched. He was in doubt whether he could continue and gave it a shot, but ultimately he couldn't. I completely understand that," Hjulmand said.

A hush fell over the crowd of 16,000 fans while Eriksen received treatment on the pitch, and outside bars around central Copenhagen people gathered, many in tears, while the player's condition remained unclear.

Hjulmand said the players came together in the dressing room, supporting each other and allowing themselves to show their emotions.

"I cannot be more proud of this group of people who take such good care of each other at this time, when a loved one is fighting for his life," he said. "It was a very tough night and we were all reminded what's the most important in life."