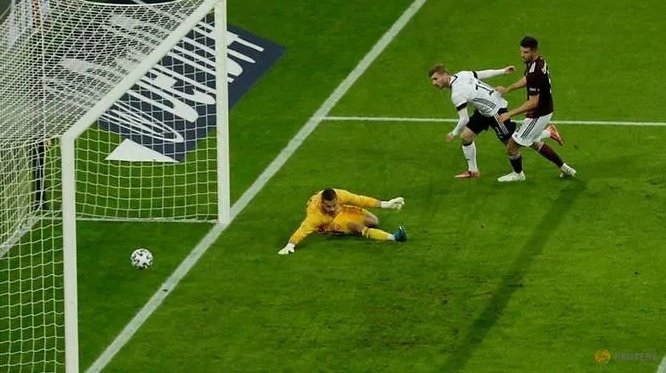 Germany scored five first-half goals on the way to a 7-1 demolition of Latvia on Monday, completing a successful dress rehearsal for their European Championship campaign starting next week.

* Claycourt king Rafael Nadal overcame a wobbly start to subdue Italian teenager Jannik Sinner 7-5 6-3 6-0 on Monday (Jun 7) and book a place in the French Open quarter-finals. Third seed Nadal will face Diego Schwartzman for a place in the semi-finals after beating the Argentine in the last four in the previous edition of the tournament.

* Novak Djokovic survived a major scare from teenager Lorenzo Musetti on Monday (Jun 7) to reach a 15th French Open quarter-final and stay on course to become the first man in more than 50 years to win all four Grand Slams twice. Djokovic's 6-7 (7/9), 6-7 (2/7), 6-1, 6-0, 4-0 win set up a last-eight clash with Matteo Berrettini, another Italian, who progressed after Roger Federer's withdrawal.

* Argentine counter-puncher Diego Schwartzman overcame a sluggish start to book his place in the French Open quarter-finals with a 7-6(9) 6-4 7-5 victory over Germany's Jan-Lennard Struff on Monday (Jun 7).

* Coco Gauff became the youngest Grand Slam quarter-finalist in 15 years on Monday (Jun 7) when she defeated Tunisia's Ons Jabeur at the French Open. Gauff, seeded 24th, swept to a 53-minute 6-3, 6-1 win and will take on Barbora Krejcikova of the Czech Republic for a place in the semi-finals.

* Big-hitting Czech Barbora Krejcikova powered past former finalist Sloane Stephens of the United States 6-2 6-0 in their matchup of unseeded players to reach the quarter-finals of the French Open on Monday.

* Iga Swiatek held off a fierce challenge from Ukraine's Marta Kostyuk to advance into the quarter-finals of the French Open with a 6-3 6-4 victory on Monday (Jun 7). The eighth-seeded Pole has now won 22 consecutive sets at Roland Garros to set up a clash with Greek 17th Maria Sakkari

* Naomi Osaka has pulled out of next week's Berlin WTA grass court tournament in the wake of her controversial exit from the French Open, organisers confirmed on Monday (Jun 7). Osaka has not said when she plans to play next, casting doubt on her participation at Wimbledon, which starts on Jun 28, and the Tokyo Olympics.

* Aston Villa have reached an agreement for the transfer of midfielder Emiliano Buendia from Norwich City, the two Premier League clubs announced on Monday. The clubs did not disclose the transfer fee but British media reported that Villa had agreed a club-record deal worth an initial 33 million pounds (US$46.77 million) for the 24-year-old.

* World Athletics on Monday declared 35 Russian track and field athletes eligible to compete under a neutral flag ahead of the Tokyo Olympics, taking the total count to 62. Russia's athletics federation (RusAF) has been suspended since 2015 after a report commissioned by the World Anti-Doping Agency (WADA) found evidence of mass doping among track and field athletes.

* Singapore fell to another World Cup qualifying defeat on Monday (Jun 7) after a 5-0 loss to Uzbekistan in the Saudi Arabian capital, Riyadh. The latest result leaves them out of the running for the next World Cup.