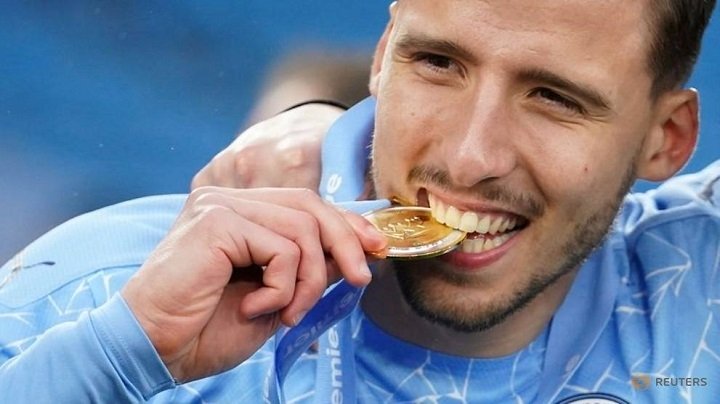 Manchester City's Ruben Dias and Phil Foden were named the Premier League's best player and best young player of the season on Saturday, while City boss Pep Guardiola was named Manager of the Season for a third time.

* A superb first half from winger Emil Forsberg paved the way for Sweden's 3-1 win over Armenia in their last friendly game before Euro 2020 gets underway next week.

* Substitute Aleksandr Sobolev's late penalty earned Russia a 1-0 win over Bulgaria in their final warm-up friendly before the European Championship kicks off next Friday.

* Hwang Ui-jo scored a brace as the Republic of Korea thumped Turkmenistan 5-0 on Saturday to regain first place in Group H in the second phase of Asian World Cup qualifying.

* A relentless Rafa Nadal cruised into the last 16 of the French Open for the 16th time on Saturday, with a brutal 6-3 6-3 6-3 dismantling of Briton Cameron Norrie. Nadal, who won his 13th title at Roland Garros last year, extended his run at the claycourt Grand Slam to an unbelievable 30 sets won in a row

* Roger Federer reached the last 16 of the French Open but needed all of his fighting qualities to scrap his way past Germany's Dominik Koepfer on an empty and eerie Court Philippe Chatrier in Saturday's night match. The 39-year-old 20-time Grand Slam champion was ragged at times and lacked his usual zip against the tenacious Koepfer but the eighth seed slogged his way to a 7-6(5) 6-7(3) 7-6(4) 7-5 victory with the time approaching 1am local time.

* Novak Djokovic cruised into the French Open last 16 for the 12th consecutive year with a 6-1, 6-4, 6-1 victory over Lithuania's 93rd-ranked Ricardas Berankis on Saturday (Jun 5). The world number one will take on Italian 19-year-old and Grand Slam debutant Lorenzo Musetti for a place in the quarter-finals.

* Fourth seed Sofia Kenin rallied from a set down to book a place in the French Open last-16 on Saturday, defeating fellow American Jessica Pegula 4-6 6-1 6-4 on Court Suzanne-Lenglen.

* Teenager Coco Gauff reached the last 16 of the French Open for the first time after fellow American Jennifer Brady quit with a foot injury having lost the first set 6-1 on Saturday.

* Defending champion Iga Swiatek overcame a sluggish start to book her place in the last 16 of the French Open with a 7-6(4) 6-0 victory over Estonian Anna Kontaveit on Saturday.

* Former US Open champion Sloane Stephens overcame an attacking Karolina Muchova at the French Open on Saturday, ousting the Czech 18th seed with a 6-3 7-5 victory and progressing to the fourth round.

* Fifth seed Elina Svitolina crashed out of the French Open with a third-round 6-3 6-2 loss to 33rd-ranked Czech Barbora Krejcikova on Saturday, as the big names in the women's draw continued to fall at the claycourt Grand Slam.

* Three-times Grand Slam champion Stan Wawrinka has pulled out of Wimbledon due to a foot injury that also ruled him out of the ongoing French Open, the governing body of men's tennis (ATP) has said.

* AlphaTauri's Pierre Gasly was surprisingly fastest in final practice for the Azerbaijan Grand Prix on Saturday, as Red Bull's Formula One championship leader Max Verstappen crashed into the barriers. Frenchman Gasly, a winner for the Red Bull-owned team in Italy last season, lapped the Baku street circuit with a best time of one minute 42.251 seconds in an eventful session on a hot afternoon.

* Yamaha's world championship leader Fabio Quartararo claimed his fifth straight pole position of the MotoGP season after going fastest in qualifying at the Catalunya Grand Prix on Saturday. Quartararo became the first rider in seven years to achieve the feat, and the Frenchman is joined on the front row by Ducati's Jack Miller and Pramac Racing's Johann Zarco.

* Jamaican sprint darling Shelly-Ann Fraser-Pryce became the second-fastest woman of all time behind 100 metres world record holder Florence Griffith-Joyner when she clocked 10.63 seconds at a meet in Kingston on Saturday.