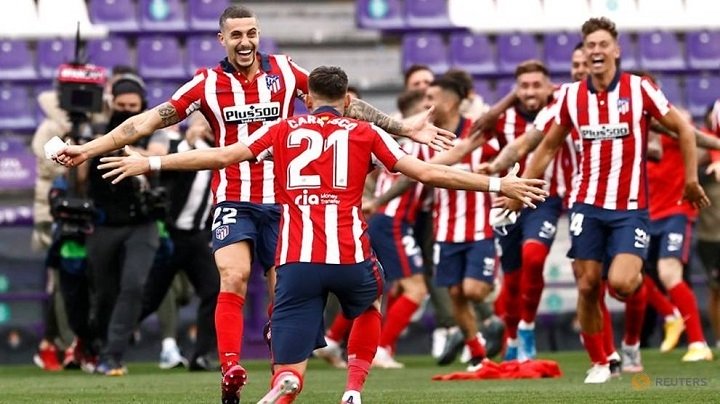 Atletico Madrid won the La Liga title for the first time since 2014 after coming from behind to secure a 2-1 win at Real Valladolid in their final match of the season on Saturday.

They held off nearest challengers Real Madrid by two points to win the championship for the 11th time in the club's history.

* Real Madrid ended the season second in La Liga despite a late 2-1 win over Villarreal at home on Saturday. Real's victory was not enough to win the league as Atletico Madrid beat Valladolid 2-1 to claim their first title since 2014. Real finished the campaign on 84 points, two behind the champions.

* An acrobatic late strike from Antoine Griezmann saw Barcelona confirm their third-place finish in La Liga on Saturday, as they crept past already relegated Eibar 1-0 in their last match of the season. They end the campaign on 79 points, seven behind champions Atletico Madrid and five off second-placed Real Madrid.

* St Johnstone beat Hibernian 1-0 in the Scottish Cup final on Saturday to seal a historic domestic cup double having also won the League Cup this season. Defender Shaun Rooney headed home in the 32nd minute, exactly the same time as his winning goal in the League Cup final against Livingston in February.

* Bayern Munich striker Robert Lewandowski said it felt like being in a "science fiction film" as he scored his 41st Bundesliga goal of the season on Saturday to break Gerd Mueller's 49-year-old German league record for a single campaign. Lewandowski scored in the 90th minute of Bayern's 5-2 home win over Augsburg having equalled Mueller's record of 40, which was set in 1971/72, last weekend.

* Werder Bremen were relegated from the Bundesliga for the first time in 41 years on Saturday (May 22) after a 4-2 thrashing at home by Borussia Moenchengladbach.

* Red Bull's Max Verstappen was fastest in final practice for the showcase Monaco Grand Prix on Saturday with Formula One championship leader Lewis Hamilton struggling in seventh for Mercedes. Verstappen, 14 points behind the Briton after four races, lapped the tight metal-fenced street circuit with a best time of one minute 11.294 seconds and 0.047 ahead of Ferrari's Carlos Sainz.

* Brentford fought back from a goal down to beat 10-man Bournemouth 3-1 in their Championship playoff semi-final second leg on Saturday (May 22) and return to the final at Wembley for the second year in a row. Brentford, who lost the first leg 1-0, conceded an early goal before taking advantage when Bournemouth's Chris Mepham was sent off in the first half to go through 3-2 on aggregate.

* Swansea City moved a step closer to a return to the Premier League after beating Barnsley 2-1 on aggregate in their Championship playoff semi-final, setting up a date with Brentford in the final at Wembley. After the Swans won the first leg 1-0 away at Oakwell earlier this week, the two sides drew 1-1 in Swansea on Saturday.

* Italian rider Lorenzo Fortunato of Eolo-Kometa ground his way up the steep slopes of Monte Zoncolan on Saturday to claim his maiden career win on stage 14 of the Giro d'Italia, a gruelling 205-kilometre ride that began in Cittadella.

* Third seed Casper Ruud claimed his second career title on the ATP Tour after beating Denis Shapovalov 7-6(6) 6-4 in the final of the claycourt Geneva Open on Saturday.

* Italian teenager Benedetta Pilato set a new world record for the 50m breaststroke in the semi-finals of the European Swimming Championships on Saturday (May 22). The 16-year-old clocked 29.30 seconds to better the previous best of 29.40s set by American Lilly King in 2017.