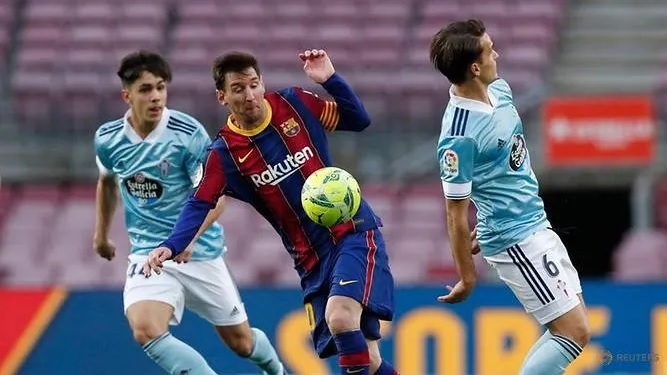 Barcelona saw their hopes of winning La Liga extinguished as they were beaten 2-1 at home by Celta Vigo on Sunday (May 16).

Barca are third on 76 points, four behind Real Madrid in second with one game remaining and two ahead of Sevilla in fourth.

* Tiny Eibar's seven-year adventure in La Liga came to an end on Sunday when they were thrashed 4-1 away to Valencia.

* Villarreal striker Carlos Bacca scored a hat-trick as his side celebrated the return of supporters for the first time in over a year by thrashing Sevilla 4-0 at home in La Liga on Sunday.

* Liverpool goalkeeper Alisson Becker scored a 95th minute winner as the Reds beat West Brom 2-1 on Sunday (May 16) to keep a place in next season's Champions League in their own hands.

* Tottenham Hotspur's England striker Harry Kane scored his 22nd Premier League goal of the season to help his side to a 2-0 home win over Wolverhampton Wanderers on Sunday which boosted their bid to secure European football for next season. After Kane's late first-half strike, Pierre-Emile Hojbjerg grabbed Tottenham's second just past the hour to seal a victory which lifted Ryan Mason's team to sixth in the standings.

* Crystal Palace struck twice in the second half through forward Wilfried Zaha and left back Tyrick Mitchell to secure a 3-2 win over Aston Villa in an entertaining Premier League match at Selhurst Park on Sunday.

* Sheffield United striker Daniel Jebbison became the youngest player to score in his first Premier League start as his early strike condemned Everton to a 1-0 defeat on Sunday that could wreck their European hopes.

* Freshly-crowned German Cup winners Borussia Dortmund booked a Champions League spot for next season with a comfortable 3-1 victory at Mainz 05 on Sunday that made sure of a top-four finish with a game left in the season.

* VfL Wolfsburg squandered a two-goal lead to draw 2-2 at second-placed RB Leipzig on Sunday but still earned a Champions League spot for next season after making sure of a top-four finish. With one game left in the season Wolfsburg are in fourth place, four points ahead of Eintracht Frankfurt.

* AC Milan squandered the chance to secure a long-awaited return to the Champions League as goalkeeper Gianluigi Donnarumma came to their rescue in a 0-0 Serie A draw at home to Cagliari on Sunday.

* Napoli captain Lorenzo Insigne scored to help his side beat 10-man Fiorentina 2-0 and move into provisional third place in the Serie A table on Sunday as they chase a Champions League spot. The win leaves Gennaro Gattuso’s side on 76 points, one point ahead of AC Milan and Juventus in fourth and fifth respectively, before Milan host Cagliari later on Sunday.

* Paris St Germain clung on to their hopes of winning a fourth consecutive Ligue 1 title with a 4-0 home win against 10-man Stade de Reims as Lille's lead was cut to a single point with one game remaining on Sunday.

* Rafa Nadal warmed up for the French Open with a battling 7-5 1-6 6-3 win over world number one Novak Djokovic as the Spaniard claimed a record-extending 10th Italian Open title in Rome on Sunday (May 16) in the latest chapter of their rivalry.

* French Open champion Iga Swiatek served a warning to her rivals ahead of the claycourt Grand Slam with a 6-0 6-0 demolition of former world number one Karolina Pliskova in the Italian Open final on Sunday. The victory in 46 minutes meant the world number 15 from Poland, who shot to fame at Roland Garros last year by beating Sofia Kenin in straight sets in the final, will enter the top 10 for the first time when the new rankings are out on Monday.

* Barcelona put on a brilliant display to beat Chelsea 4-0 to win the Women's Champions League final for the first time in the club's history on Sunday.

* Egan Bernal blew away his rivals on the Giro d'Italia as he won the ninth stage with a brutal, gravity-defying effort in the final climb to claim the race's overall lead on Sunday. The 2019 Tour de France champion produced impressive acceleration inside the last km of a gravel road final section to beat Italian Giulio Ciccone and Russian Aleksandr Vlasov, who were second and third respectively seven seconds behind.

* Lee Kyoung-hoon of the Republic of Korea defied rain, wind and a weather delay to fire a six-under par 66 on Sunday (May 16) to win PGA Tour Byron Nelson by three strokes and book a PGA Championship berth. Lee had eight birdies in his six-under effort at TPC Craig Ranch in the Dallas suburb of McKinney, Texas, his 25-under par total of 263 putting him three clear of American Sam Burns.

* The Asian Football Confederation (AFC) confirmed on Sunday that the DPR Korea has pulled out of next month's qualifying tournament for the 2022 World Cup finals in Qatar. The move comes after the country had already withdrawn from the Olympic Games in Tokyo this summer because of concerns over the COVID-19 pandemic.