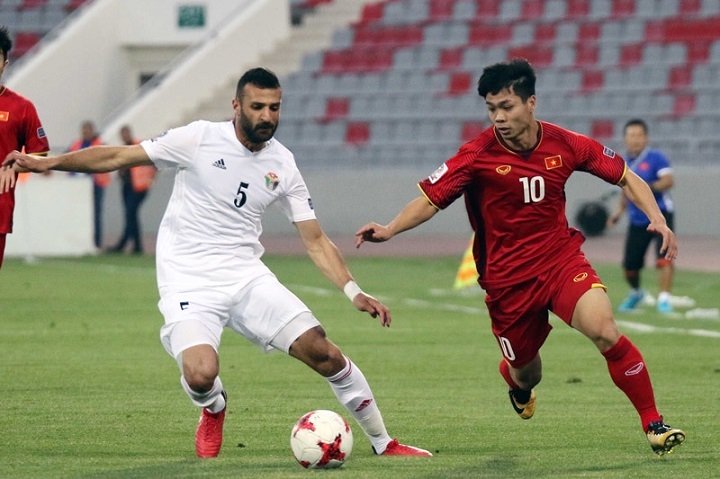 Vietnam's Nguyen Cong Phuong (in red) in action during a clash with the Jordanian team in the past. (Photo: VFF)

NDO – Coach Park Hang-seo’s Vietnamese side will play a friendly match against Jordan in the United Arab Emirates (UAE) on May 31, as part of their preparations for the remaining matches in the second round of the Asian qualifiers for the 2022 FIFA World Cup.

The Vietnam Football Federation (VFF) and the Jordan Football Association (JFA) recently reached an agreement on arranging a friendly between the two national teams as Park’s troops are in the UAE for the World Cup qualifiers.

Given the professional significance to both sides, the match will take place without spectators and reporters, as well as with no limit on substitutions, allowing the coaching staff of both teams to review their forces and playing styles.

In round two of the 2022 World Cup AFC qualifiers, Vietnam are currently leading Group G with 11 points, followed by Malaysia (nine points), Thailand (eight), the UAE (six) and Indonesia (zero).

Meanwhile, Jordan are provisionally third in Group C on 10 points, behind Australia (12 points) and Kuwait (10). The remaining games of Group C will be held at a centralised venue in Kuwait, a neighbouring country of the UAE.

Vietnam last played Jordan in the 2019 Asian Cup’s round of 16, during which Park’s side beat their opponents 4-2 on penalties to advance to the quarterfinals. Earlier, the two teams drew 0-0 (at Thong Nhat Stadium) and 1-1 (at King Abdullah Stadium) in a two-legged qualification tournament.

The Vietnamese national team are currently gathering for a training camp in Hanoi and will depart for the UAE on May 26. They will have four days to practise and get used to the new environment before the friendly match against Jordan.

On June 7, Park’s side will have their first World Cup qualifier in the UAE against Indonesia, before meeting Malaysia on June 11, thereafter ending the second qualifying round with a match against hosts UAE on June 15. All matches will take place at 11:45 pm (Vietnam time).