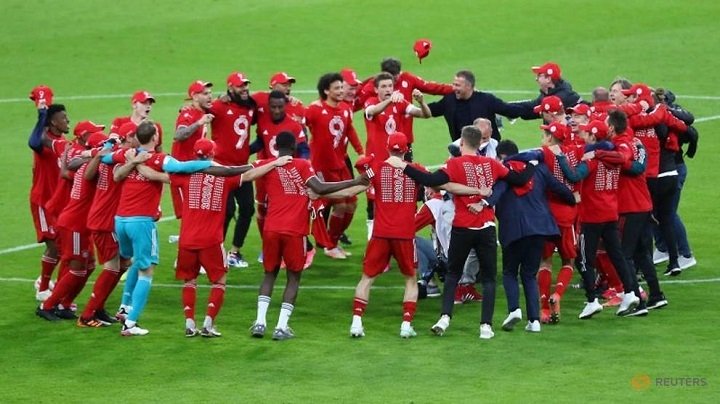 Bayern Munich celebrated their record-extending ninth consecutive Bundesliga title on Saturday with a 6-0 demolition of Borussia Moenchengladbach and a hat-trick from Robert Lewandowski, who edged closer to a 49-year-old scoring record.

* Two goals from Alexis Sanchez helped Inter Milan celebrate their Serie A title success in style with a 5-1 thrashing of Sampdoria at the San Siro on Sunday.

* Manchester City will have to wait a little longer to be crowned Premier League champions after they were beaten 2-1 at home by Chelsea on Saturday. City, who made nine changes for the game, could still secure the title this weekend if second-placed Manchester United lose at Aston Villa on Sunday.

* Tottenham Hotspur's slim hopes of finishing in the Premier League top four faded as goals from Stuart Dallas, Patrick Bamford and Rodrigo condemned them to a 3-1 defeat at Leeds United in a lively game on Saturday. Spurs stayed sixth on 56 points from 35 games, five behind fourth-placed Chelsea who play runaway leaders Manchester City later on Saturday.

* Victor Osimhen scored twice as Napoli beat Spezia 4-1 to move second in Serie A on Saturday to keep in the chase for a return to Champions League football next season. Napoli are one-point ahead of three teams -- Atalanta, Juventus and AC Milan -- who are tied on 69 points before they play this weekend.

* Deflected goals from Christian Benteke and Eberechi Eze gave Crystal Palace a 2-0 win at relegated Sheffield United on Saturday, snapping a run of three league defeats for the London club and guaranteeing their top-flight status next season.

* Barcelona and Atletico Madrid knew victory could fire them towards the La Liga title but a 0-0 draw at Camp Nou on Saturday (May 8) handed Real Madrid the chance to move top of the table. Zinedine Zidane's side know four wins from their last four games will be enough to retain their La Liga crown, with a crunch game at home to fourth-placed Sevilla up first on Sunday.

* Real Madrid captain Sergio Ramos may have played his last game for the club after they announced on Saturday that he had picked up a hamstring injury. Ramos's contract runs out at the end of June and there are only four La Liga games remaining this season.

* Brazil forward Neymar has signed a new contract with Paris St Germain that will keep him in the French capital until 2025, the Ligue 1 club said on Saturday. The 29-year-old Neymar, who joined PSG in 2017 from Spanish club Barcelona for a record transfer fee of 222 million euros (US$270 million), has agreed a deal French media reported will earn him an annual salary of EUR30 million

* Seven-times world champion Lewis Hamilton became the first Formula One driver to take 100 pole positions after lapping fastest in Spanish Grand Prix qualifying on Saturday (May 8). The 36-year-old Mercedes driver was already the record holder by a massive margin, with retired Ferrari great and fellow seven-times champion Michael Schumacher second on the list with 68.

* Alexander Zverev produced an impressive display to beat Dominic Thiem in straight sets on Saturday (May 8) and book his spot in the Madrid Open final, where he will face Matteo Berrettini. Fifth seed Zverev, who stunned five-time champion Rafael Nadal in the quarter-finals on Friday, saw off Thiem 6-3, 6-4 in a repeat of the 2018 final, which was also won by the German.

* Aryna Sabalenka was in ominous form as she overpowered world number one Ash Barty 6-0 3-6 6-4 to win the Madrid Open on Saturday. In claiming victory, the Belarusian gained revenge after being beaten by the Australian in the Stuttgart Open final a fortnight ago.